Pentagon to send about 800 troops to Mexican border: US official 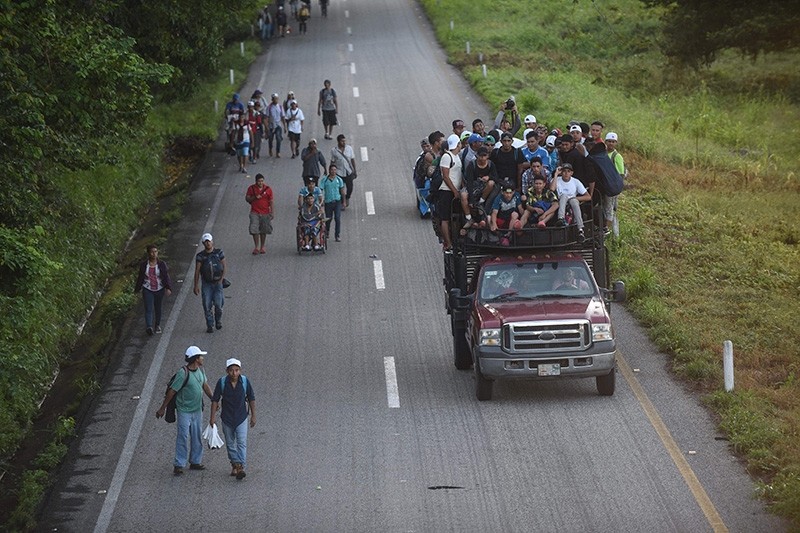 Honduran migrants heading in a caravan to the US, travel on foot or atop vehicles in Mapastepec on their way to Pijijiapan Chiapas state, Mexico, on Oct. 25, 2018. (AFP Photo)
by Compiled from Wire Services Oct 25, 2018 12:00 am

The Pentagon will send "several hundred" troops to the United States-Mexico border, a U.S. official said Thursday, after President Donald Trump said the military would be used to tackle a "national emergency" on the border.

Speaking on condition of anonymity, the official said the troops would be used mainly to provide logistical support including tents, vehicles and equipment.

Defense Secretary Mattis is expected to sign an order to send at least 800 troops to the border, according to a source cited by the Associated Press.

The report comes after President Donald Trump said earlier Thursday he was "bringing out the military" to protect the U.S. border as a caravan of Central American migrants continued a slow trek through Mexico toward the United States, but provided no details.

Despite raising Trump's ire, thousands of Central American men, women and children seeking to escape violence, poverty and government corruption in their home countries continued their journey toward the distant U.S. border. Under a full moon early on Thursday, they walked from Mapastepec, close to the Guatemala border in southern Mexico. A town official said there had been 5,300 migrants in Mapastepec on Wednesday night.

A second group of more than a thousand people has started a similar journey from Guatemala.

"I am bringing out the military for this National Emergency. They will be stopped!" Trump wrote on Twitter, referring to the migrants.

White House and Pentagon officials did not immediately respond to requests for comment on Trump's comments regarding a military deployment and a national emergency.

Trump has taken a hard line toward immigration - legal and illegal - since becoming president last year. On Monday, Trump said he had alerted the Border Patrol and the U.S. military that the migrant caravan was a national emergency.

A Pentagon spokesman said Monday that while the National Guard troops are supporting Department of Homeland Security personnel on the border, the Defense Department had not been asked to provide additional support.

Trump and his fellow Republicans have sought to make the caravan and immigration major issues ahead of the Nov. 6 U.S. congressional elections in which the party is trying to maintain control of the House of Representatives and the Senate.

It is not new territory for Trump, who pledged during the 2016 presidential race to build a wall along the southern U.S. border with Mexico. However, funding for his signature campaign promise has been slow to materialize even though his party controls Congress and the White House.

In April, frustrated by lack of progress on the wall, Trump ordered the National Guard to help secure the border in four southwestern states. There are currently 2,100 National Guard troops along the borders of Texas, New Mexico, Arizona and California.

Also in April, Trump raised the prospect of sending active-duty military forces to the border to block illegal immigration, raising questions in Congress and among legal experts about troop deployments on American soil.

A federal law dating to the 1870s restricts the use of the Army and other main branches of the military for civilian law enforcement on U.S. soil unless specifically authorized by Congress. But the military can provide support services to law enforcement and has done so on occasion since the 1980s.

Some specific statutes authorize the president to deploy troops within the United States for riot control or relief efforts after natural disasters.