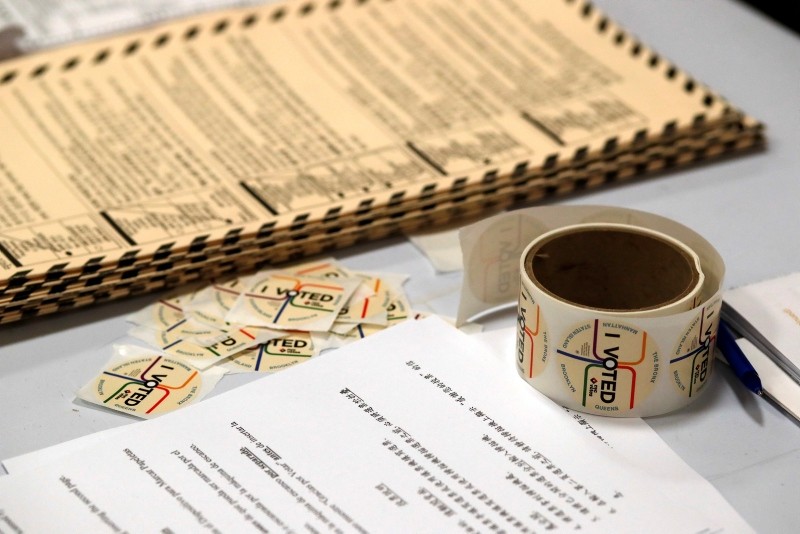 In addition to elections for the U.S. House of Representatives and state assemblies, voters in 37 states headed to the polls Tuesday on wide-ranging issues including healthcare, voting rights, minimum wage, abortion, LGTBQ rights and marijuana use.

In all, 155 statewide initiatives were on the ballot across the country. Most were drafted by state legislatures, but 64 resulted from citizen-initiated campaigns, including many of the most eye-catching proposals.

In the first statewide referendum on transgender rights, Massachusetts voters on Tuesday beat back a repeal attempt and reaffirmed a 2016 law extending nondiscrimination protections to transgender people, including their use of public bathrooms and locker rooms.

The outcome in Massachusetts was a huge relief to LGBT-rights activists, who feared that a vote to repeal the 2016 law would prompt a wave of similar efforts to roll back protections in other states. Already, some protections at the federal level are under threat from President Donald Trump's administration.

"When transgender rights are being threatened nationally, we absolutely must preserve the rights we have secured at the state level," said Carol Rose, executive director of the American Civil Liberties Union of Massachusetts.

Civil-rights activists also scored a major victory in Florida, where voters approved a ballot measure that will enable more than 1 million ex-felons to regain their voting rights. That could alter the future election landscape in the nation's most populous swing state.

With the vote in Florida, most felons will automatically have their voting rights restored when they complete their sentences or go on probation. The amendment exempts those convicted of sex offenses and murder.

"For too long, Florida has been an extreme outlier — our state's lifetime voting ban was the single most powerful voter suppression tactic in the country," he said.

Floridians also approved a measure aimed at phasing out greyhound racing in the state, the last stronghold of the sport in the U.S.

The greyhound measure will ban betting on greyhound races starting in 2021. The sport remains active in five other states, but may be too small-scale to survive.

Proponents said racing is inherently cruel, pointing to the average of two deaths weekly from illness or injury among Florida's 8,000 racing dogs.

In animal rights, California adopted the Proposition 12 which introduced new minimum requirements on farmers to provide more space for egg-laying hens, breeding pigs, and calves raised for veal. The measure also requires egg-laying hens to be raised cage-free by 2022.

A minimum wage increase was approved in two states. An Arkansas measure will raise the wage from $8.50 an hour to $11 by 2021; Missouri's will gradually raise the $7.85 minimum wage to $12 an hour.

Proposals to change the redistricting process so it's potentially less partisan were approved in Missouri, Colorado and Michigan. A similar proposal was on the ballot in Utah.

Medicaid expansion was another multistate topic, on the ballot because Republican-led legislatures refused to take advantage of expanded coverage offered under President Barack Obama's health care law. Nebraska and Idaho voters approved measures to expand Medicaid health coverage to tens of thousands of low-income residents; a similar measure was on the ballot in Utah, while a Montana measure would raise tobacco taxes to extend an existing expansion.

Michigan voters made their state the first in the Midwest to legalize recreational marijuana by passing a ballot measure that will allow people 21 or older to buy and use the drug. A similar measure was defeated in North Dakota, meaning there are now 10 states that allow recreational use of pot. South Dakotans rejected a tax hike for tobacco products, which would be used for funding in the state's technical schools and lower student tuitions.

Missouri became the 31st state to approve the medical use of marijuana, while Utah was considering that step.

"Western and northeastern states have led the way on legalizing marijuana, but the victory in Michigan powerfully demonstrates the national reach of this movement," said Maria McFarland Sanchez-Moreno, executive director of the Drug Policy Alliance, who questioned how long the federal government could resist the legalization wave.

In Michigan's southern neighbor Ohio, voters defeated an ambitious proposal to make drug possession a misdemeanor in an effort to reduce the state prison population and divert any savings to drug treatment.

While liberal-leaning groups succeeded in getting some of their favored policy proposals on the ballot in Republican-controlled states, the partisan pattern was reversed in a few states.

In Democratic-leaning Oregon, conservatives unsuccessfully targeted two policies. Voters there upheld a law allowing use of state money to pay for low-income women to have abortions, and also reaffirmed a "sanctuary state" law forbidding law enforcement agencies from using state resources or personnel to arrest people whose only crime is being in the U.S. illegally.

However, Voters in Alabama and West Virginia on Tuesday passed ballot measures that could pave the way for new limits or a full ban on abortion in those states if the conservative-majority U.S. Supreme Court overturns the 1973 ruling that legalized abortion.

The U.S. Supreme Court, in its landmark 1973 Roe v. Wade decision, legalized abortion nationwide, and the justices have reaffirmed a woman's constitutional right to have an abortion in subsequent rulings since then. Abortion opponents hope the addition of President Donald Trump's appointee Brett Kavanaugh to the Supreme Court, replacing a retired justice who had protected abortion rights and cementing a 5-4 conservative majority, will lead to a dramatic scaling back or outright reversal of abortion rights recognized under the 1973 ruling.

In Alabama, an amendment to the state's constitution to formally "recognize and support the sanctity of unborn life and rights of children, including the right to life" was leading by a margin of 59 percent to 40 percent with 96 percent of precincts counted.

In West Virginia, a ballot measure amending the state's constitution to say that "nothing in this constitution secures or protects a right to abortion or funding of abortion" was ahead 51 percent to 48 percent with 54 out of 55 precincts reporting.

Another issue in Alabama was the display of the Ten Commandments on state and public property including schools, which was approved by 70 percent of voters.

Climate change was an issue in Arizona, where voters defeated a measure that would have required 50 percent of electricity to come from renewable sources by 2030. Colorado voters rejected a measure that could have sharply reduced oil and gas drilling, including the method known as fracking, by requiring new oil and gas wells to be farther from occupied buildings than allowed under current law.

In the state of Washington, an initiative to introduce a fee on carbon dioxide emissions – a first in the U.S. - was rejected, even though the state tends to vote Democrat and has a liberal agenda.

However, the state introduced a tough new gun control legislature, which introduced 21 as the minimum age for gun purchases in addition to background checks and waiting periods.

In Nevada, voters opted to reveal the sales and storage tax on feminine hygiene products.