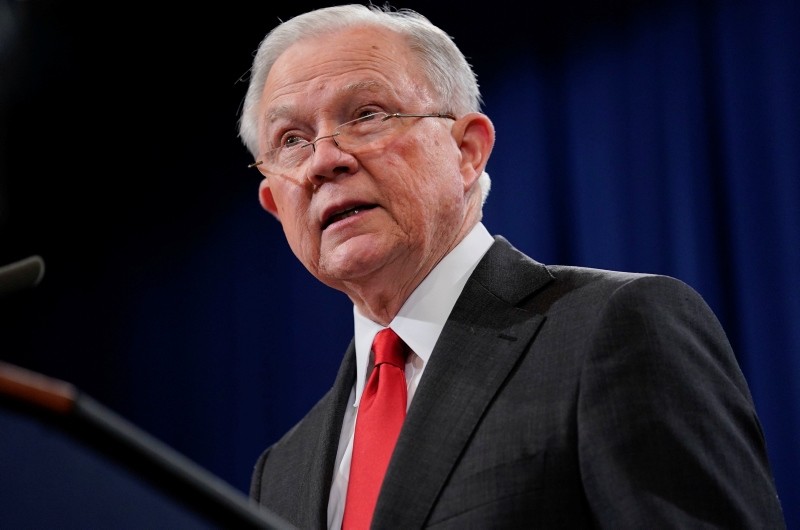 U.S. Attorney General Jeff Sessions resigned at the request of President Donald Trump in a move that raised questions about the fate of the Justice Department probe into Russian meddling in the 2016 election

Attorney General Jeff Sessions resigned Wednesday as the country's chief law enforcement officer after enduring more than a year of blistering and personal attacks over his recusal from the Russia investigation.

Sessions announced his resignation in a letter to President Donald Trump. He said the resignation came at "your request."

Trump announced in a separate tweet that he was naming Sessions' chief of staff Matthew Whitaker, a former United States attorney from Iowa, as acting attorney general.

The resignation was the culmination of a toxic relationship that frayed just weeks into the attorney general's tumultuous tenure, when he stepped aside from the investigation into potential coordination between the president's campaign and Russia.

Trump blamed the decision for opening the door to the appointment of special counsel Robert Mueller, who took over the Russia investigation and began examining whether Trump's hectoring of Sessions was part of a broader effort to obstruct justice and stymie the probe.

Mueller, operating under the auspices of the Justice Department, is pursuing a wide-ranging Russia investigation that already has yielded a series of criminal charges against several of Trump's associates and has dogged his presidency.

Acting Attorney General Matthew Whitaker will now oversee the Russia probe and all other matters under the Justice Department's purview, a department spokeswoman said Wednesday.

"The Acting Attorney General is in charge of all matters under the purview of the Department of Justice," spokeswoman Sarah Isgur Flores said when asked if Whitaker would oversee Mueller's investigation.

"Given his previous comments advocating defunding and imposing limitations on the Mueller investigation, Mr. Whitaker should recuse himself from its oversight for the duration of his time as acting attorney general," Schumer said in a statement.

Pelosi called Trump's firing of Sessions a "blatant attempt" to undermine and end the Russia investigation. She called on Whitaker to recuse himself from any involvement in the probe, citing what she called his "record of threats to undermine & weaken" it.

"Congress must take immediate action to protect the rule of law and integrity of the investigation," she said, echoing a call earlier in the day from the No. 2 Democrat in the House, Steny Hoyer.

Sessions' departure was widely expected to come soon after Tuesday's congressional elections in which Republicans retained their majority in the Senate but lost control of the House of Representatives.

Never in modern history has a president attacked a Cabinet member as frequently and harshly in public as Trump did Sessions, 71, who had been one of the first members of Congress to back his presidential campaign in 2015.