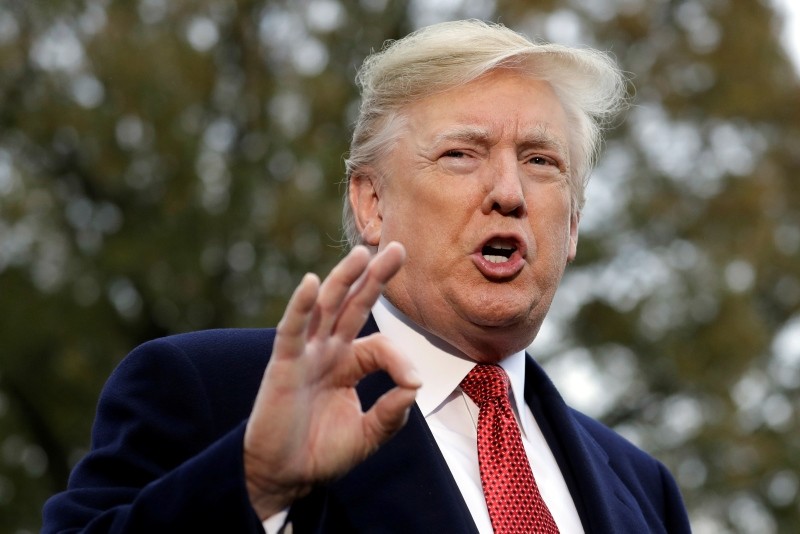 President Donald Trump talks to the media before boarding Marine One on the South Lawn of the White House, Friday, Nov. 9, 2018, in Washington. (AP Photo)
by Compiled from Wire Services Nov 09, 2018 12:00 am

U.S. President Donald Trump said Friday that he signed an immigration proclamation, an order that would help effectively ban migrants who cross the U.S. border with Mexico illegally from qualifying for asylum.

The Trump administration unveiled new rules on Thursday to sharply limit migrant asylum claims by barring individuals who cross the U.S. southern border illegally from seeking asylum. People have to come into the United States at points of entry, Trump said before leaving for Paris.

The move on Friday was spurred in part by caravans of Central American migrants slowly moving north on foot, but officials say it will apply to anyone caught crossing illegally.

The proclamation puts into place regulations adopted Thursday that circumvent laws stating that anyone is eligible for asylum no matter how he or she enters the country.

"We need people in our country but they have to come in legally and they have to have merit," Trump said Friday as he prepared to depart for Paris.

Administration officials say the measures are in effect for at least three months, but could be extended. They go into effect Saturday and don't affect people who are already in the country.

Officials say the measure is meant to funnel asylum seekers through official border crossings for speedy rulings instead of having them try to circumvent such crossings on the nearly 2,000-mile (3,200-kilometer) stretch.

The busy ports of entry already have long lines and waits, forcing immigration officials to tell some migrants to return to make their claims.

The move was spurred in part by caravans of Central American migrants slowly moving north on foot but will apply to anyone caught crossing illegally, officials said. It's unknown whether those in the caravan, many fleeing violence in their homeland, plan to cross illegally.

Administration officials said those denied asylum under the proclamation may be eligible for similar forms of protection if they fear returning to their countries, though they would be subject to a tougher threshold. Those forms of protection include "withholding of removal" — which is similar to asylum, but doesn't allow for green cards or bringing families — or asylum under the United Nations Convention Against Torture.

Homeland Security officials said they were revising staffing at the border crossings manage the crush, but it's not clear how migrants, specifically families, would be held as their cases are adjudicated. Family detention centers are largely at capacity. Trump has said he wanted to erect "tent cities," but nothing has been funded or decided.

The U.S. is also working with Mexico to send some migrants back across the border. Right now, laws allow only Mexican nationals to be swiftly returned.

The announcement was the latest push to enforce Trump's hardline stance on immigration through regulatory changes and presidential orders, bypassing Congress which has not passed any immigration law reform. But those efforts have been largely thwarted by legal challenges and, in the case of family separations this year, stymied by a global outcry that prompted Trump to scrap them.

The new changes were likely to be met with legal challenges, too. Omar Jadwat, director of the American Civil Liberties Union's Immigrants' Rights Project, said Thursday they were clearly illegal.

"U.S. law specifically allows individuals to apply for asylum whether or not they are at a port of entry. It is illegal to circumvent that by agency or presidential decree," he said.

Curbing immigration has been a signature issue for Trump, who pushed it hard in the days leading up to Tuesday's midterm elections, railing against the caravans that are still hundreds of miles from the border.

He has made little mention of the issue since the election but has sent troops to the border in response. As of Thursday, there are more than 5,600 U.S. troops deployed to the border mission, with about 550 actually working on the border in Texas. The military is expected to have the vast majority of the more than 7,000 troops planned for the mission deployed by Monday, and that number could grow.

Trump also suggested he'd revoke the right to citizenship for babies born to non-U.S. citizens on American soil and erect massive "tent cities" to detain migrants. Those issues were not addressed by the regulations. But Trump insisted the citizenship issue would be pushed through.

The administration has long said immigration officials are drowning in asylum cases partly because people falsely claim asylum and then live in the U.S. with work permits.

The asylum section of the Immigration and Nationality Act says a migrant is allowed to make a claim up to a year after arriving in the U.S., and it doesn't matter how they arrive — illegally or through a border crossing.

Migrants who cross illegally are generally arrested and often seek asylum or some other form of protection. Claims have spiked in recent years, and there is a backlog of more than 800,000 cases pending in immigration court. Generally, only about 20 percent of applicants are approved.

Trump has long said those seeking asylum should come through legal ports of entry. But many migrants are unaware of that guidance, and official border crossings have grown clogged.

Officials have turned away asylum seekers at border crossings because of overcrowding, telling them to return later. Backlogs have become especially bad in recent months at crossings in California, Arizona and Texas, with some people waiting five weeks to try to claim asylum at San Diego's main crossing.

In 2017, the U.S. fielded more than 330,000 asylum claims, nearly double the number two years earlier and surpassing Germany as highest in the world.

It's unclear how many people en route to the U.S. will even make it to the border. About 4,800 migrants are sheltered in a sports complex in Mexico City, some 600 miles (965 kilometers) from the U.S. border. Several smaller groups were trailing hundreds of miles to the south; officials estimated about 7,000 in all were in the country in the caravans. The migrants are largely poor people and many say they're fleeing violence; more than 1,700 were children under 18, and more than 300 were children under age 5.

Similar caravans have gathered regularly over the years and have generally dwindled by the time they reach the southern border. Most have passed largely unnoticed.

The Trump administration lost a court bid on Thursday, when a federal appeals court in California ruled that it must continue a program begun under former President Barack Obama that protects hundreds of thousands of illegal immigrants who were brought into the country as children, known as Dreamers.

Trump said the ruling on the Deferred Action for Childhood Arrivals (DACA) program was good news because now the administration can appeal the case to the U.S. Supreme Court.