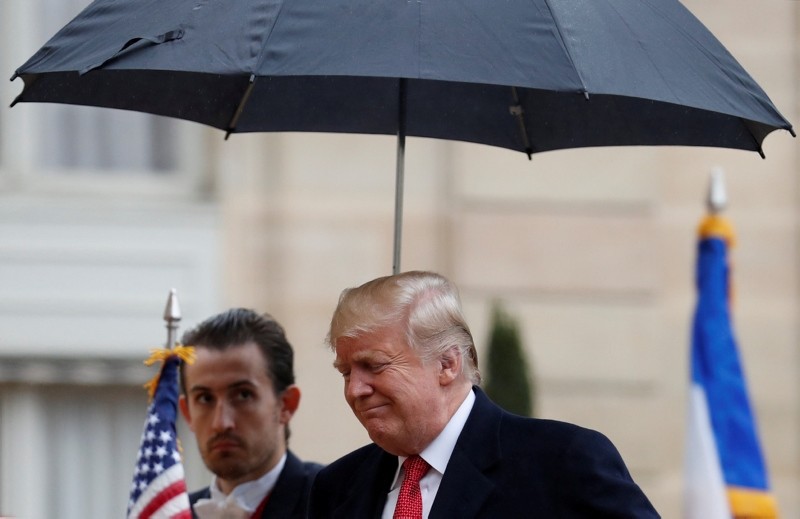 US President Donald Trump arrives to meet France's President Emmanuel Macron at Elysee presidential palace, as part of the commemoration ceremony for Armistice Day, 100 years after the end of the World War I, in Paris, Nov. 10, 2018. (Reuters Photo)
by Nov 10, 2018 12:00 am

U.S. President Donald Trump came under fire on Saturday after canceling a visit to an American World War I military cemetery in France because of rainy weather.

Trump, who is in France for commemorations marking the centenary of the end of the war, and his wife Melania were to have flown by helicopter to the Belleau Wood battlefield and cemetery where U.S. Marines faced off against German forces in 1918.

"The President and First Lady's trip to Ainse-Marne American Cemetery and Memorial has been canceled due to scheduling and logistical difficulties caused by the weather," a White House statement said.

Some saw Trump's no-show in Belleau Wood as a sign of disrespect to U.S. soldiers who fought and died in the trenches.

More than 7,000 were killed or wounded in the June 1918 battle at Bellau Wood and the cemetery contains the graves of 2,289 war dead.

The visit was one of two Trump had planned to war cemeteries on a weekend coinciding with Veterans Day in the U.S.

The cancellation drew derision from some critics, with several suggesting he was afraid of messing up his hair and others noting that the rain had not stopped French President Emmanuel Macron, German Chancellor Angela Merkel or Canadian Prime Minister Justin Trudeau from visiting memorials.

"They died with their face to the foe and that pathetic inadequate @realDonaldTrump couldn't even defy the weather to pay his respects to The Fallen," tweeted Nicholas Soames, a British Conservative member of parliament and grandson of Winston Churchill.

"Donald Trump complained about having to stand in the rain, to speak about the massacre in Pittsburgh, because it messed his hair up (more)," the VoteVets veterans lobby group tweeted.

"Today, he will skip honoring fallen American heroes of WWI, and stay in his hotel room, because of some rain."

Trump was compared unfavorably by some to his Democratic predecessor Barack Obama.

"Unlike Trump, a little rain never stopped President Obama from honoring our fallen war heroes on Veterans Day," former Pentagon official Adam Blickstein tweeted along with a picture of Obama carrying a wreath at a rain-soaked remembrance ceremony.

Ben Rhodes, who served as deputy national security adviser for strategic communications under President Barack Obama, said the excuse about the inclement weather did not stand up.

"I helped plan all of President Obama's trips for 8 years," he wrote on Twitter. "There is always a rain option. Always."

But while some questioned why Trump had not made the hour-long journey by road, White House insiders noted that organizing a presidential motorcade, typically involving dozens of vehicles, would be a tall order at the last minute.

On Sunday, Trump is scheduled to visit a cemetery in the Paris suburb of Suresnes.

He will also join around 70 other world leaders for a solemn ceremony at the tomb of the Unknown Soldier under the Arc de Triomphe in Paris.

On Saturday, Macron and Merkel traveled to Compiegne in northeast France to unveil a plaque in the forest clearing where the World War 1 armistice was signed.