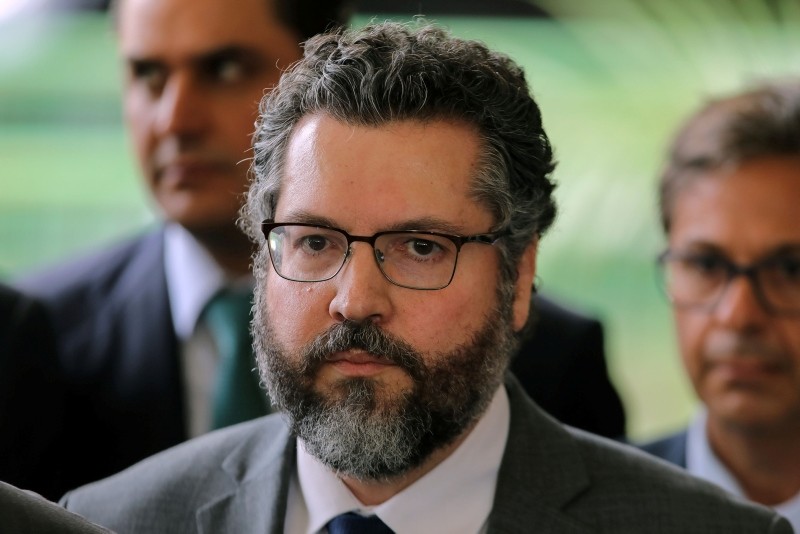 Brazilian diplomat Ernesto Araujo, who was appointed by Brazilian President-elect Jair Bolsonaro as Foreign Minister, is pictured at the headquarters of the transitional government in Brasilia, on Nov. 14, 2018. (AFP Photo)
by Daily Sabah with Wires Nov 16, 2018 12:00 am

Araujo, who now heads the foreign ministry's department for the United States, Canada and Inter-American affairs, is anti-left and a self-proclaimed nationalist, and he campaigned for Bolsonaro, who was elected Oct. 28.

In a blog post on Oct. 12, Araujo called climate science a "dogma" and said it was a part of a higher cause of cultural Marxists to promote the growth of China.

"This dogma has been used to justify increasing the regulatory power of states over the economy and the power of international institutions on the nation states and their populations, as well as to stifle economic growth in democratic capitalist countries and to promote the growth of China," he wrote.

The 51-year-old diplomat of the newly-formed government which came to power in January when Bolsonaro took 55 percent of the votes also wrote that anonymous leftist politicians came up with the environmentalism movement just to attain their goal of world domination.

"The left has appropriated the environmental cause and perverted it to the point of paroxysm over the last 20 years with the ideology of climate change, the climatism," he said, dismissing all evidence on the topic and claiming that they were 'selective' and 'politically motivated'.

Araujo has in the past also blogged about other controversial topics, including the criminalization of red meat, oil and heterosexual sex.

He has also raised some eyebrows for praising Trump's approach to foreign relations, saying the U.S. leader proposes a view of the West that is based on the recovery of its symbolic past. The Brazilian diplomat also believes globalism is an anti-Christian ideology.In 1992, when the international community came together for the first time to discuss reducing greenhouse gas emissions, Brazil played a crucial role during the signing of the Paris agreement in 2015.

Once threating to quit the Paris agreement and merge the ministries of agriculture and environment, Bolsonaro had back-pedaled from his decision after international pressure and out of the fear of losing soy and beef sales in Europe.

"Brazil has played a very significant role for the Paris agreement. It would be really bad for the country's image if he brings with him his ideology," Carlos Rittl, the executive secretary of the Brazilian Climate Observatory, told The Guardian.

Climate advocates in the country still hope that the government will come to the realization that a healthy and intact Amazon and a stable global environment is a much needed opportunity for both the country's crops and the economy, although latest figures have shown the opposite, indicating a rise in deforestation.