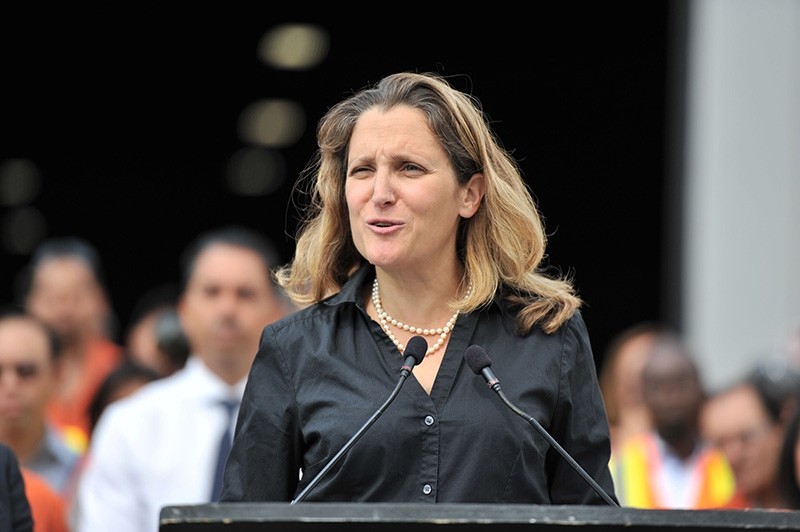 In this file photo taken on August 24, 2018, Canada's Minister of Foreign Affairs Chrystia Freeland speaks at the Tree Island Steel Company, in Richmond, British Columbia. (AFP Photo)
by Nov 29, 2018 12:00 am

Canada announced targeted sanctions Thursday against 17 Saudi nationals it said were linked to the murder of journalist Jamal Khashoggi in Istanbul last month.

The sanctions, which freezes their assets and bars their travel to Canada, "target individuals who are, in the opinion of the government of Canada, responsible for or complicit in the extrajudicial killing of journalist Jamal Khashoggi on October 2, 2018," Foreign Affairs Minister Chrystia Freeland said in a statement.

At the same time, Ottawa continued to call for "a transparent and rigorous accounting of the circumstances" surrounding Khashoggi's murder, saying that "the explanations offered to date by Saudi Arabia lack consistency and credibility."

"The murder of Jamal Khashoggi is abhorrent and represents an unconscionable attack on the freedom of expression of all individuals," Freeland also told a press conference in Buenos Aires on the sidelines of the G20 summit.

"This case is not closed," she said. "Those responsible for Jamal Khashoggi's murder must be held to account and must face justice."

Saudi Arabia has said that 21 people are in custody, with death penalties sought against five men.

International pressure has mounted on Riyadh to find those responsible for the grisly murder of Khashoggi, a U.S. resident who wrote for The Washington Post and had been critical of Prince Mohammed.

A recent CIA analysis leaked to the U.S. media reportedly pointed the finger at Prince Mohammed, though Saudi prosecutors have said he had no role in the killing.

The Canadian sanctions target individuals alleged to be members of a Saudi hit squad that carried out the killing, as well as close aides of the prince.

They come after allies France, Germany and the United States imposed similar sanctions on these individuals.