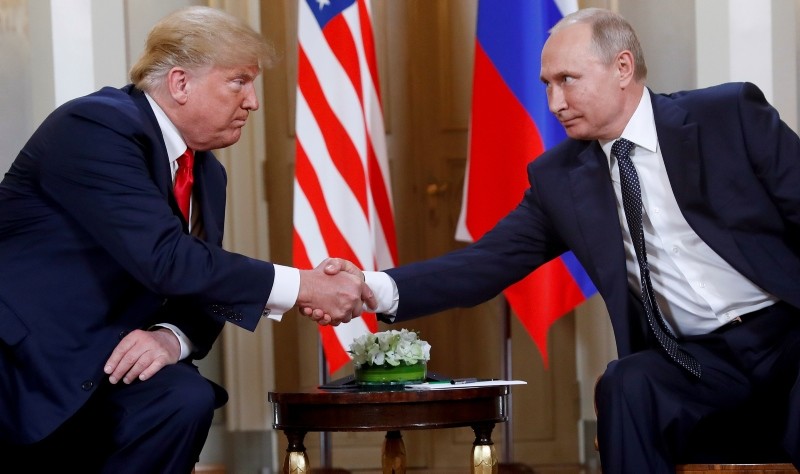 U.S. President Donald Trump, left, and Russian President Vladimir Putin shake hands at the beginning of a meeting at the Presidential Palace in Helsinki. (AP Photo)
by Dec 08, 2018 12:00 am

US prosecutors have revealed that a Russian offered cooperation to Donald Trump's campaign as early as 2015, declaring that the president's ex-lawyer Michael Cohen had provided "relevant" and "substantial" help to the Russia investigation.

In a separate case, federal prosecutors Friday demanded "substantial" jail time of between 51 to 63 months -- four to five years -- for Cohen for bank fraud and campaign finance violations to which he plead guilty in August.

US Attorney Robert Khuzami accused the 52-year-old, who once vowed to take a bullet for the president, of being motivated by "personal greed" and of "repeatedly" using his power and influence for "deceptive ends."

"Totally clears the President. Thank you!" Trump tweeted cryptically as television networks were consumed by the Cohen documents -- which the White House dismissed as revealing "nothing of value."

In the 40-page document Khuzami drew a direct link between Cohen's illegal behavior and Trump.

"In particular, and as Cohen himself has now admitted, with respect to both payments, he acted in coordination with and at the direction of Individual-1," the document reads, referring to Trump.

Robert Mueller, the special counsel heading up the probe into Russian meddling in the 2016 vote, followed up with a separate filing saying Cohen had made "substantial and significant efforts to remediate his misconduct, accept responsibility for his actions, and assist" the special investigation, a thorn in Trump's side.

Cohen continued to provide "relevant and truthful information" to assist the probe, holding seven sessions with investigators, "many of them lengthy, and continues to make himself available to investigators," it said.

Around November 2015, some five months after Trump launched his bid for the presidency and well before previously reported contacts, Cohen spoke to a purported "trusted person" in the Russian Federation who offered the campaign "political synergy" and "synergy on a government level."

Cohen said the unidentified person "repeatedly proposed" a meeting between Trump and Russian President Vladimir Putin, claiming it could have a "phenomenal" impact "not only in political but in a business dimension as well."

"Cohen, however, did not follow up on this invitation," the filing added.

The former fixer last week pleaded guilty to lying to Congress in connection with a Moscow real estate deal, which was being pursued as late as one month before Trump officially became the Republican nominee for president.

Due to his help, Mueller declined to recommend additional jail time for Cohen for lying to Congress.

Recent filings in the Mueller probe have suggested the White House knew that Cohen planned to lie to lawmakers about his contacts with Russians.

They also suggest Trump and his family were in the loop on discussions with Russians on a Moscow project, even after the real estate tycoon secured the Republican nomination in mid-2016.

Trump's spokeswoman Sarah Sanders dismissed the latest filings in Cohen's case, saying they "tell us nothing of value that wasn't already known."

"Mr Cohen has repeatedly lied and as the prosecution has pointed out to the court, Mr Cohen is no hero," she said.

But Mueller has been inching ever closer to the White House, and early on Friday Trump fired off a feverish volley of tweets against a probe he dubs a "witch hunt," accusing Mueller of "big time conflicts of interest" and alleging the prosecutor coerced false testimony from witnesses.

The commander-in-chief vowed his lawyers would produce a "major Counter Report" to rebut Mueller's findings, as and when he delivers them.

For House Democrat John Garamendi, these may be "the opening days of an impeachment."

Trump is a president "that clearly has surrounded himself with criminals," he told CNN.

"During the campaign, laws were broken... And now we have the president implicated in that," he said.

Trump on Friday announced his intention to nominate William Barr as his new attorney general -- succeeding Jeff Sessions, whom he sacked last month.

Sessions had angered the president by recusing himself from overseeing the Mueller probe because of his own contacts with Russian officials.

Barr -- a former attorney general under the late George H.W. Bush -- is considered something of a consensus candidate for the sensitive post.

He has a record of endorsing strong executive powers, which could come into play if Mueller sought to compel Trump to testify.

Senate Democratic leader Chuck Schumer warned Barr must commit, under oath, that the Russia investigation "will proceed unimpeded" and that the final report will be made available to Congress and the public "immediately."

In Washington, Mueller also detailed multiple "lies" that former Trump campaign chief Paul Manafort, 69, told investigators, leading to a termination of his cooperation deal and the likelihood of a stiff prison sentence.

A heavily redacted court filing said that Manafort's "lies" included untruths about his dealings with Konstantin Kilimnik, a business associate who US officials suspect is a Russian intelligence operative, and about his contacts with Trump administration officials after striking a plea agreement.

The White House similarly dismissed that filing, arguing it "says absolutely nothing about the President."

"Once again the media is trying to create a story where there isn't one," said Sanders.