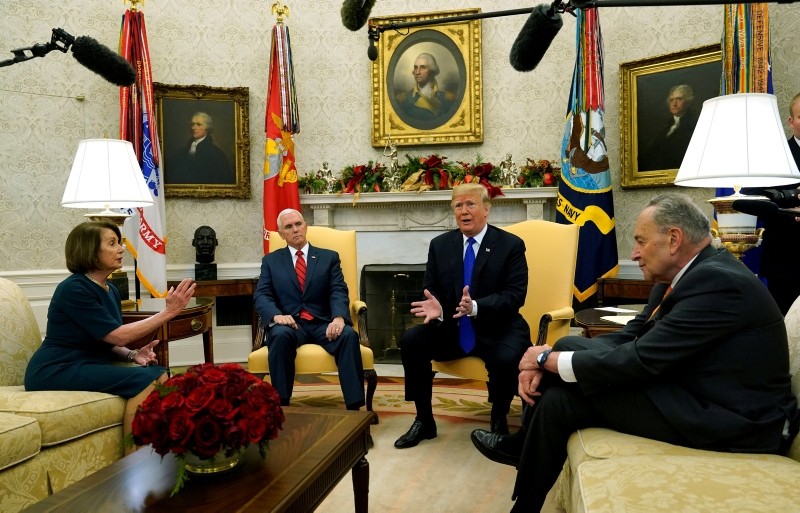 Arguing heatedly in public with Democratic leaders, President Donald Trump threatened repeatedly on Tuesday to shut down the government if Congress doesn't provide the money he says is needed to build a wall at the Mexican border. He insisted the military can build it if Democrats won't vote for the funding.

Trump's comments came as he opened a contentious meeting with Democratic Senate and House leaders Chuck Schumer and Nancy Pelosi, with the government looking at a possible partial shutdown on Dec. 21 when funding for some agencies will expire.

Schumer and Pelosi both said legislation to keep the government open and provide additional border security could pass both houses of Congress, but Trump said major wall funding was necessary.

Trump, Schumer engage in a heated debate as the US president threatens government shutdown over funding for Mexico border wallhttps://t.co/fukyOet7hy pic.twitter.com/WNhsjU4Wi9

"Yes, if we don't get what we want ... I will shut down the government," he declared.

Constantly interrupting, Trump squabbled with the Democrats over whether wall funding could be approved in the House or Senate without Democratic votes.

"This has spiraled downwards," Pelosi said.

The president asked whether Republicans had won the Senate in the November election.

"When the president brags he has won North Dakota and Indiana, he's in real trouble," retorted Schumer with a smile.

Trump also told reporters he expects to score two legislative victories before the end of the year, on criminal justice and the major agricultural and food package commonly called the "farm bill."

Speaking in the Oval Office, Trump said that it looks like Congress will soon vote on legislation on an overhaul of U.S. prison policies and criminal sentencing standards, and that he expects it will pass with bipartisan support. The farm bill, he added, will likely also receive backing from both parties when Congress votes on it, which he anticipates will happen on Friday.

Trump added that he will announce a new White House chief of staff in a week or two, and that he is interviewing many great candidates for the position.

Trump on Saturday announced current Chief of Staff John Kelly would leave at year's end. Since then, most of the people mentioned in news reports as possible replacements have said publicly they are not interested in the job. The president said he was in no rush to fill the position.