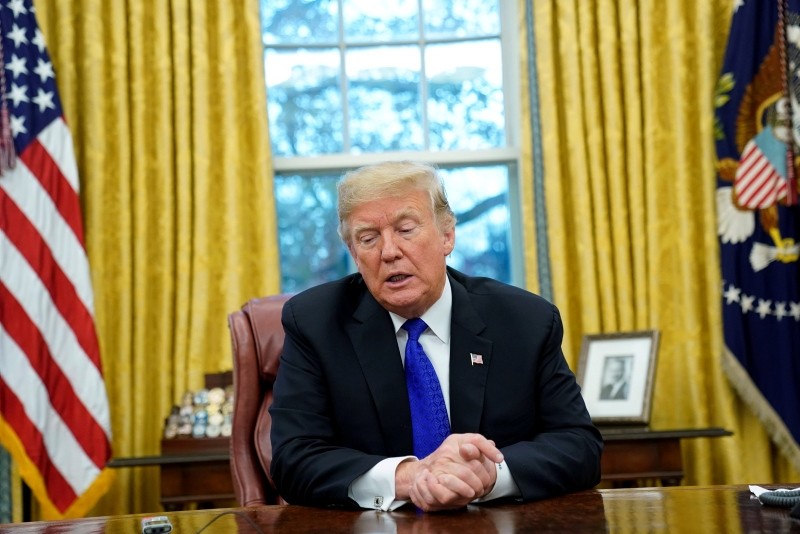 U.S. President Donald Trump sits for an exclusive interview with Reuters journalists in the Oval Office at the White House in Washington, U.S. December 11, 2018. (Reuters Photo)
by Daily Sabah with Reuters Dec 12, 2018 12:00 am

U.S. President Donald Trump reiterated on Tuesday that he stands by Saudi Arabia's Crown Prince Mohammed Bin Salman (MBS) despite a CIA assessment that he personally ordered the killing of journalist Jamal Khashoggi.

Declining to say whether Salman was complicit in the brutal murder of Khashoggi, Trump has instead emphasized the importance of the kingdom for the U.S.

"He's the leader of Saudi Arabia. They've [Saudi Arabia] been a very good ally [to us]," Trump said in an interview with Reuters in the Oval Office.

Answering a question whether standing by the kingdom meant standing by MBS, Trump responded, "Well, at this moment, it certainly does."

"I just haven't heard that. Honestly, I can't comment on it because I had not heard that at all. In fact, if anything, I've heard that he's very strongly in power," Trump said about the speculations claiming that some members of Saudi Arabia's ruling family are trying to prevent MBS from becoming king, and believe that the U.S. and Trump could play a determining role in such a scenario.

Saudi Arabia initially denied any role in Khashoggi's Oct. 2 disappearance before acknowledging he was murdered inside its Istanbul consulate.

Riyadh has sought to blame "rogue agents" for killing Khashoggi during a botched rendition operation, but the explanation has been met with skepticism by many, including a bipartisan group of U.S. lawmakers who insist the operation could not have been carried out without the knowledge of the crown prince.

As the murder raised the ire of several key U.S. lawmakers, Trump has also come under fierce criticism from fellow Republicans in the Senate over the issue, particularly after CIA Director Gina Haspel briefed them.

Accordingly, Haspel was expected to brief lawmakers from the U.S. House of Representatives yesterday about what U.S. intelligence knows about the murder of Khashoggi.

Last week, after a closed-door meeting between Haspel and leading members of the U.S. Senate, Republican Sen. Lindsey Graham said MBS was "complicit" in the killing.

"You have to be willfully blind not to come to the conclusion that this was orchestrated and organized by people under the command of MBS," Graham said following meeting.

Graham and other senators who have supported the U.S.-Saudi alliance over the years have said that Trump should impose more sanctions after a first round targeted 17 Saudis for their alleged role in the killing in the Saudi Consulate in Istanbul on Oct. 2.

As the Senate considers this week a joint resolution condemning the crown prince for the killing, something that the president would have to sign or veto if passed by Congress, Trump said he would meet with senators.

Trump said he hoped senators would not propose stopping arms sales to the Saudis, deals he has doggedly fought to save ever since the gruesome details of Khashoggi's murder were leaked by Turkey.

As amicable relations cultivated between MBS and Trump's adviser and son-in-law Jared Kushner appeared on a news program on Monday. Kushner, referring to Khashoggi case, said that U.S. intelligence is still assessing the murder of Khashoggi.

Refraining from making a clear statement, Kushner added, "We're hoping to make sure that there's justice brought where it should be."