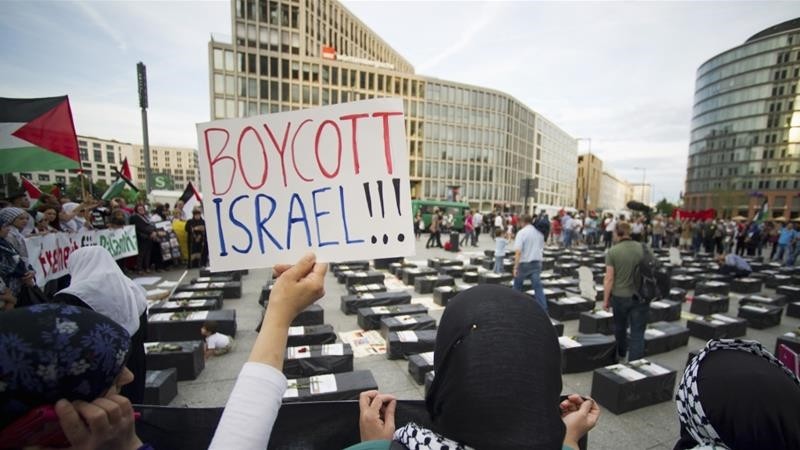 A woman holds a sign which reads ,Boycott Israel, in front of symbolic coffins while attending a demonstration supporting Palestine, in Berlin August 1, 2014. (REUTERS Photo)
by Daily Sabah with AA Dec 17, 2018 12:00 am

A woman working as a speech pathologist at an elementary school in Texas was allegedly fired for refusing to sign a loyalty oath promising not to boycott Israel, according to a lawsuit filed Monday that argues her free speech rights are being violated.

Bahia Amawi, who has worked for the Pflugerville Independent School District (PISD) since 2009 as a children's speech pathologist, said she had received an offer to renew the contract annually every year for the past nine years and each time the contract was the same.

Amawi, a U.S. citizen, was working to conduct bilingual Arabic evaluations and early childhood evaluations for Arabic-speaking students, and had been working with youth who have difficulty with language. She received her master's degree in speech pathology from Nova Southeastern University in Florida.

However, when the time came to renew her contract this August, she saw an additional clause demanding that she "does not currently boycott Israel" and "will not boycott Israel during the term of the contract."

In May 2017, the Texas legislature passed the "No Boycott of Israel" law that bars any public worker from engaging in any boycott against Israel during the tenure of their contract.

"When I saw that it was a total shock to me. I didn't understand how my position as a speech therapist helping kids with their speech and communication has to do with any economic harm with Israel. I didn't see a connection at all," Amawi said at a news conference Monday.

"I was appalled that my government was restricting me from boycotting an entity. I felt like my rights were taken away, that I had no choice in what products I purchased," she added.

After not agreeing to the section of the contract, Amawi was forced to resign from her position with the school district.

According to The Intercept online news site, she is the only certified Arabic-speaking child's speech pathologist in the district. Her termination could leave many children with speech pathologies without proper evaluation and treatment.

The lawsuit, filed by the Council on American-Islamic Relations (CAIR) Defense Fund, argues Amawi is exercising her freedom of speech by boycotting Israel, and is within her constitutional rights.

"Congress shall make no law ... abridging the freedom of speech, or of the press," the lawsuit said, citing the First Amendment to the U.S. Constitution.

CAIR called on Texas to send Amawi a new contract without the oath to not boycott Israel.