Trump Foundation agrees to dissolve amid lawsuit on misuse of funds 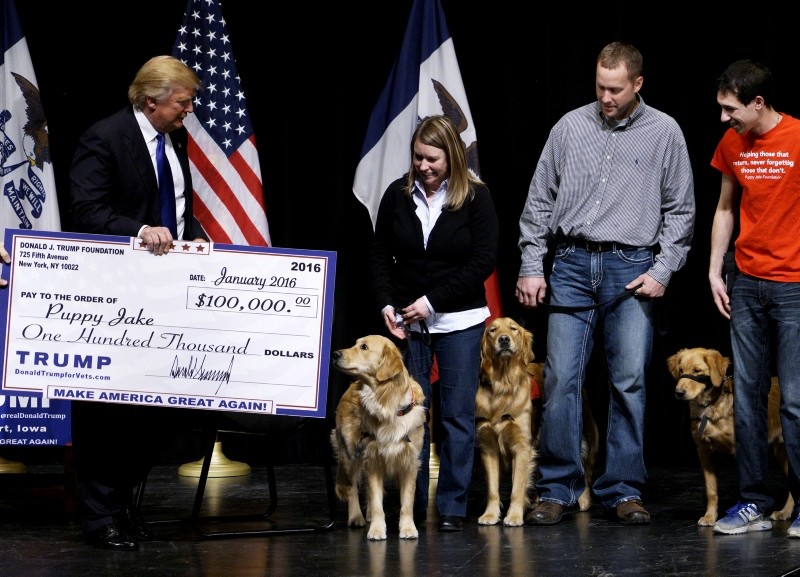 Donald Trump presents a mock check from the Trump Foundation representing $100,000 to members of the Puppy Jake Foundation, which provides military veterans with trained service dogs, in Davenport, Iowa, U.S., Jan. 30, 2016. (Reuters Photo)
by Compiled from Wire Services Dec 18, 2018 12:00 am

New York Attorney General Barbara Underwood, a Democrat, said the Donald J. Trump Foundation's assets will be distributed to charities vetted by her office. The deal is subject to approval by a New York state judge.

The White House and a lawyer for the foundation could not immediately be reached for comment. Trump, a Republican, has previously said on Twitter that Underwood's lawsuit was a concoction by "sleazy New York Democrats."

The motion had argued that the U.S. Constitution immunized Trump from Underwood's claims alleging breach of fiduciary duty, improper self-dealing, and misuse of assets belonging to the Foundation.

Underwood sued Trump and his adult children Donald Jr., Eric and Ivanka on June 14, after a 21-month probe that she said uncovered "extensive unlawful political coordination" between the foundation and Trump's campaign. The lawsuit remains pending.

A judge must still sign off on the agreement.

Underwood is a Democrat and is seeking millions of dollars in penalties. She wants Trump and his eldest children barred from running other charities.

Underwood accused the Foundation of a "shocking pattern of illegality involving the Trump Foundation -- including unlawful coordination with the Trump presidential campaign, repeated and willful self-dealing, and much more."

"This amounted to the Trump Foundation functioning as little more than a checkbook to serve Mr. Trump's business and political interests," she said in a statement.

"This is an important victory for the rule of law, making clear that there is one set of rules for everyone," Underwood added.