US says asylum-seeking migrants to wait in Mexico 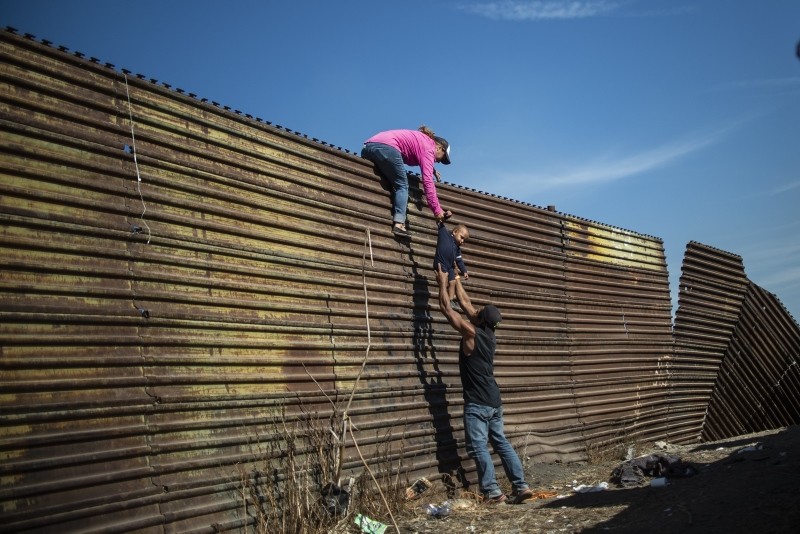 A group of Central American migrants climb the border fence between Mexico and the United States, near El Chaparral border crossing, in Tijuana, Baja California State, Mexico, on November 25, 2018. (AFP Photo)
by Associated Press Dec 20, 2018 12:00 am

Immigrants seeking asylum along the southwest border will no longer be released into the U.S. while their cases play out, the Trump administration said on Thursday, forcing them instead to wait in Mexico in one of the most significant moves on immigration since the president took office.

"They will not be able to disappear into the United States," Homeland Security Secretary Kristjen Nielsen said on Thursday in remarks before the House Judiciary Committee. "They will have to wait for approval. If they are granted asylum by a U.S. judge, they will be welcomed into America. If they are not, they will be removed to their home countries."

The new policy covers immigrants apprehended at border entry points, those who have been interviewed by U.S. immigration authorities and those who have received an immigration court date. It does not apply children traveling alone or to Mexican nationals making asylum claims.

Asylum seekers typically wait years on average before their cases are resolved, allowing them to put down roots in the U.S. while they wait. Many are fitted with electronic ankle monitors and are allowed to work while their cases progress.

Critics say the immigrants are gaming the system. Only about 9 percent of those who apply are actually granted asylum, and administration officials have long said too many migrants make false claims as a way to stay in the U.S.

Discussions between U.S. and Mexico to hammer out the arrangement began well before Mexico's new president, Manuel Lopez Obrador, took office on Dec. 1. On Thursday, the Mexican foreign ministry said Mexico had agreed to the policy on a temporary basis for humanitarian reasons.

Many details have not been worked out or disclosed. U.S. officials said the changes will be rolled out gradually across the border. Mexican officials will allow the waiting migrants to work and travel.

Homeland Security officials said the Mexican government will allow asylum seekers access to U.S. immigration lawyers, but it was unclear where attorneys and their clients would meet.

Some parts of northern Mexico, particularly across the Rio Grande from Texas, are considered very dangerous due to violence and drug trafficking. The U.S. State Department has warned American citizens not to travel to the Mexican state of Tamaulipas, which borders the Texas cities of McAllen and Brownsville.

Forcing thousands of asylum seekers to remain in Mexico possibly for years will put many of them in life-threatening danger, said Jennifer Harbury, a South Texas attorney and human rights advocate.

"Giving them food or work authorization does not protect them from the cartels or the war zone that they would be sent to," she said. "If Mexico could protect them, they would be protecting their own citizens, and they can't."

Immigrant advocates decried the administration's decision, saying keeping asylum seekers in Mexico while they seek safe haven in the United States is illegal.

"This deal is a stark violation of international law, flies in the face of US laws passed by Congress and is a callous response to the families and individuals running for their lives," Margaret Huang, executive director of Amnesty International, said in a statement.

Advocates said Mexico is especially dangerous for LGBT immigrants, and traffickers and kidnappers threaten the well-being of women and children seeking protection in the United States.

More than 100,000 immigrants were caught crossing the U.S.-Mexico border in October and November. Nearly half of them were traveling in family groups that included children, according to statistics from U.S. Customs and Border Protection.

While the number of immigrants caught crossing the border illegally has fallen since the 1990s and early 2000s, U.S. authorities have been grappling in recent years with an increase in children traveling alone or with family.

It is not illegal to cross the border without a visa to apply for asylum. Immigrant advocates say violence in the Central American countries of El Salvador, Guatemala and Honduras is driving people north, and many are coming to seek asylum. Nearly 100,000 immigrants requested initial asylum screenings during the fiscal year ending in September, according to U.S. Citizenship and Immigration Services.

Thousands of migrants have come up from Central America in recent weeks as part of caravans. President Donald Trump used his national security powers to put in place regulations that denied asylum to anyone they say crossed the border illegally, but a judge has halted that change as a lawsuit progresses.

Nielsen said in a statement the policy would be done legally.

"This will also allow us to focus more attention on those who are actually fleeing persecution," she said.

The agreement comes two days after the US pledged $10.6 billion for Central America and southern Mexico to promote development so that people did not have to leave their countries.

Experts in Mexico doubted whether Lopez Obrador would face any significant backlash against the decision, which they noted was announced when much of the country had its mind on Christmas shopping and holiday planning.

"These are not humiliating concessions, they're quite reasonable," said Federico Estevez, a political science professor at the Autonomous Technological Institute of Mexico. Lopez Obrador may absorb a cost, but it's relatively small price to get your neck out of the noose on the immigration issue."