'Go back to where you came from': Texas man goes on racist tirade against Arabs, Democrats at Macy's 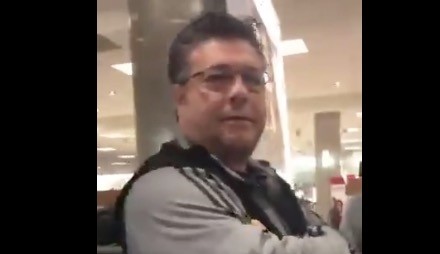 A Texan man's racist, profanity-laced tirade against a woman for speaking Arabic at a Macy's store in Dallas was captured on video Tuesday.

Shared by Twitter user @rickyy_____ , the now-viral video shows the man shouting at a woman, telling her to go back to where she came from and "not speak Arabic" at Macy's over the holidays.

"Go back to where you came from": Racist man harasses Macy's employee for speaking Arabic, rants at Democrats after being confronted by other customers in Dallas, Texashttps://t.co/ZbBU58Bj3e pic.twitter.com/Vku4MIOHJ7

Several customers are seen defending the woman, confronting the unidentified man over his racist and insulting attacks.

"All you Arabs and Democrats, just go back where you came from," he laments after being asked by other customers to leave the store.

"Well, she's making a big stand, why don't I?" the man fires back at his confronters, throwing his hands up into the air.

"I cannot see how many Arabs came out of the woodwork," the angry man complains, cursing at the teenager filming the video after he calls him a "snowflake".

The man is then seen making a rude gesture to the camera, continuing his profanity-laced rant as he walks away.