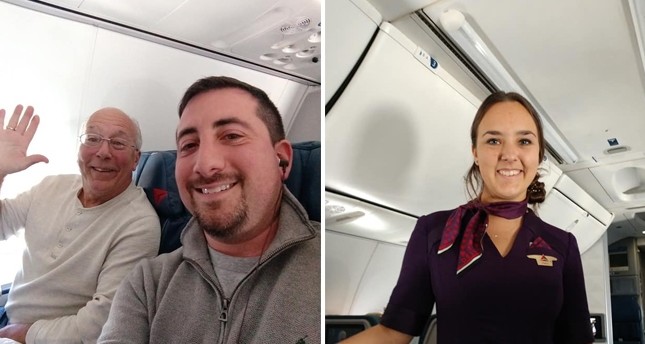 An American man bought six flight tickets to spend the Christmas holiday with his flight attendant daughter who had to work during the holiday.

Hal Vaughen booked multiple flights between Dec. 24 and 25 and spent the days onboard flights in order to be with his daughter Pierce, who was assigned to work on Christmas holiday.

The loving gesture went viral on social media after a passenger who sat next to Vaughen in one of his flights shared the incident.

"I had the pleasure of sitting next to Hal on my flight back home. His daughter Pierce was our flight attendant who had to work over Christmas. Hal decided he would spend the holiday with her. So, he is flying on each of her flights today and tomorrow around the country to spend time with his daughter for Christmas. What a fantastic father! Wish you both a very Merry Christmas!" Mike Levy wrote on his Facebook account, which was shared tens of thousands of times.

Later, the daughter shared Levy's post and made further explanations about her dad's trips.

She said that her father used his family benefits on the airline she works, and added that her father "Made it onto all of my [her] flights, even riding first class on one of them - from Florida to Michigan" which she called a "Christmas miracle."

It was Vaughan's first trip since an accident left him quadriplegic for a period of time, Levy told the CNN.

Other users commented on Levy's post by saying how loving a father Vaughen was and how lucky his daughter is for having him.