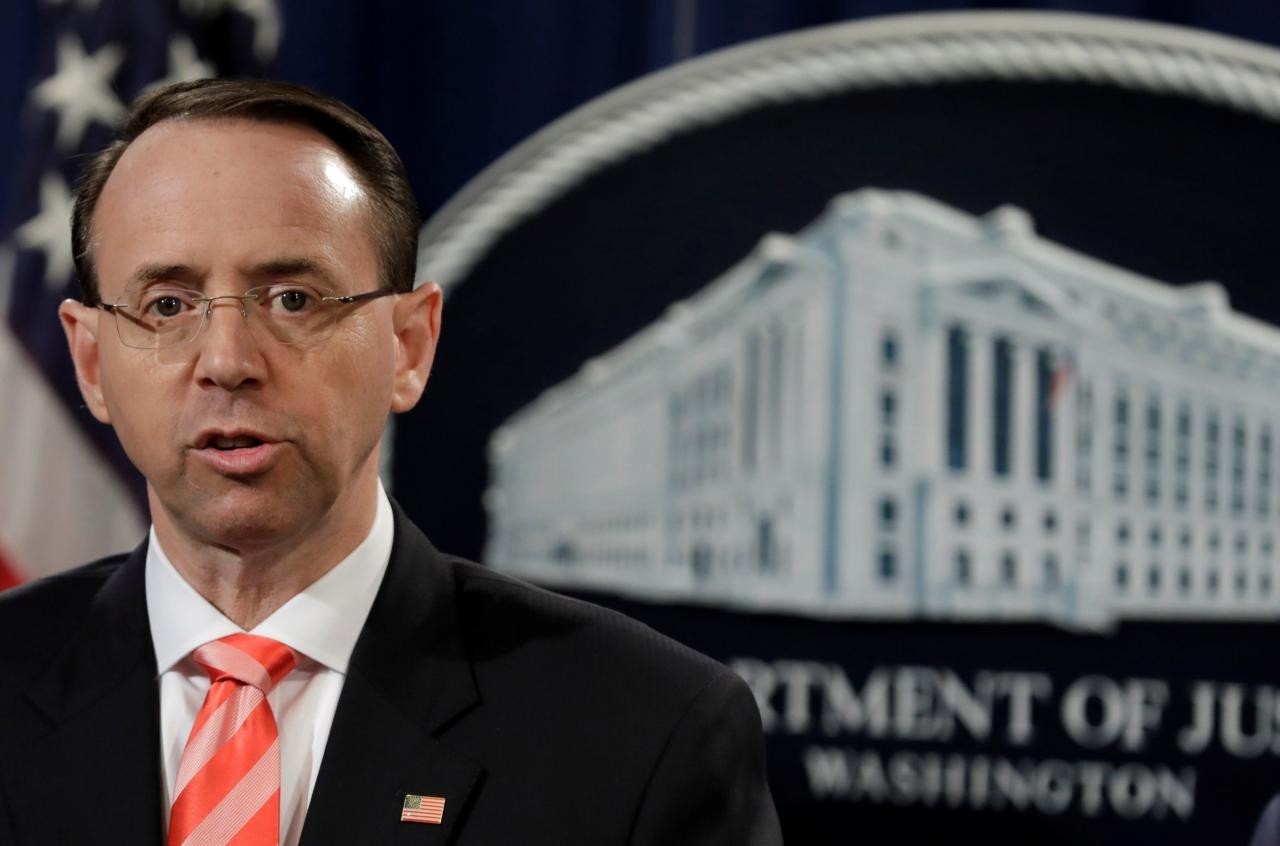 | Reuters Photo
by Associated Press Jan 25, 2019 11:52 am
Deputy Attorney General Rod Rosenstein, who appointed special counsel Robert Mueller and remains his most visible Justice Department protector, is expected to leave his position soon after William Barr is confirmed as attorney general, a person familiar with the plans said Wednesday.

Barr, who served in the position in the early 1990s and is President Donald Trump's pick to do the job again, has a confirmation hearing before the Senate Judiciary Committee next week and could be in place at the Justice Department as soon as February.

Rosenstein plans to leave at some point after that, though no date has been set and there is no formal plan for the departure, according to the person, who was not authorized to discuss internal conversations publicly and spoke on the condition of anonymity. Rosenstein, a former United States attorney in Maryland, will have served as deputy for roughly two years by the time he leaves.

There is no indication that Rosenstein was forced out. It is common for new attorneys general to select their own deputies and Barr has told people close to him that he wanted his own No. 2.

Still, Rosenstein's departure is noteworthy given his high-profile role overseeing the Mueller probe and the tenuous relationship he had with Trump, who has repeatedly decried Rosenstein's decision to appoint the special counsel.

In September, Rosenstein went to the White House expecting to be fired after news reports surfaced that he had discussed secretly recording Trump and invoking a constitutional amendment to remove Trump as unfit for office. He was ultimately allowed to stay on after private conversations with Trump and John Kelly, then chief of staff.

Trump also shared a photo on Twitter in November showing Rosenstein and others criticized by the president behind bars, calling for them to be tried for "treason."

Mueller is investigating Russia's meddling in the 2016 election and contacts with the Trump campaign. Rosenstein and his chief deputy have continued to maintain day-to-day oversight over the probe, a senior Justice Department official told reporters last month.

The White House cast Rosenstein's departure as his choice. Spokeswoman Sarah Huckabee Sanders said Wednesday Rosenstein had always planned to stay around two years and wants to help with the transition to a new attorney general.

"I don't think there's any willingness by the president or the White House to push him out," Sanders told Fox News. "My guess is he is making room for the new attorney general to build a team that he wants around him."

Rosenstein appointed Mueller as special counsel in May 2017 to investigate potential coordination between Russia and the Trump campaign to sway the 2016 election. The appointment followed the recusal of Sessions because of his work on the Trump campaign and Trump's firing of former FBI director James Comey .

The transition to Barr would come with critical steps in the Mueller investigation expected to unfold in the weeks and months ahead, when the special counsel's office is expected to report its findings to the Justice Department.

At a news conference in December, Rosenstein said that Mueller's investigation would be "handled appropriately" no matter who is overseeing it. He said Barr would be an "excellent attorney general when he is confirmed."