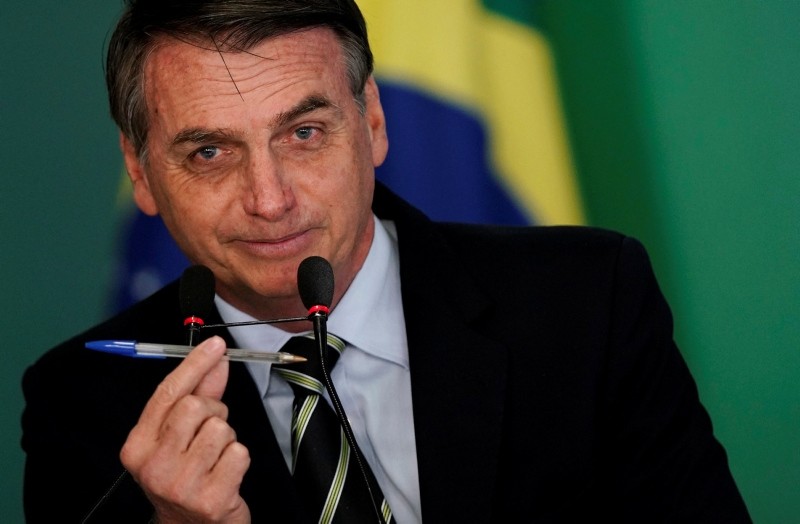 Brazil's President Jair Bolsonaro shows a pen during a signing ceremony of the decree which eases gun restrictions in Brazil, at the Planalto Palace in Brasilia, Brazil January 15, 2019. (Reuters Photo)
by Associated Press Jan 25, 2019 11:52 am

Brazil's President Jair Bolsonaro on Tuesday signed a decree making it easier for many Brazilians to own firearms, the first of many expected changes by the nascent administration to overhaul gun laws in the nation that leads the world in total homicides.

Bolsonaro signed the decree in a televised ceremony in the capital of Brasilia, arguing that it and other changes expected to be pushed in Congress would help people defend themselves. The former army captain and far-right leader said his electoral win last year was a sign that citizens in Latin America's largest nation wanted to arm themselves.

"The people decided in favor of buying guns and ammunition and we can't deny what the people want at this moment," said Bolsonaro, who during the campaign often made pistol gestures to supporters with his fingers.

The decree established a wide range of categories of who qualifies for gun ownership, and government officials said it was crafted to cover just about any citizen wanting a firearm.

The categories include citizens living in rural areas, in urban areas with high levels of homicide, business owners, gun collectors and hunters. Prospective gun owners must still meet other requirements, such as not having a criminal record, taking a psychological exam, a course at a gun club and being at least 25 years old.

Before the decree, the law stipulated that civilians who wanted to own a gun had to justify their interest. Bolsonaro and other proponents of relaxing legislation argued that such a requirement was arbitrary — such reviews happened with a federal police official — and meant that in practice many would-be owners were denied.

The decree also extended from five to 10 years the period to renew the registration of each firearm. In one area that could be interpreted as tightening the law, it required gun owners have a safe with a key in any home with children, adolescents or a person with a mental disability.

While the decree allows more people to buy weapons, it remains illegal for most civilians to carry them in public. Bolsonaro and the so-called "Bullet Caucus" in Congress plan a legislative push to overturn that.

Security experts have long argued that more guns will lead to increased violence.

"If the Brazilian government is sincere about improving public security and fighting organized crime, it will enforce existing gun laws rather than dismantling them," said Igarape, a Brazilian think tank, in a statement. "Specifically, it should strengthen national data gathering on seized firearms to disrupt trafficking. It must improve oversight over the arms holdings of police and private security companies."

For decades, Brazil has been the world leader in annual homicides. Last year, nearly 64,000 were killed, the majority by firearms.

Despite tight gun laws, arms are widely available. Drug traffickers in slums are commonly seen brandishing automatic weapons. Many guns possessed illegally begin as legal, and were then stolen from police or military personnel or sold by corrupt people in those institutions.

Several studies, both in the United States and Brazil, have found a correlation between increased guns and homicide and suicide rates. However, some social scientists, and gun proponents, argue such data is inconclusive.

Bolsonaro and others in his administration have argued that allowing more Brazilians to carry guns would help combat criminality, one of his key campaign promises.

"Any criminal in any part of the world fears an armed citizen," said chief of staff Onyx Lorenzoni minutes after the decree was signed.

"England saw its home assaults increased by 40 percent since guns were banned there," he added, without providing more details.

But polls have consistently shown most Brazilians want tighter restrictions on guns.

A Datafolha poll published at the end of last year found that 61 percent believed firearms should be prohibited and posed a threat to others. The poll interviewed 2,077 people Dec. 18-19 and a had a 2 percentage point margin of error.