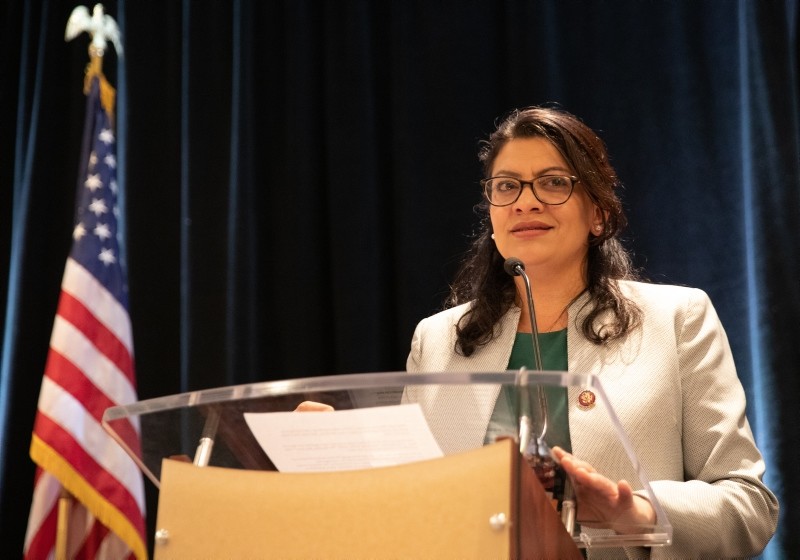 A Florida official came under fire after comparing Michigan Rep. Rashida Tlaib to a suicide bomber who might blow up the Capitol Hill.

"A Hamas-loving anti-Semite has NO place in government! She is a danger and [I] would not put it past her to become a martyr and blow up Capitol Hill," Anabelle Lima-Taub, a commissioner in Hallandale Beach, said in a Facebook post.

"This sort of hateful anti-Muslim rhetoric doesn't happen in a vacuum — this President embraced it and Republicans have happily gone along with it," she wrote.

Five days after Tlaib made national headlines for a vow to help fellow Democrats "impeach the mother******," a reference to U.S. President Donald Trump, Lima-Taub signed an online petition to remove Tlaib from office. She then shared it on Facebook along with racially charged comments first reported by the South Florida Sun-Sentinel.

Lima-Taub told the Miami Herald her support for removing Tlaib from office had little to do with the possible offense Tlaib caused Trump and his supporters. She also ignored critics who called for an immediate apology for the offensive post and instead justified her actions by pointing to Tlaib's stance on Israel.

"My issue with Congresswoman Rashida Tlaib is her affiliation with the BDS movement, Hamas, Hezbollah and CAIR [the Council on American-Islamic Relations]," Lima-Taub told the Herald. BDS refers to the Boycott, Divestment and Sanctions movement against Israel. CAIR-Florida called for Lima-Taub's immediate resignation after learning of the post.

"To say someone might be a terrorist because they are Muslim is wrong," said Hallandale Beach Commissioner Mike Butler. He said members of all faiths are welcome in the South Florida City.

But Tlaib says it's about more than just her faith.

"For me, this is about the First Amendment and protecting our right to freedom of speech," Tlaib said.

Tlaib is one of a few outspoken supporters of BDS in Congress. The BDS movement was started more than a decade ago by Palestinians inside the occupied territories and calls for international allies of Israel to boycott certain Israeli institutions in order to put pressure on Israel to adhere to international standards and U.N. resolutions.

The movement, which is largely decentralized, does not take a stance on what a particular solution would look like, regarding one state or two, according to the official BDS website. And while various organizations across the Middle East have voiced support for the movement, there is little evidence that links BDS supporters directly to Hamas and Hezbollah, both U.S.-designated terrorist organizations.

Lima-Taub pointed to a photo that circulated on Twitter last week, which appears to show Tlaib's congressional office featuring a map of the Middle East with a Post-It note over the state of Israel that reads "Palestine," and called it "a slap to the face of all Jews."

Tlaib's "subscription to the annihilation of Israel and one-state solution eliminating Israel and involving only Palestine, you can see where I was coming from," Lima-Taub said, doubling down on her Facebook comment. There is no evidence that Tlaib put the Post-It there on the map herself.

"It's very clear that there's obviously an agenda on the right to make this more than it is," Tlaib said. "I am supporting Senator [Bernie] Sanders and the American Civil Liberties Union [ACLU] and others that also support the same position I do, which is freedom of speech is extremely important in our country and we need to value it and support it."

Rubio-led legislation that would allow local governments to counter-boycott businesses that boycott Israel.

"I believe by definition BDS is anti-Semitic," Rubio told the Herald on Tuesday. "I believe anti-Israel policies are the 21st-century version of anti-Semitism disguised as foreign policy and economic warfare. It is, in essence, an effort to destroy the economy of the Jewish state."

Rubio, who traded barbs on social media with Tlaib last week, said he did not support Lima-Taub's comments about Tlaib bombing the Capitol.

"I don't believe supporting BDS means you support bombing anything," Rubio said. "I don't know who this commissioner was or why they said it. I don't have to agree with that statement to believe that what she (Tlaib) tweeted last week was a phraseology often used in conjunction with anti-Semitism, the notion of dual loyalties and the like."

Rubio's bill, the Strengthening America's Security in the Middle East Act, failed when 43 Democrats voted against it. He plans to keep pushing the proposal, arguing that some Democrats didn't support it because the bill wouldn't end the ongoing government shutdown.

In Florida, Lima-Taub is in the hot seat for her comments.

Hallandale Commissioner Michele Lazarow called the statement a "black eye for Hallandale Beach," and demanded an apology. Lazarow, like much of the Hallandale Beach community, is also Jewish and has her own critiques of Tlaib's positions on Israel, said that does not justify Lima-Taub's comments.

"Though I have major issues with some of Congresswoman Tlaib's political views, those issues are resolved through elections and debate, not by promoting a racist stereotype that all Muslims are terrorists," Lazarow wrote in a statement.

"That level of racism and bigotry has no place in Florida Politics," Emerge Florida State Director Vetnah Monessar wrote. "Muslims are part of the fabric of this country. We demand that Commissioner Taub apologizes to her constituents and the general public."

The Council on American-Islamic Relations (CAIR) called for Lima-Taub's resignation.

"CAIR-Florida strongly condemns the disgraceful racist and Islamophobic statements published by Commissioner Annabelle Lima-Taub," Wilfredo Ruiz, communications director for the CAIR in Florida, said in a statement. "Her un-American, xenophobic statements establish that she is unfit to hold the Commissioner's seat."

The Facebook post and petition were removed from Lima-Taub's Facebook after reporters began asking questions, according to the Sun Sentinel. However, other posts remain public in which the Hallandale Commissioner calls Tlaib a "worthless woman" and "abhorrent" politician.