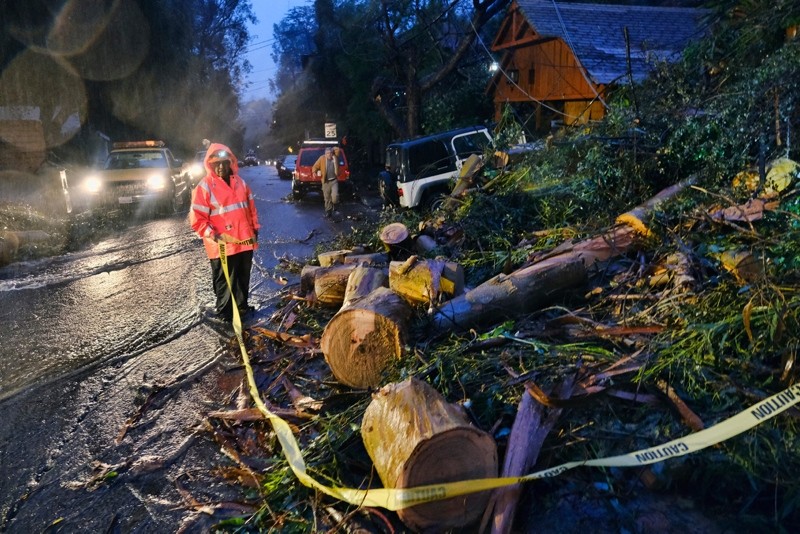 Department of Water and Power employees work in the pouring rain to clear a fallen tree from a road in the Hollywood hills in Los Angeles, Thursday, Jan. 17, 2019 (AP Photo)
by Associated Press Jan 25, 2019 11:52 am

Heavy rain, snow and wind pummeled much of California Thursday, causing at least five deaths, leaving thousands without power and forcing wildfire victims threatened by floods to flee their homes.

In harder hit Northern California, authorities warned of imminent floods and debris flows in the wildfire-ravished city of Paradise and the surrounding region denuded of protective trees and vegetation, telling residents to prepare to flee their homes on a moment's notice.

"Flash flooding is a dangerous and life threating situation," the Butte County sheriff's department said. "Due to the dynamic nature of debris flow and flash flood events, residents should not wait for an evacuation order to take action."

The California Highway Patrol reported that four people were killed in two separate Northern California auto accidents caused by rain-slickened roads this week, including a family of three killed Tuesday in the Sierra Nevada foothill town of Placerville.

The CHP says high winds knocked over a large tree that fell into a homeless encampment Wednesday afternoon, killing a 42-year-old man. The CHP said the victim may have been trying to shelter under some trees near an Oakland freeway when he was crushed by a 30-foot-long (9-meter) branch.

The man may have been "just trying to stay dry," CHP officer Herman Baza said. "Unfortunately, that protection was deadly."

More than 140 flights were canceled at San Francisco International Airport and the CHP warned of treacherous road conditions throughout the state.

Meanwhile, blizzard conditions blanketed the higher elevations of the Sierra Nevada and the region's ski resorts with as much as four feet of snow just in time for the three-day Martin Luther King Jr. holiday weekend.

So much snow accumulated on the tail of an executive jet parked at the Tahoe Truckee Airport that it propped its nose in the air Wednesday morning.

Tens of thousands of people were without electricity in Pacific Gas & Electric utility areas, including more than 15,000 in San Jose late Wednesday night.

The weather service issued a high surf warning for San Francisco County through Friday, with 30-foot (9-meter) breakers along the coast of the North Bay, Monterey Bay and Big Sur.

San Francisco saw only an inch (2.5 centimeters) of rain but Venado in Sonoma County got 5 inches (13 centimeters) over 24 hours.

Rain and winds forced the cancellation of more than 140 flights at San Francisco International Airport.

In Southern California, fog on a mountain highway triggered a 19-vehicle crash. Thirty-five people were evaluated for injuries after the pileup on Interstate 15 in Cajon Pass, but most declined to be taken to hospitals, the San Bernardino County Fire Department said.

In areas recently scarred by wildfires, authorities feared small rivers and creeks would flood their banks and cause massive mudslides, further damaging communities struggling to recover from a historically bad fire season.

The blazes stripped hillsides of trees and other vegetation that stabilize soil and prevent mudslides, putting at risk thousands of people living in foothill and canyon areas devastated by wildfires.

The hillsides were holding but people in burn areas were urged to remain alert.