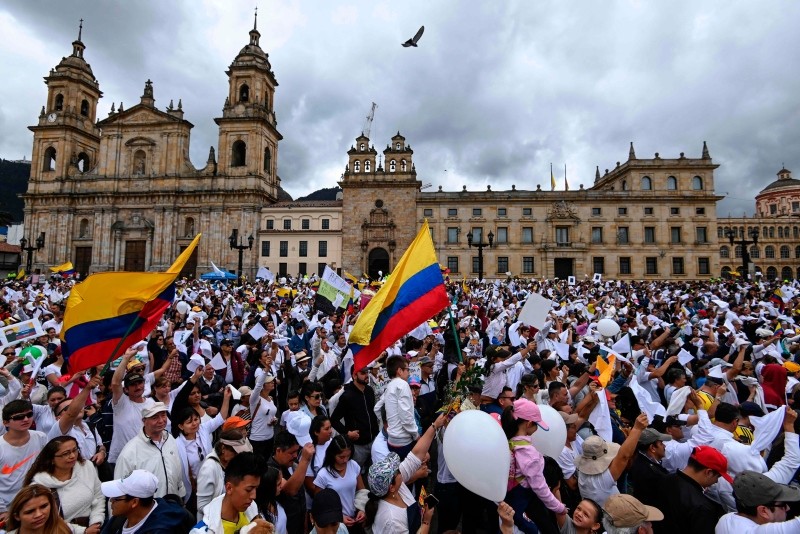 Colombians gather at Bolivar square in Bogota to demonstrate against terrorism, in repudiation of the police academy recent car bombing that left 20 people dead, and in support of the victims and their relatives, on January 20, 2019. (AFP Photo)
by Daily Sabah with Wires Jan 25, 2019 11:52 am

Colombians took to the streets for nation-wide protests for peace after a deadly terrorist attack by ELN rebels, which is seen as a major setback to two years of peace talks

White flags and balloons filled the streets in the capital city of Bogota as thousands of Colombians marched Sunday to express outrage at violence after a terrorist attack that derailed peace talks.

In last Thursday's attack, the deadliest in 16 years, a gray Nissan Patrol SUV carrying about 80 kilograms of highly explosive pentolite, broke through checkpoints and onto the grounds of the General Santander School in the capital before it detonated, also damaging hundreds of apartments nearby.

Colombia's leftist National Liberation Army (ELN) rebels claimed responsibility yesterday for the terrorist attack. The group said that Thursday's car bombing was a reprisal attack after the government of President Duque failed to respect a unilateral cease-fire declared by the rebels over Christmas.

"The operation carried out against these installations and troops is lawful within the law of war, there were no non-combatant victims," the ELN said in a statement on its website.

It added the academy was a military installation where cadets received training to become intelligence operatives and conduct military operations. "The president did not respect the gesture of peace" and "his response was to carry out military attacks against us," it said.

Specifically, the ELN said Colombian troops bombed a camp on Dec. 25, affecting a family of peasants who were nearby. "It is then very disproportionate that, while the government is attacking us, we cannot respond in self-defense," the statement added.

The attack was a major setback to two years of peace talks with the ELN, first hosted by Ecuador and currently by Cuba, which failed to go beyond the exploratory stage before stalling when Duque took power in August 2018.

Composed of some 2,000 fighters and considered a terrorist organization by the U.S. and EU, the ELN began peace talks with the government of former President Juan Manuel Santos in early 2017, but they were suspended by Duque until the group frees its hostages and stops attacks.

The latest incident was the deadliest car bomb attack since the Revolutionary Armed Forces of Colombia (FARC) attacked Bogota's upmarket El Nogal social club in 2003, killing 36. Car bombs were frequently used during decades of civil war but the worst of the violence, which killed some 260,000, ended in 2016 when peace was signed with FARC.