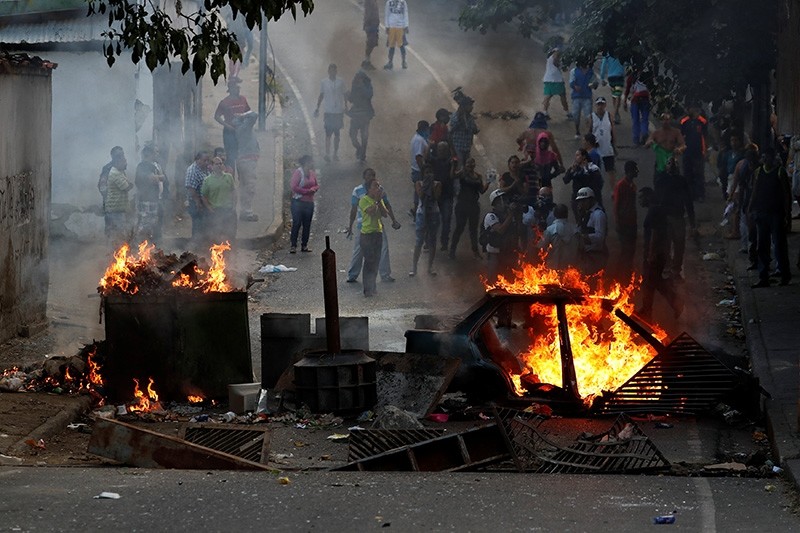 Demonstrators stand behind a burning barricade during a protest close to a National Guard outpost in Caracas, Venezuela, Jan. 21, 2019. (Reuters Photo)
by Daily Sabah with Agencies Jan 21, 2019 10:53 pm

The Venezuelan army on Monday detained 27 members of the National Guard who stole weapons and abducted four officers, officials said.

"A small group of soldiers were arrested who betrayed their oath of allegiance to the homeland," said a statement published on Twitter accounts of Television of Venezuela and the Ministry of Popular Power for Defense.

The military said at around 2:50 a.m. (06:50 GMT), a small group of guardsmen took captive a captain in charge of a police station in western Caracas and then moved across the capital in two military trucks to the poor neighborhood of Petare, where they stole a cache of weapons from another outpost.

The attackers were captured a few hours later in the Caracas neighborhood Cotiza, an impoverished neighborhood 3 kilometers (1.8 miles) from the Miraflores presidential palace. The ministry vowed that they would face "the full weight of the law."

The ministry attributed the attack to "the extreme right."

There has been concern about a possible mutiny in the army after President Nicolas Maduro was sworn in for a second term on Jan. 10.

The defense ministry announced the capture of the national guardsmen shortly after a man in military fatigues appeared in a video, calling on the population to protest on the streets.

"Here we are to fight for you, the people of Venezuela," said the man, who identified himself as Sergeant Figueroa.

"With absolute respect for human rights ... but with the strength and firmness ... our Bolivarian National Armed Forces respond to attacks against the Fatherland ... wherever they come from," tweeted Diosdado Cabello, president of the pro-government Constituent Assembly.

But Juan Guaido, president of the opposition-dominated National Assembly, said: "Our soldiers know that that the command chain has been broken by the usurpation of the presidency."

The National Assembly will "provide all the necessary guarantees to (army) members who contribute actively to the re-establishment of the constitution," he tweeted.

The army command has so far appeared to support Maduro, despite minor attempts at rebellion within the security forces.

Many countries, including South American neighbors and the United States, have pressured Maduro to resign amid the country's massive economic and political crisis.

Maduro was the target of an apparent assassination attempt Aug. 4 when two drones armed with explosives detonated near him as he spoke at a military parade.

In June 2017, rogue police officer Oscar Perez stole a helicopter and flew it over the capital, launching grenades at the Supreme Court building. He and several comrades died in a gunbattle with police after months on the lam.