Maduro breaks diplomatic relations with US, gives 72 hours for personnel to leave 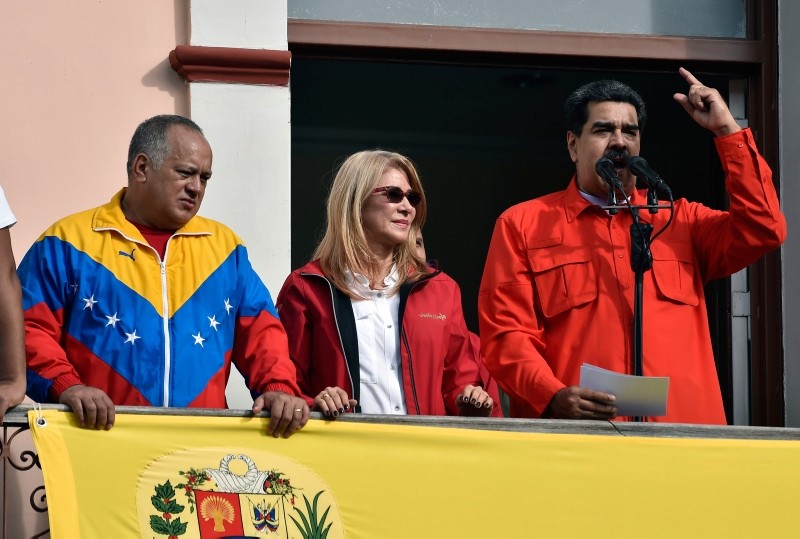 Venezuela's President Nicolas Maduro (R), speaks to a crowd of supporters flanked by his wife Cilia Flores (C) and the head of Venezuela's Constituent Assembly Diosdado Cabello, during a gathering in Caracas on January 23, 2019. (AFP Photo)
by Jan 24, 2019 12:32 am

"I've decided to break diplomatic and political relations with the imperialist government of the United States," said Maduro to thousands of supporters in Caracas.

"Get out! Leave Venezuela, here there's dignity, damn it," he said, giving the U.S. delegation 72 hours to quit the country.

Guaido, the head of the opposition-controlled legislature, caused a sensation on Wednesday when he told a crowd of tens of thousands of opposition supporters that he was declaring himself "acting president."

Trump was the first foreign leader to react and threw his backing behind Guaido, describing the National Assembly as "the only legitimate branch of government duly elected by the Venezuelan people."

Speaking from a balcony at the presidential palace in Caracas, Maduro accused the U.S. government of "attempting a coup d'etat."

"Trying to impose a government by extra-constitutional means, we cannot accept that."

He called on Venezuela's state agencies to "close ranks" in favor of "democracy" and repeated his call for loyalty from the armed forces.

"To my command, maximum loyalty, maximum unity, maximum discipline so that we win this battle together!" said Maduro.

Meanwhile, the U.S. rejected Maduro's move to sever diplomatic ties saying he did not have the authority to do so.

Pompeo, however, suggested that U.S. diplomats planned to stay put and he demanded the Venezuelan military and security forces "continue protecting ... all Venezuelan citizens, as well as U.S. and other foreign citizens in Venezuela.

"We call on all parties to refrain from measures that are inconsistent with the privileges and immunities enjoyed by members of the diplomatic community," he said.

"The United States will take appropriate actions to hold accountable anyone who endangers the safety and security of our mission and its personnel," he added.