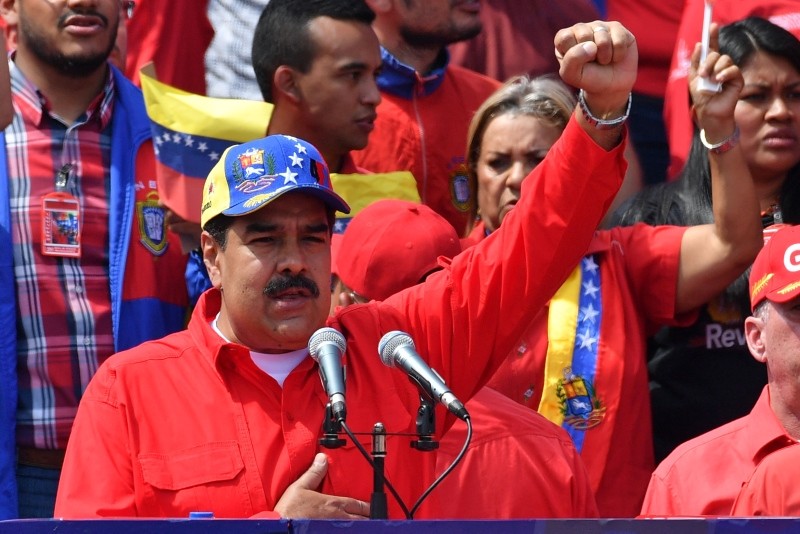 Venezuelan President Nicolas Maduro proposed on Saturday bringing forward parliamentary elections to this year, as he seeks to crush the threat posed by the National Assembly's head, Juan Guaido, who has proclaimed himself legitimate head-of-state.

Maduro in a speech to supporters Saturday said it would be up to the pro-government constitutional assembly to decide whether or not to back his proposal.

But speaking at a rival pro-regime rally celebrating the 20th anniversary of the socialist revolution led by his predecessor Hugo Chavez, Maduro said he was in favor of a Constituent Assembly proposal to bring forward to this year parliamentary elections set for the end of 2020.

"I agree and I will hold to this decision," said Maduro, who was making his first public appearance in six months.

"They (the opposition) want to bring forward elections, let's have elections," he said defiantly.

Elections for the opposition-controlled National Assembly aren't supposed to take place again until 2020.

When new parliamentary elections are held, the opposition could lose its majority.

Guaido called fresh protests on Saturday to demand Maduro to cede power after a week of sporadic mass protests. The last round of demonstrations took place Wednesday.

The U.S., Canada and most Latin American countries have recognized Guaido, the National Assembly president, as the legitimate leader of Venezuela, but Maduro has so far refused calls to step down.

He has accused the U.S. of orchestrating a coup against his government but said he is open to dialogue with the opposition, but not new national elections.

Russia and China both opposed the U.S. call to support Guaido, and condemned any international interference in the affairs of Venezuela. Turkey and Iran have also put their weight behind Maduro.

The U.S. has led an international campaign to apply economic and diplomatic pressure on Maduro, including sanctioning the country's state-owned oil company and a joint venture with its Nicaraguan counterpart. It has warned of grave repercussions if Guaido is harmed.