Venezuelans rally for and against embattled Maduro on revolution anniversary 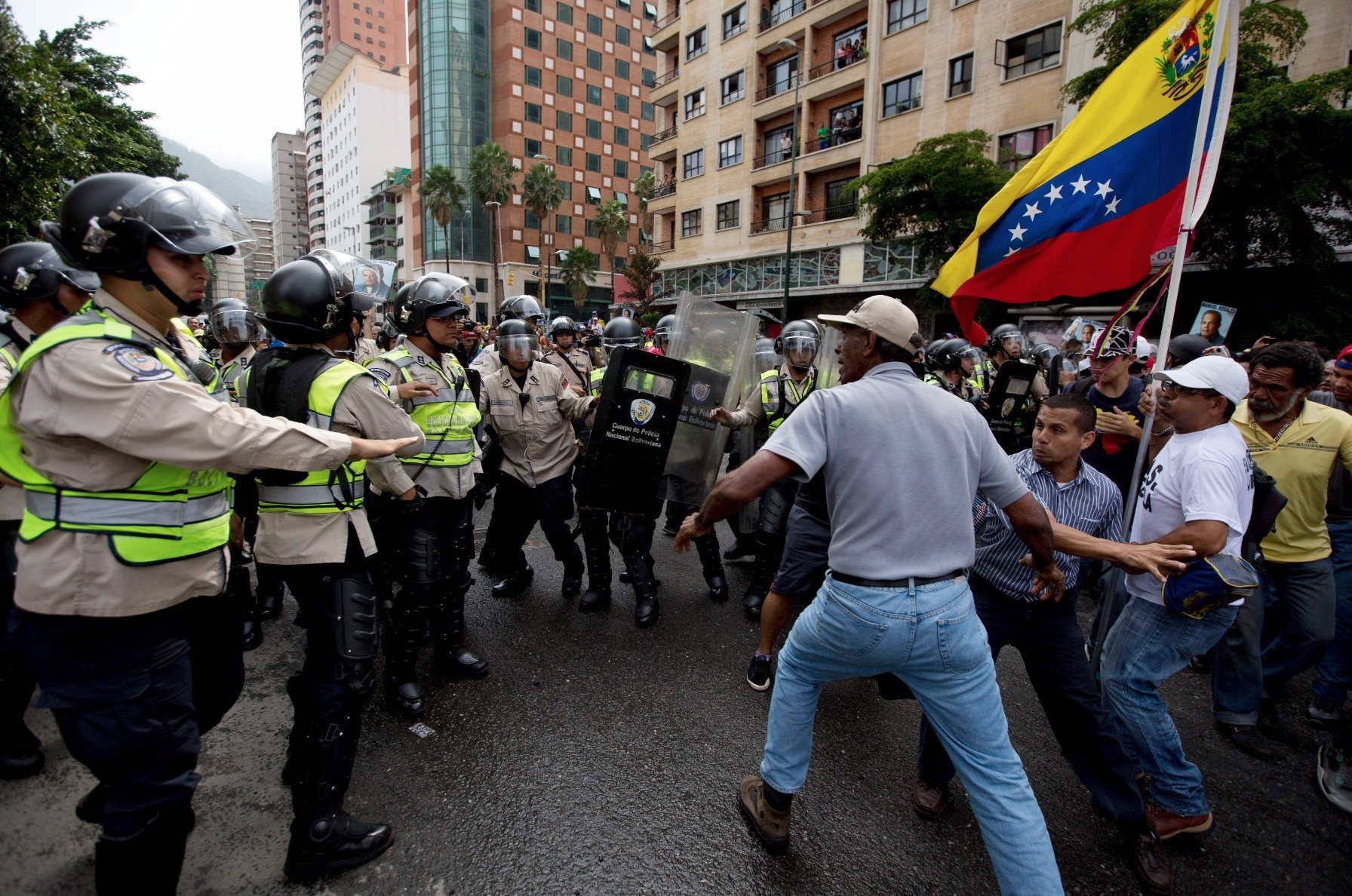 Anti-government demonstrators try to break through a police barrier in an effort to reach the headquarters of the national electoral body in Caracas, May 18, 2019.
by Daily Sabah with Wires Feb 04, 2019 12:07 am

Buoyed by the defection of top generals, Venezuelan opposition leader Juan Guaido predicted Saturday the month of February would be "decisive" in determining the future of the nation as he and socialist leader Nicolas Maduro held competing mass rallies in the capital

National Assembly head Juan Guaido, 35, called for Saturday's protest to ramp up the pressure on President Nicolas Maduro to step down, 10 days after stunning the world by declaring himself the "interim president" of the oil-rich, crisis-wracked country.

He received a boost before it began when an air force general became the highest ranking officer to abandon Maduro and recognize Guaido as the country's true leader.

U.S. National Security Advisor John Bolton responded to that in a tweet calling on "all military members to follow General [Francisco] Yanez's lead."

Military intervention in Venezuela by the United States is not imminent, U.S. President Donald Trump's National Security Adviser John Bolton said on Friday, but reiterated that all options remain on the table. Bolton responded to the Hugh Hewitt radio show with a categorical: "No."

"The president said all options are on the table, but our objective is a peaceful transfer of power," he said.

Trump himself reiterated these words later yesterday, saying: "Certainly it's something that's on the - it's an option," Trump said in an interview broadcast on Sunday on the CBS "Face the Nation" program. "Well he has requested a meeting and I've turned it down because we're very far along in the process."

The United States recognized Guaido as Venezuela's interim president on Jan. 23, while four major European nations – Britain, France, Germany and Spain – said they will do likewise unless Maduro calls for presidential elections by midnight on Sunday. The European Parliament's allocated time to decide on whether to support Guaido or not, however, has elapsed.

Speaking at a pro-regime demonstration marking 20 years since his predecessor Hugo Chavez came to power, Maduro ignored those demands and instead reiterated his call to bring forward legislative elections slated for the end of 2020 to this year.

"They [the opposition] want to bring forward elections, let's have elections," he said.

Maduro, making his first public appearance since a military parade in August when he claimed to have been targeted in an attempted assassination, accused Guaido of being a U.S. "puppet" in a coup attempt.

The National Assembly is the only one of Venezuela's five government branches controlled by the opposition.

Guaido had earlier urged the armed forces to allow humanitarian aid from abroad into the country.

"You, soldier ... have the decision in your hands" to allow it in or not, said Guaido. Washington said Saturday it will transport aid to the country in response to a request by Guaido.

Under Maduro's stewardship, oil-dependent Venezuela has fallen into an economic crisis that has left the country suffering from hyperinflation and shortages of food and medicine.

Maduro refuses to let aid into Venezuela, claiming it would precede a U.S.-led military intervention. Guaido called for a new demonstration on Feb. 12.

Speaking at the European Union's headquarters in the east of the capital, he said this month "should be decisive."

Early on Saturday, Yanez said in a social media video that he disavowed Maduro's "dictatorial" authority and recognized Guaido as the acting president. The air force high command strategic planning director said, "Ninety percent of the armed forces don't support the dictator." His defection is "a hard blow" to Maduro, said Rocio San Miguel, an expert on the Venezuelan military. The Venezuelan air force posted a picture of Yanez on its Twitter account tagged with the word "traitor."

Later, in another video, retired Maj. Gen. Jorge Oropeza, a former air force general commander, also said he recognized Guaido as acting president. Oropeza and Yanez were also joined by Jonathan Velasco, Venezuela's ambassador in Iraq. The military and security forces have so far been Maduro's main pillar of support, but there have been signs of unrest in the ranks. On Jan. 21, a group of 27 soldiers rose up against Maduro in Caracas, although that was quickly suppressed.

It helped spark a week of protests in which 40 people were killed in clashes with security forces, with hundreds more arrested.

The challenge to Maduro is his most serious yet, with the United States leading the campaign to drive him from office.

Guaido moved to expand his international support by reassuring China – Venezuela's main creditor and a long-time ally of the socialist regime – that he would honor bilateral agreements if successful in ousting Maduro.

Moscow and Beijing have denounced the "outside interference" in Venezuela.