Venezuela opposition will have to pass over 'our dead bodies' to oust Maduro, minister says 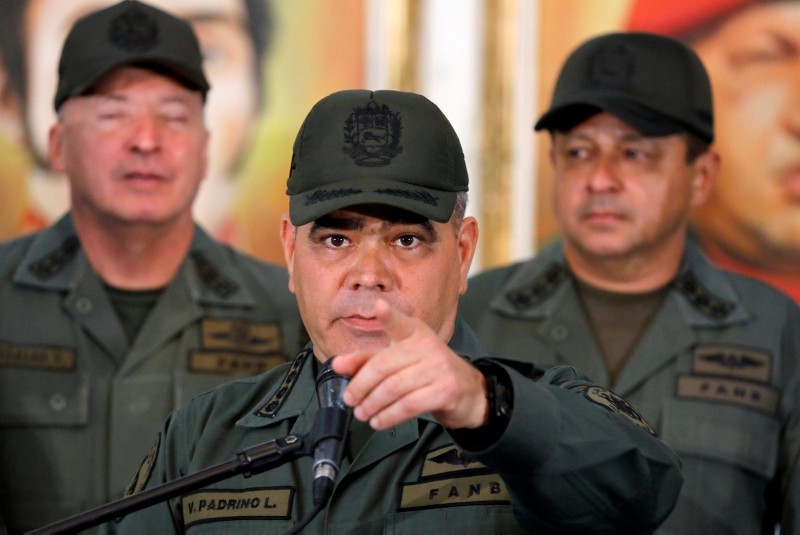 Venezuelan Defense Minister Vladimir Padrino said on Tuesday the country's opposition would have to pass over "our dead bodies" to oust President Nicolas Maduro and impose a new government.

"Those that attempt to be president here in Venezuela ... will have to pass over our dead bodies," he said, in comments broadcast on state TV. Padrino was referring to opposition leader Juan Guaido, who has invoked the constitution to assume an interim presidency, denouncing Maduro as illegitimate.

The army "only has one president: Maduro," the daily El Nacional quoted Padrino as saying.

It will not accept "a puppet government" or "orders from any foreign government or power," the minister said.

His comments came after U.S. President Donald Trump warned the troops on Monday that they will "lose everything" if they continue supporting Maduro.

"We seek a peaceful transition of power, but all options are open," the U.S. president said in an implicit reference to an eventual military intervention in Venezuela.

Guaido on Tuesday urged Venezuelans to appeal to army commanders to allow aid deliveries across the Colombian border against Maduro's orders.

"Let us write to Division General Alberto Mirtiliano Bermudez ... from the heart, with arguments, without violence, without insults, our reasons why he should side with the constitution," Guaido tweeted.

He posted similar tweets with the names of nine other commanders in charge of areas that would play a key role in aid transport, publishing their pictures.

Colombia has said that more than 200 tons of food, medicine and hygiene products, donated mainly by the U.S., have been stored in the border city of Cucuta.

Aid is also due to enter through Brazil and Curacao.

Guaido has set Saturday as the date for it to start going in, but it is unclear how it would get past soldiers guarding the border.

Guaido, who is backed by most Western countries, says 300,000 Venezuelans are at risk of death due to lack of food and medicine after spiralling inflation contributed to widespread shortages.

But Maduro regards the aid plans as a plot to stage a U.S. military intervention and to oust him from power.

The government has staged a media offensive against the aid operation, announcing on Monday that it will organize a concert to match the one planned by British billionaire Richard Branson, who wants to thus collect funds for Venezuela in Cucuta on Friday.

The government's concert will feature artists from several countries on the Simon Bolivar bridge across the border with Colombia on Friday and Saturday, the national television channel quoted Information Minister Jorge Rodriguez as saying.

The event will denounce U.S. "imperial aggression" with the message "hands off Venezuela," the minister added.

Venezuela meanwhile signalled that it was in a position to give rather than receive aid.

Simultaneously with the concert, the government will bring 20,000 boxes of food aid and stage a day of free health care in "solidarity" with poor Colombians in Cucuta, according to the broadcaster.

Venezuela will also receive 300 tons of "technical assistance" including high-cost medicines from Russia, but it has paid for it, Maduro was quoted as saying.