Sen. McSally, first US female fighter pilot to fly in combat, says she was raped in Air Force 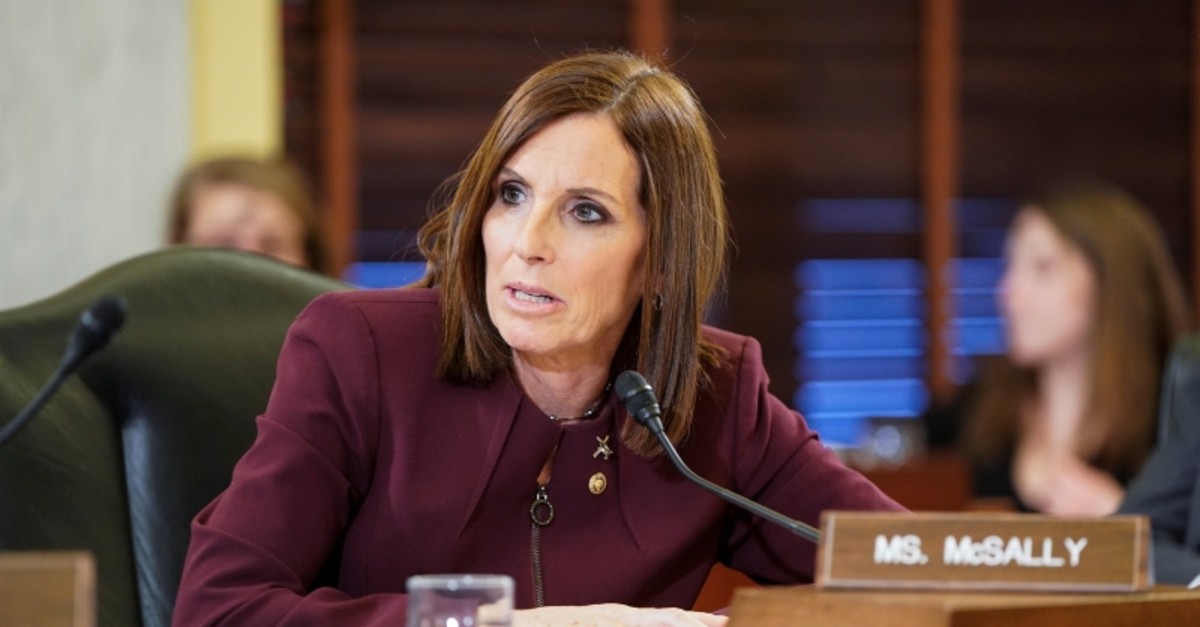 Sen. Martha McSally, R-Ariz., recounts her experience with sexual assault while serving as a colonel in the Air Force on Capitol Hill in Washington, Wednesday, March 6, 2019. (Reuters Photo)
by Associated Press Mar 07, 2019 12:00 am

Sen. Martha McSally, the first female Air Force fighter pilot to fly in combat, said she was sexually assaulted by a superior officer, and later, when she tried to talk about it to military officials, she "felt like the system was raping me all over again."

The Arizona Republican, a 26-year military veteran, made the disclosure Wednesday at a Senate hearing on the military's efforts to prevent sexual assaults and improve the response when they occur. Lawmakers also heard from other service members who spoke of being sexually assaulted and humiliated while serving their country.

McSally said she did not report being raped because she did not trust the system, and she said she was ashamed and confused. She said she was impressed and grateful to the survivors who came forward to help change the system. She was in the ninth class at the Air Force Academy to allow women, and said sexual harassment and assault were prevalent. Victims mostly suffered in silence, she said.

Reading from a prepared statement, she spoke of her pride in the military and her service to the country and her deep confliction over suffering abuse while doing it. She referred to "perpetrators" who had sexually assaulted her, an indication that she had been attacked more than once. The Senate Armed Services Committee room was silent as she went on. Fellow senators, surprised by her statement, lauded her for coming forward.

"I'm deeply affected by that testimony," said Sen. Kirsten Gillibrand, D-N.Y., who has pushed strongly for changes. At a break, McSally hugged others who were appearing before the committee, including a West Point graduate who detailed being raped by her commander.

Capt. Carrie Volpe, an Air Force spokeswoman, said the branch was appalled at and "deeply sorry" about what McSally had experienced.

"The criminal actions reported today by Senator McSally violate every part of what it means to be an Airman," she said in a statement. "And we stand behind her and all victims of sexual assault. We are steadfast in our commitment to eliminate this reprehensible behavior and breach of trust in our ranks."

In an interview with "CBS This Morning," McSally said she considered the prevalence of sexual assault and abuse in the military to be a national security threat. But she said people shouldn't think the problem comes from having women in the military.

"Think about it — if you have a predator, if you have a rapist who is serving in uniform, you don't deal with it by keeping a woman out of their unit. Because that predator is going to go assault someone else," she said.

In her remarks at the Senate hearing, McSally did not go into much detail. She did not say whether her assaults happened at the academy or during active duty. She didn't name any names. She focused on the need for accountability at the commander level and down, and the improvements she's already seen in the system.

McSally stayed silent for years. But later, as she watched the military grapple with how to handle sexual assaults, she felt like she should speak out.

"I was horrified at how my attempt to share generally my experiences was handled," she said. She almost left the Air Force after 18 years.

McSally's revelation comes not long after Sen. Joni Ernst , R-Iowa, detailed her own abuse and assault, and at a time of increased awareness over the problem of harassment and assault in the armed forces and the larger #MeToo movement that roiled Hollywood and major corporations.

McSally said she shares in the disgust of the failures of the military system and many commanders who haven't addressed the problems of sexual misconduct. She said the public must demand that higher-ranking officials be part of the solution, setting the tone for their officers.

"We have come a long way to stop military sexual assault, but we still have a long way to go," the senator said. "It took many years and too many lives ruined."

Defense officials have argued that an increase in reported assaults reflects a greater willingness to report attacks, rather than indicating assaults are rising. Sexual assaults are a highly underreported crime, both in the military and across society. Greater reporting, they argue, shows there is more confidence in the reporting system and greater comfort with the support for victims.

The senator told The Wall Street Journal last year that she had been sexually abused as a teenager by her high school track coach. She said the coach took advantage of her through "emotional manipulation" because her father had died. He denied the allegations.

McSally served in the Air Force from 1988 until 2010 and rose to the rank of colonel before entering politics. She deployed six times to the Middle East and Afghanistan, flying 325 combat hours and earning a Bronze Star and six air medals. She was also the first woman to command a fighter squadron.

McSally, who had worked as a national security aide for Sen. Jon Kyl, R-Ariz., was elected to the House in 2014 and served two terms.

She was appointed by Gov. Doug Ducey, R-Ariz., in December to replace the late GOP Sen. John McCain after she narrowly lost last year's race for Arizona's other Senate seat to Democrat Kyrsten Sinema.

McSally had been critical of Donald Trump in 2016 but embraced a tough stance on immigration and praised the president during last year's midterm election.

She will serve until 2020, when voters will elect someone to finish the final two years of McCain's term.