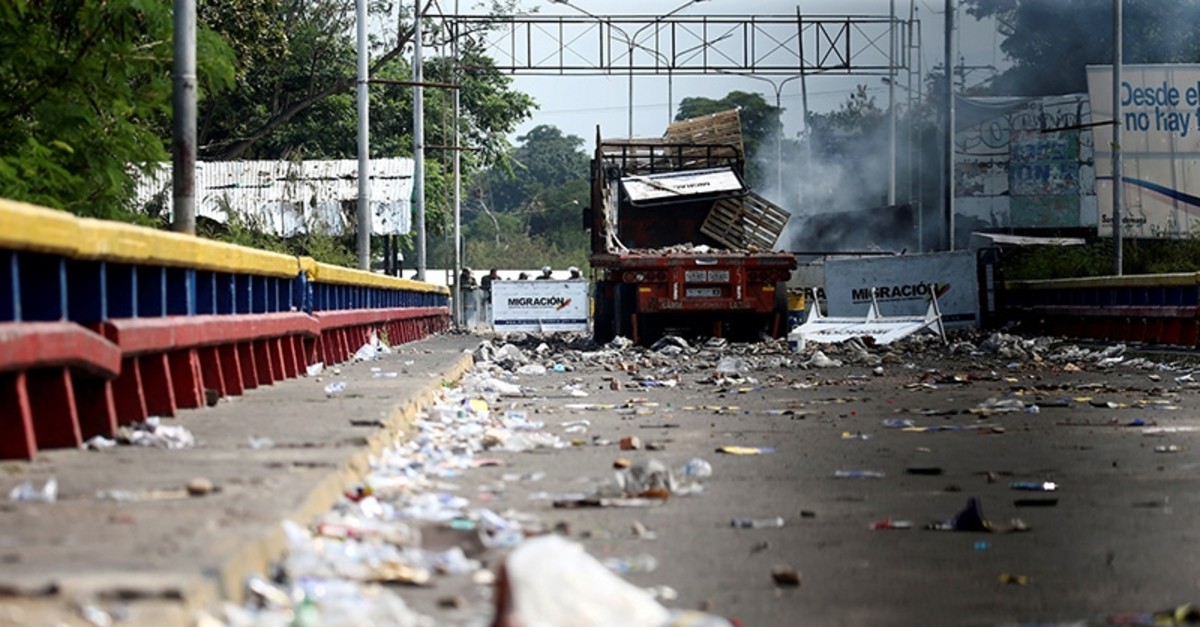 A burnt truck that was used to transport humanitarian aid is seen on the Francisco de Paula Santander cross-border bridge between Colombia and Venezuela in Cucuta, Colombia, on Feb. 24, 2019. (Reuters Photo)
by Daily Sabah Mar 11, 2019 12:00 am

The United States has loudly touted an accusation that an aid convoy attempting to cross from Colombia into Venezuela last month was set afire by forces attached to President Nicolas Maduro, but new footage shows that was not the case.

The New York Times on Sunday published new video footage of the incident, which in fact suggests that a Molotov cocktail thrown by an anti-government protester set the aid ablaze.

The United States used their narrative as another way to vilify Maduro, with Vice President Mike Pence writing that "the tyrant in Caracas danced" while his lackeys "burned food and medicine." President Donald Trump's national security adviser John Bolton wrote on Twitter on March 2 that Maduro "contracts criminals to burn food and medicine intended for the Venezuelan people."

The Venezuelan opposition led by Juan Guaido spread images of the blaze on news media across Latin America as evidence of Maduro's alleged brutality.

However, this grand-scale slander was bound to come to light. And the results are damning: that the opposition itself set the convoy on fire.

The previously unpublished footage from The Times shows an anti-Maduro protester throw a Molotov cocktail toward Venezuelan police blocking the bridge into the country. However, the rag used to light the bomb, flies apart from the bottle, landing on an aid truck, which catches fire.

The Times said the same protester can be seen 20 minutes earlier in different footage throwing a homemade bomb at another aid truck but not sparking a blaze.

Maduro critics also claimed that the president ordered medicine on the aid convoy to be set on fire despite citizens that have died in hospitals due to lack of medical supplies. However, The Times investigation shows this claim to be unsubstantiated as well.

In fact, the U.S. Agency for International Development (USAID), which supplied most of the aid on the bridge, did not list medicine as one of the shipment contents. An opposition official present on the bridge that day told The Times that the burned supplies included medical supplies like gloves and face masks, but no medicine.

When The Times contacted U.S. officials about their side of the story, they responded cautiously.

"Eyewitness accounts indicate that the fire started when Maduro's forces violently blocked the entry of humanitarian assistance," they said, backing down from direct accusations against the Venezuelan president.

The officials also said that regardless of the circumstances of the fire, they still blame Maduro for the incident since his authorities blocked the bridge.

President Maduro last month responded to the accusations against his government.

"They tried a false flag operation, that supposedly the people of Venezuela had burned a truck carrying rotten food. No, no, no, it was they themselves, it was the criminals of Ivan Duque," he told a gathering, referring to the Colombian president.

The Colombian government had quickly jumped on board with the U.S. narrative of the incident, blaming "gangs" following Maduro's orders for the burning of the aid.

Duque's government also sent CCTV footage to U.S. officials. The video was edited to show tear gas canisters thrown toward the aid convoy by Venezuelan security forces exploding upon impact, supposedly sparking the blaze. But the government omitted the 13 minutes of footage before the fire broke out, and refused to release it despite multiple requests from The New York Times.

Guaido, who heads the National Assembly, declared himself acting president of Venezuela on Jan. 23, a move which was supported by the U.S. and many European and Latin American countries.