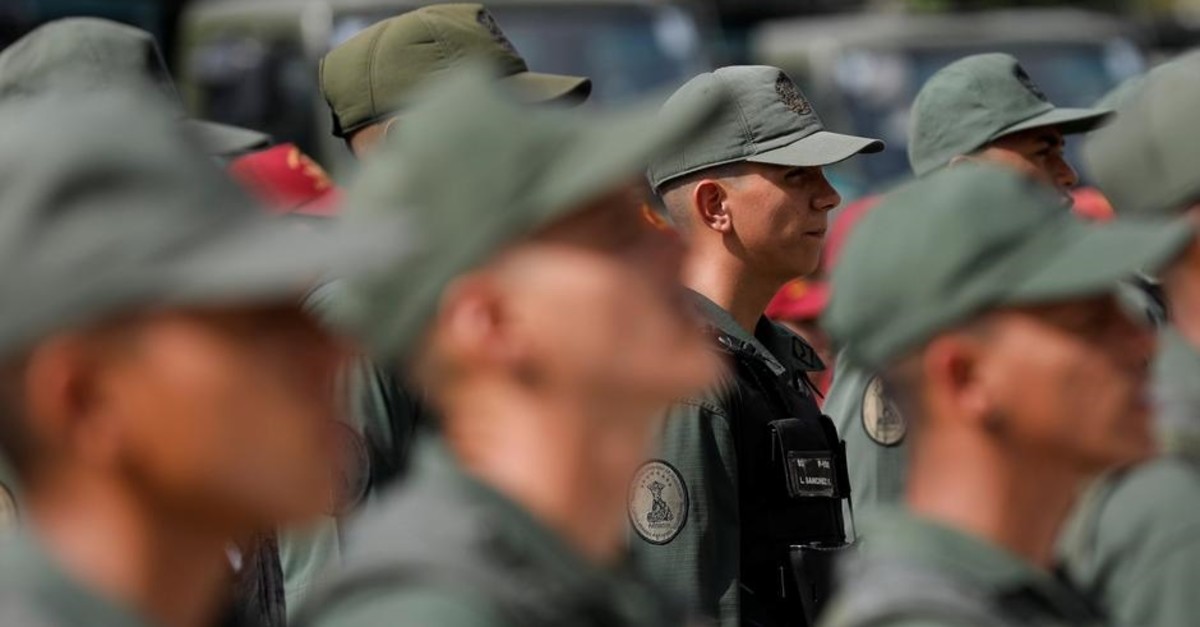 Soldiers stand in formation before the start of a ceremony to kick off the distribution of security forcers and voting materials to be used in the upcoming presidential elections, in Caracas, Venezuela May 15, 2018. (Reuters Photo)
by Associated Press Mar 18, 2019 12:00 am
About 1,000 members of the Venezuelan security forces have fled to Colombia since last month, giving up weapons and uniforms as they abandoned the government of Venezuelan President Nicolas Maduro, Colombian authorities said Monday.

Colombia's foreign ministry released the updated number of Venezuelan police and military personnel who crossed the border, many around the time of a Feb. 23 attempt by opposition leader Juan Guaido to deliver U.S.-provided humanitarian aid to Venezuela. The attempt failed because Venezuelan forces blocked trucks trying to cross from Colombia into Venezuela.

The deserters have received lodging, health care and legal aid, and were accompanied by some 400 family members, Colombian officials said. Colombia, the United States and about 50 other countries support Guaido's claim that he is the interim president of Venezuela and that Maduro is illegitimate because his re-election last year was marred by irregularities.

Despite the desertions, Maduro has retained the support of Venezuela's key military leaders, who are considered pivotal in determining the outcome of the country's power struggle. Maduro alleges that Guaido is a collaborator in a U.S. plot to overthrow the government in Venezuela, whose population is enduring hyperinflation and a scarcity of medicine and other necessities.

More than 3 million Venezuelans have fled the country in recent years, about one-third of them finding refuge in Colombia.

Nearly a week after Venezuela's worst blackouts inflicted more hardship across the country, Maduro was said to be planning a Cabinet reshuffle. Vice President Delcy Rodriguez made the announcement on Twitter on Sunday, though she did not provide details. Some past reshuffles have entailed rotations of ministers rather than a major overhaul of leadership.

Guaido on Monday scoffed at the report of Cabinet changes, telling journalists that it merely reflects how the government is weakening and "without answers."

He again said that the nationwide power outages were the result of government corruption and mismanagement and not, as Maduro claimed, an act of sabotage directed by the United States.

U.S. and Russian officials, meanwhile, were meeting in Rome this week to discuss the crisis in Venezuela.

Elliott Abrams, the U.S. special envoy for Venezuela, was to hold talks with Russian Deputy Foreign Minister Sergei Ryabkov on Monday and Tuesday, the U.S. State Department said. Ryabkov said in comments carried by Russian media that, "We will do everything to protect our cooperation with Caracas."

Moscow supports Maduro while Washington has imposed oil sanctions on Venezuela in an attempt to push Maduro from power.