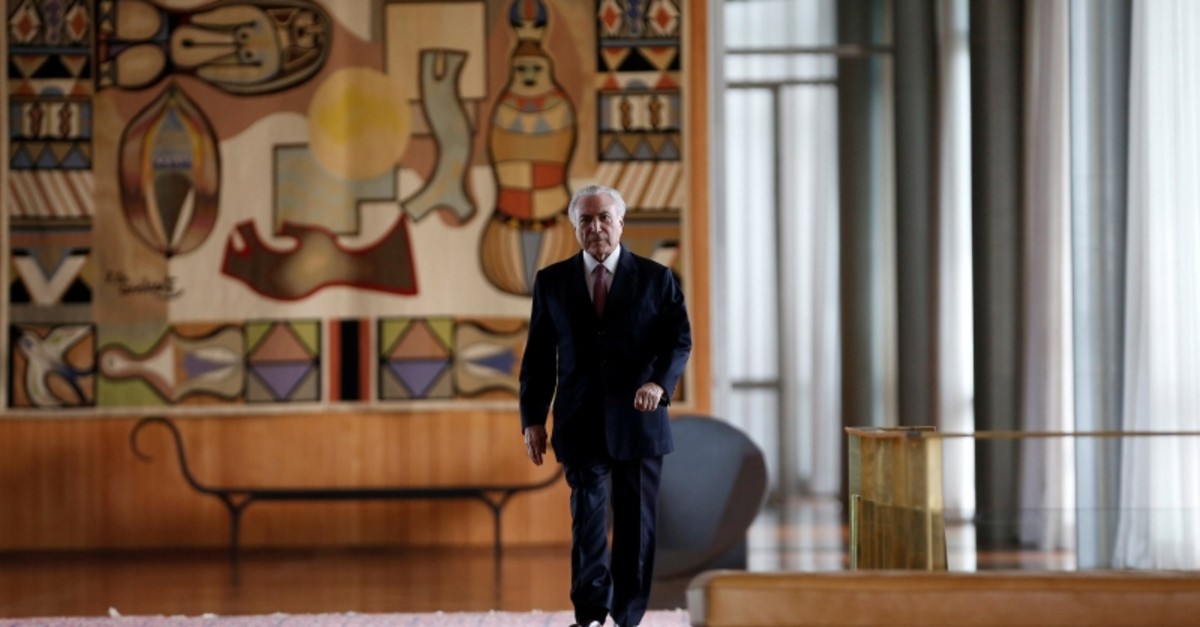 Brazil's ex-president Michel Temer, who was arrested Thursday as part of a sprawling anti-corruption probe, was the leader of a "criminal organization," the federal prosecutor's office alleged in a statement.

Temer was Brazil's most unpopular leader ever and faced a number of corruption accusations on leaving office last year. He has repeatedly denied wrongdoing.

Temer, a center-right politician, took over as a caretaker figure after the last Workers Party president, Dilma Rousseff, was impeached and removed from office in 2016.

In a statement, the Prosecutors Office in Rio de Janeiro said that Judge Marcelo Breitas had issued an arrest order for Temer, as well as Moreira Franco, a former minister and close ally of Temer, and eight others.

Construction company Engevix paid Temer bribes in exchange for a contract to build a nuclear powerplant in the city of Angra dos Reis in the southern part of Rio de Janeiro state, prosecutors said.

One of the Engevix executives told prosecutors in a plea bargain testimony that he paid more than $300,000 in 2014 to a company owned by a close Temer associate, Col. Joao Baptista Lima Filho. An arrest warrant was also issued for Lima Filho.

Globo Television showed images of the former president being accompanied by police in Sao Paulo, where Temer lives. Helicopter images showed Temer getting out of a police convoy at an airport, presumably to be brought to Rio de Janeiro and processed.

"The party hopes that the Justice Department re-establishes individual liberties and the presumption of innocence," it read.

Breitas is overseeing the Rio portion of a massive corruption probe involving kickbacks to politicians and public officials. Since launching in March 2014, the so-called Car Wash investigation has led to the jailing of top businessmen and politicians, including ex-President Luiz Inacio Lula da Silva, who Brazilians universally call Lula.

Former Judge Sergio Moro, who oversaw many Car Wash cases and became an internationally known anti-corruption crusader, stepped down at the end of last year to become justice minister.

Many worried that Moro's absence could hurt the investigations. And the Car Wash probe has suffered a handful of recent defeats, including a decision by the Supreme Court to allow some corruption cases involving campaign finance, which figured heavily in the probe, to be tried by electoral courts.

This week, Moro himself suffered a setback when the speaker of the lower Chamber of Deputies in Congress slammed a tough-on-crime bill the former judge put forward and said it would only be considered after a major reform to the pension system.

Breitas' decision to arrest Temer will go a long way to answering questions about the future of the probe.

"If Lula and Temer can go to jail, who cannot?" said Carlos Melo, political science professor at Insper University in Sao Paulo. "There are several formerly high-ranking politicians not in office at the moment, which makes them more exposed to police investigations."

From the get-go, Temer's administration was hit with several scandals, including some involving the president himself. Temer's approval ratings were routinely below 10 percent, and he was frequently booed.

In the course of less than two years, three times the attorney general charged Temer with corruption. Because he was a sitting president, he could only be tried if two-thirds of the lower chamber in Congress agreed. Temer twice mustered enough support in Congress to avoid prosecution and his term ended before the third case proceeded far enough for Congress to vote.

Temer, 78, left office on Jan. 1 and no longer has the partial immunity that helped him avoid prosecution.

Asked about looming cases against him in December, Temer said he wasn't worried and did not believe he would be arrested.

"I'm calm. I am not the least bit worried," Temer said. "Those (charges) are such absurd things that a more objective and less passionate mind will see that and will say, "those allegations are irrelevant."