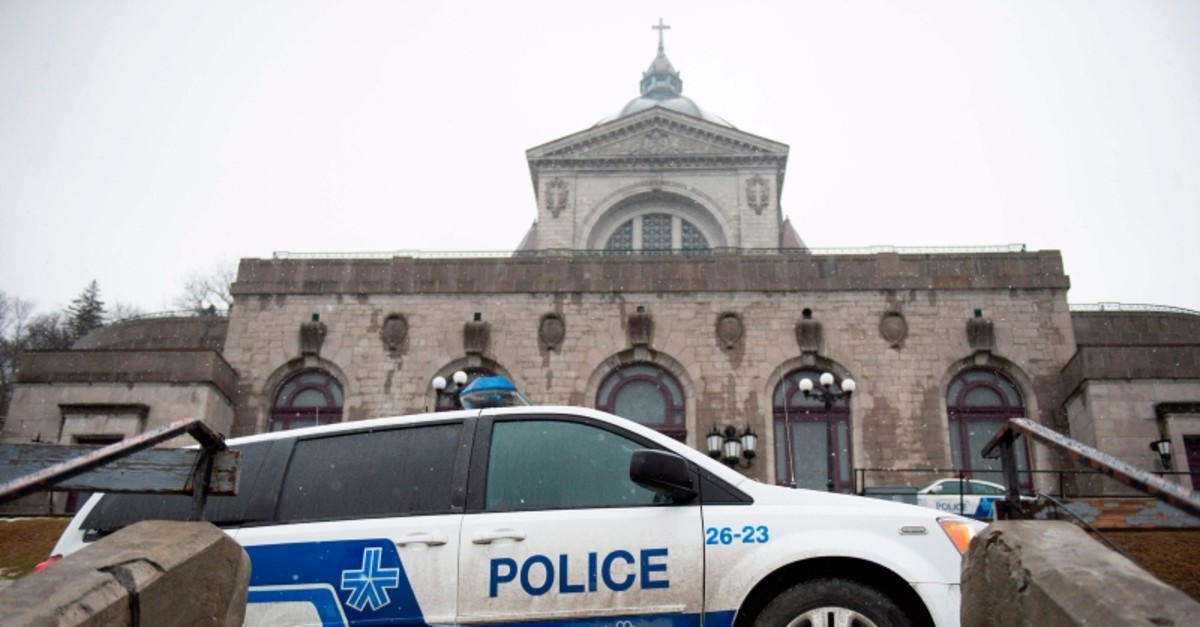 A priest was stabbed in front of his congregation live on television during morning mass on Friday at Canada's biggest church, in what police described as an isolated incident.

Footage broadcast on a Catholic television station and picked up by the top-rated CTV network showed a man in jeans, parka and white baseball cap approach Claude Grou at St. Joseph's Oratory in Montreal, in front of 60 horrified parishioners.

He is seen chasing the priest around the altar and standing menacingly over the 77-year-old as he falls to the ground, scattering candles and a banner, before stabbing his victim.

Witness Adele Plamondon told public broadcaster Radio-Canada the priest -- who escaped with minor injuries -- was about to start reading the gospel, when "this man drew a knife and ran up to stab him."

"I'd thought he was just going to kneel in front of the altar to pray, like many people do," she said.

The suspect remained silent during the assault but appeared "very determined," Plamondon added.

Grou recovered enough to get to his feet and is seen backing away as security officers surround the assailant, who drops his knife. Three guards restrained him while others tended to Grou, who appeared to be in shock.

The priest was taken to the hospital, where his condition was said to be stable, with police reporting to AFP that he had been "slightly wounded in the upper body."

The church was cordoned off, but services resumed later in the day.

The 26-year-old suspect, whose name was not released, was scheduled to appear in court on Saturday via video link from a detention facility.

Police did not reveal a motive for the attack, but spokeswoman Caroline Chevrefils told AFP he is "known to police."

"This was an isolated attack, and there is nothing to link it to terrorism," she added.

Church spokeswoman Celine Barbeau said Grou was conscious when he was rushed from the scene.

"We are hopeful he will pull through," she added.

Prime Minister Justin Trudeau spoke out to condemn the "horrible attack" while mayor Valerie Plante called the assault an "inexcusable act that has no place in Montreal."

"We are all in shock over this act of violence in a place dedicated to peace," Montreal Archbishop Christian Lepine said in a statement, lamenting that places of worship could be targets of violence.

Saint Joseph's Oratory, built from 1920 to 1955, sits atop the north face of Mount Royal overlooking Canada's second-largest metropolis and attracts some 2 million pilgrims and tourists each year.

The national shrine was founded by Brother Andre Bessette, a central religious figure among French Canadians, who was canonized by Pope Benedict in 2010 for his devotion to the sick and disabled.

Jean-Francois Lefebvre, who was working in front of the oratory when the attack unfolded, said he saw police arrive and take away the suspect in handcuffs.

"I find this incident very unfortunate, in a place so peaceful that attracts millions of visitors," he told AFP.

"With what happened in Christchurch, it seems that all places of worship are being targeted," he added, referencing a terrorist attack on two mosques in New Zealand last Friday that left 50 Muslims dead and 50 wounded.

In 2017, a shooter also gunned down six worshippers at a mosque in Quebec City.