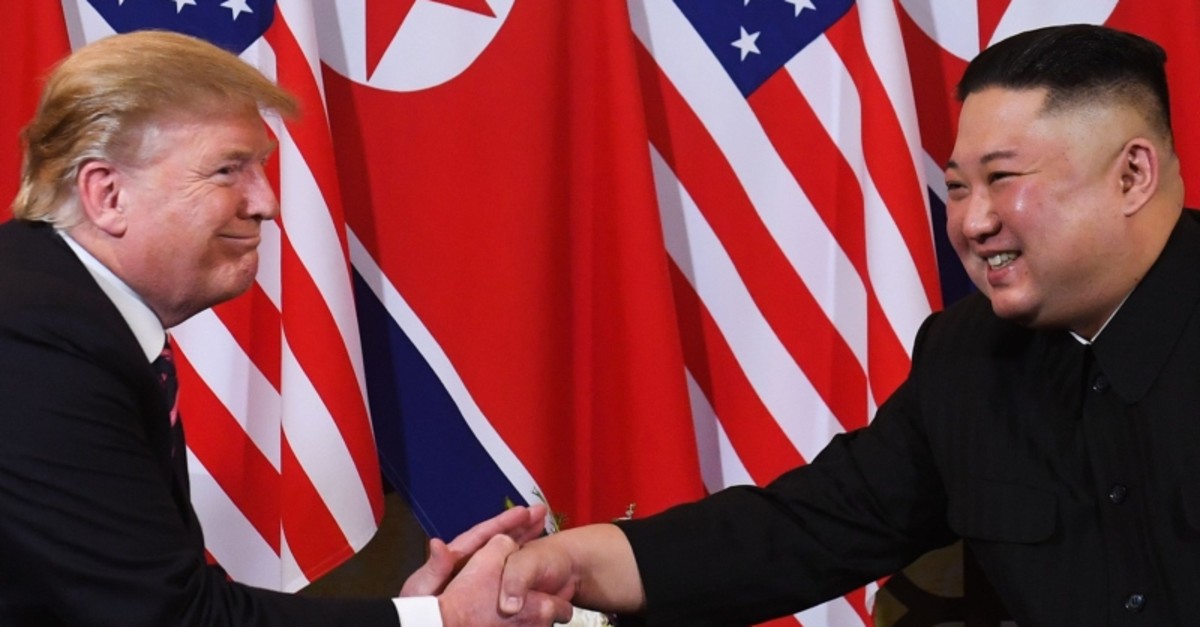 President Donald Trump tweeted that he had reversed his administration's decision to slap new sanctions on North Korea — a move that left officials at the Treasury Department and observers across Washington scratching their heads.

Trump delivered the news Friday from his private club in Palm Beach, Florida.

"It was announced today by the U.S. Treasury that additional large scale Sanctions would be added to those already existing Sanctions on North Korea," he tweeted. "I have today ordered the withdrawal of those additional Sanctions!"

The problem: The Treasury did not announce any new action affecting North Korea on Friday, let alone "additional large scale Sanctions." The administration on Thursday did sanction two Chinese shipping companies suspected of helping North Korea evade sanctions — but not the country itself.

So what was Trump referring to? The White House wouldn't say. Press secretary Sarah Sanders issued only a brief statement saying that Trump "likes" North Korean leader Kim Jong Un and "doesn't think these sanctions will be necessary."

But a person familiar with the action later told The Associated Press that Trump's tweet was not about reversing existing sanctions. Instead, the person said, the president was talking about not going forward with additional large-scale sanctions on North Korea at this time. The person was not authorized to discuss the president's comments and spoke on condition of anonymity.

It was the latest example of the confusion sometimes sparked by Trump's governance-by-tweet, which has often sent agency heads scrambling, trying to figure out what he meant or trying to implement policy proclamations that have not gone through traditional vetting processes. That includes when Trump announced, via tweet, that transgender people would no longer be allowed to serve in the military.

Trump's tweet took Treasury officials by surprise and prompted reporters to bombard officials at the White House National Security Council and Treasury Department with questions. All declined to comment.

The reversal came a day after the Treasury Department announced the first targeted actions taken against Pyongyang since Trump and Kim met in Hanoi, Vietnam, last month for negotiations about North Korea's nuclear weapons program.

The meeting ended without a deal.

In addition to Trump's talks with North Korea, the U.S. is knee-deep in delicate trade negotiations with China.

It's unclear whether Trump's decision was related to North Korea's move on Friday to abruptly withdraw its staff from a liaison office with South Korea. That development is likely to put a damper on ties between the North and South and further complicate global diplomacy on North Korea's nuclear program. The withdrawal also is seen as a major setback for South Korean President Moon Jae-in, who has sought to improve relations with North Korea alongside the nuclear negotiations between the North and the United States.

North Korea said it was withdrawing its staff under instructions from unspecified "higher-level authorities," according to a Unification Ministry statement. It didn't say whether the withdrawal would be temporary or permanent. South Korea called the North's decision regrettable and urged the North to return its staff to the liaison office soon.

When the administration announced the sanctions on Thursday against the Chinese shipping companies, administration officials briefed reporters, saying the sanctions were evidence the U.S. was maintaining pressure on North Korea in an effort to coax its leader to give up his nuclear weapons program.

Calls to the two companies rang without response Friday or were answered by people who immediately hung up the phone.

The Treasury Department, in coordination with the State Department and the U.S. Coast Guard, also updated a North Korea shipping advisory, adding dozens of vessels thought to be doing ship-to-ship transfers with North Korean tankers or exported North Korean coal in violation of sanctions.

Two senior administration officials, who briefed reporters on condition of anonymity to discuss U.S. policy on North Korea, said that illegal ship-to-ship transfers that violate U.S. and international sanctions have increased and that not all countries, including China, are implementing the restrictions. They said the deceptive practices include disabling or manipulating ship identification systems, repainting the names on vessels and falsifying cargo documents.