Trump refers to Netanyahu as ‘your prime minister’ to US Jews, says Golan Heights decision was on impulse 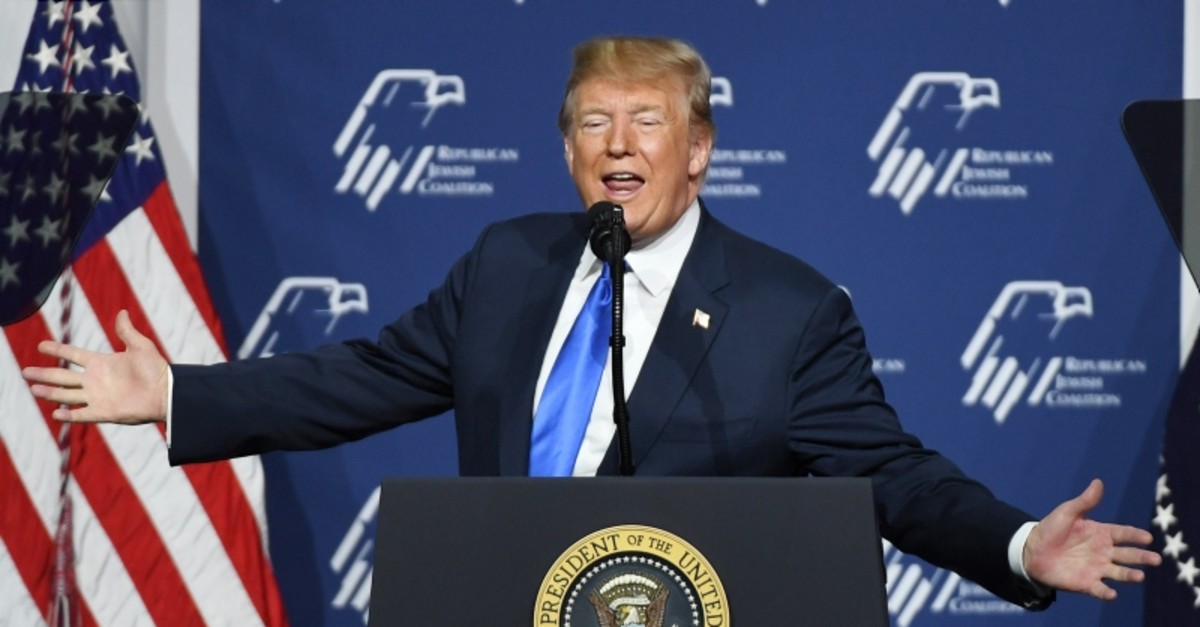 U.S. President Donald Trump said on Saturday he made the controversial decision to recognize Israel's 1981 annexation of the Golan Heights after getting a quick history lesson and told the American Jews that Israeli Prime Minister Benjamin Netanyahu was "your prime minister," confusing Jews with Israelis.

Speaking at the Republican Jewish Coalition gathering in Las Vegas, Trump said he made the snap decision during a discussion with his top Middle East peace advisers, including the U.S. ambassador to Israel, David Friedman, and son-in-law Jared Kushner.

"I said, 'Fellows, do me a favor. Give me a little history, quick. Want to go fast. I got a lot of things I'm working on: China, North Korea. Give me a quickie," Trump said to laughter from the Las Vegas crowd.

"'How do you like the idea of me recognizing exactly what we're discussing?'" said Trump, recounting the conversation.

Trump, who typically demands short sharp briefings and is known for his colorful retelling of stories, said Friedman was shocked, "like a wonderful, beautiful baby," and asked the President if he would actually do it.

Netanyahu visited Trump last month. At their March 25 meeting, Trump signed a proclamation officially granting U.S. recognition of the Golan as Israeli territory, a dramatic departure from decades of U.S. policy. The move, which Trump announced in a tweet days prior, was widely seen as an attempt to boost Netanyahu who is up for re-election on April 9.

Israel captured the Golan in the 1967 Middle East war and annexed it in 1981 in a move not recognized internationally.

"I went - 'BING!' - it was done," Trump said on Saturday, describing the swiftness of his decision. "We make fast decisions. And we make good decisions."

Meanwhile, Trump once again confused his father's birthplace during his speech, saying his father was born in Brooklyn, while his father, Fred Trump, was actually from Bronx.

Trump's speech comes weeks after he suggested Democrats "hate" Jews. His remark followed an internal fight among Democrats over how to respond to comments by Rep. Ilhan Omar, D-Minn., that some criticized as anti-Semitic.

He also accused Democrats of allowing anti-Semitism to "take root" in their party.

Before Trump's appearance, people assembled for the event carried signs with "We are Jews for Trump" and "Trump" written in Hebrew. Dozens of men and several women wore red yarmulkes with "Trump" in white that were distributed at the event.

Trump also took credit for eliminating hundreds of millions of dollars in aid to the Palestinians and for pulling the U.S. out of several U.N. organizations, the U.N. Human Rights Council and UNESCO, citing anti-Israel bias in their agendas.

Trump criticized some 2020 Democrats who have suggesting they would re-enter the 2015 Iran nuclear deal, from which Trump withdrew the United States. The agreement was fiercely opposed by Israeli Prime Minister Benjamin Netanyahu, who has cheered as Trump re-imposed stringent new sanctions on the country that Israel regards as an existential threat. Trump is closely aligned with Netanayu, who's seeking to return power in Tuesday's national election.

Despite his criticism of Democrats, Trump has faced his own criticism from the Jewish community. Trump was slow to condemn white supremacists who marched violently in Charlottesville, Virginia, in 2017. The previous year, he circulated an image of a six-pointed star alongside a photo of Hillary Clinton, a pile of money and the words "most corrupt candidate ever."

When he addressed the RJC in 2015 he said he didn't expect to earn their support because he wouldn't take their money. "You want to control your politicians, that's fine," Trump said at the time. Ultimately, the group and many of its donors backed Trump.