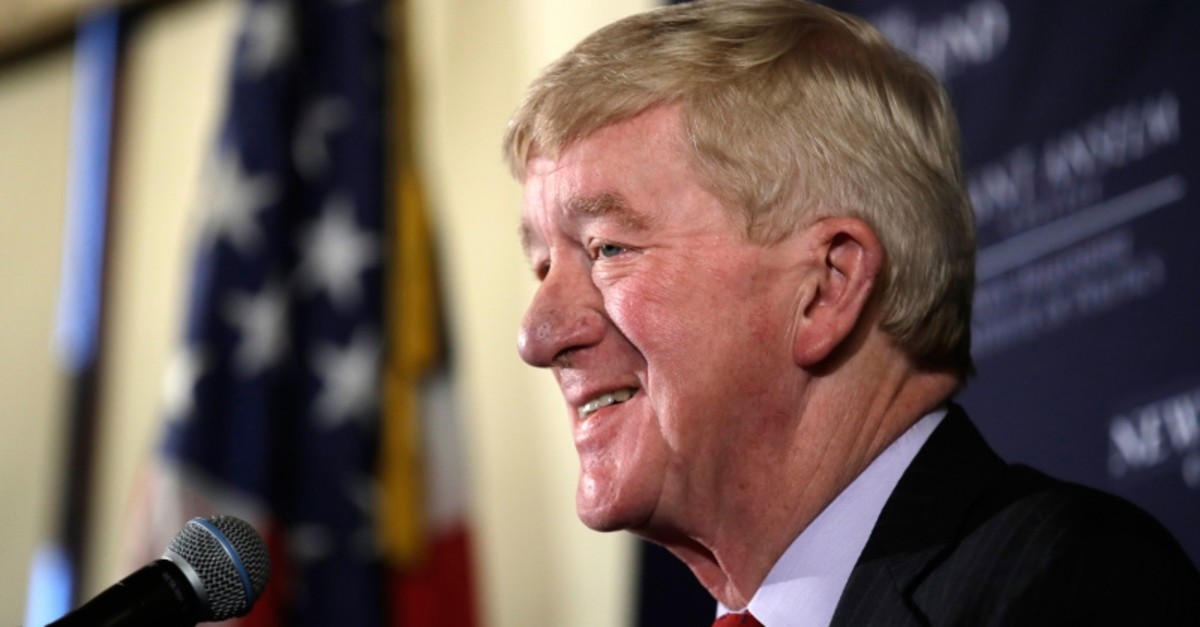 William Weld, a former governor of Massachusetts who two years ago ran for vice president on the Libertarian Party ticket, on Monday became the first Republican to challenge President Donald Trump in the United States' 2020 primaries.

Weld, 73, said in announcing his candidacy that "it is time to return to the principles of Lincoln — equality, dignity and opportunity for all." He said, "There is no greater cause on earth than to preserve what truly makes America great. I am ready to lead that fight."

Weld has accused Trump of leaving the nation in "grave peril" and has said his "priorities are skewed toward promotion of himself rather than for the good of the country." While Trump's overall approval ratings have been poor for much of his presidency, he remains popular with Republican voters. The Republican National Committee in January issued a nonbinding resolution to declare the party's undivided support for Trump.

The move by Weld makes Trump the first incumbent president since George H.W. Bush in 1992 to face a notable primary challenge.

Primary challengers to incumbent presidents have never been successful at stealing the nomination in the modern era, but embarrassing intraparty contests have proved to be the making of one-term leaders, seeding weaknesses that were later exploited by a general-election rival.

Trump's campaign has taken extraordinary steps in cementing control over the RNC and the broader nomination process as it seeks to minimize the risk of any potential challenger doing the same to the president. His campaign recently reported raising $30 million in the first quarter of this year, while Democrats are raising less money than in previous cycles.

Fiscally conservative but socially liberal, Weld is known for an unconventional, at times quirky, political style and a long history of friction with the party he now seeks to lead.

Weld endorsed Democrat Barack Obama over Republican nominee John McCain in 2008, later saying it was a mistake to do so, and has enjoyed a decadeslong friendship with the Clintons, which began early in his career when he served alongside Hillary Clinton as a lawyer for the House Judiciary Committee during the Watergate proceedings.

Weld's nomination by President Bill Clinton to be U.S. ambassador to Mexico touched off a bitter public spat with then-Sen. Jesse Helms, a conservative Republican from South Carolina who chaired the Senate Foreign Relations Committee. Years earlier, Weld was among a handful of top Justice Department officials to resign in protest over alleged ethical violations by then-Attorney General Ed Meese, long a favorite of conservatives.

With little in the way of organization or outside money, and at odds with a majority of GOP voters who solidly support Trump, Weld's longshot campaign will target disaffected Republicans and independents who share his disdain for the president and embrace libertarian values of small government, free trade and free markets, and personal freedom.

Alternately a politician, federal prosecutor, investment banker, lobbyist and even novelist — his political mystery called "Mackerel by Moonlight" was published to mixed reviews in 1998 — the Harvard-educated scion of a prominent Boston family was a lifelong Republican before bolting the GOP to run on the Libertarian Party ticket with former New Mexico Gov. Gary Johnson in 2016.

Johnson and Weld received about 4.5 million votes, a little more than 3% of the national popular vote.

Despite a pledge to libertarians that he would remain loyal to the party going forward, Weld on Jan. 17 walked into the clerk's office of the Massachusetts town where he lives and re-registered with the GOP, adding to speculation that he would challenge Trump in the primaries.

Weld has not won a political race since being re-elected governor by a landslide in his heavily Democratic state in 1994. He was first elected to the office in 1990, defeating a conservative Democratic candidate, and quickly became one of Massachusetts' most popular governors in recent history.

While holding the line on spending and taxes, Weld as governor embraced liberal positions at odds with national Republicans on abortion and gay rights. His low-key style and sharp wit also seemed to play well with voters as did his penchant for the unexpected: He once ended a news conference touting progress in cleaning up Boston's polluted Charles River by diving fully clothed into the waterway.

After winning a second term, Weld's attention appeared to drift away from the governor's office and toward other political pursuits. He briefly entertained a run for president in 1996 before mounting an unsuccessful campaign that year to unseat Democratic Sen. John Kerry.

He resigned as governor the following year after Clinton nominated him to be ambassador to Mexico, but it was a post he would never hold. Helms dug in his heels and refused to schedule a hearing on the nomination, claiming among other things that Weld's support for medical marijuana and needle exchange programs for drug users disqualified him from serving in Mexico because of that country's history of drug trafficking.

Weld fired back at Helms, suggesting it was un-American for Helms to refuse to hold a public hearing on a high-profile ambassadorial nomination.

Weld left the public arena but later moved to New York, where he would make a brief, unsuccessful bid to become the first person since Sam Houston to serve as governor of two different states.