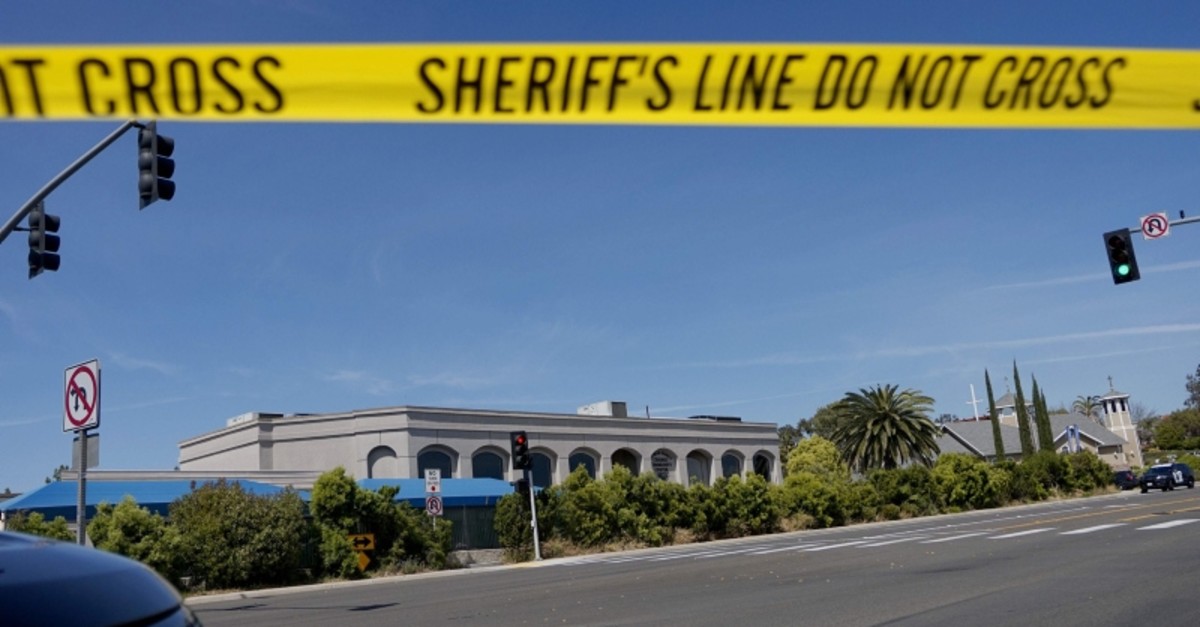 A 19-year-old man who authorities said gave himself up to police shortly after carrying out a deadly shooting in a Southern California synagogue filled with Sabbath worshippers is also under investigation in connection with an unsolved mosque arson.

The gunman walked into the suburban San Diego synagogue late Saturday morning, the last day of the week-long Jewish holiday of Passover, and opened fire with an assault-style rifle, killing one woman inside and wounding three others, including the rabbi, authorities said.

He then sped away in a car, escaping an off-duty U.S. Border Patrol agent who shot at the getaway vehicle but missed the suspect, but the suspect pulled over and surrendered to police officers a short time later.

The suspect was later identified as John Earnest, 19, of San Diego, the apparent author of a "manifesto" who claimed to have set a nearby mosque on fire last month and professed drawing inspiration from the gunman who killed nearly 50 people at two mosques in New Zealand.

San Diego County Sheriff Bill Gore said police and FBI were investigating Earnest's "possible involvement" in the March 24 pre-dawn arson fire at the Islamic Center of Escondido, a town about 15 miles (24 km) north of Poway. No one was hurt at the mosque fire.

Gore said Earnest has no prior criminal record.

Saturday's gun violence at the Congregation Chabad temple in the town of Poway, California, about 23 miles (37 km) north of downtown San Diego, unfolded six months to the day after 11 worshippers were killed and six others wounded by a gunman who stormed the Tree of Life synagogue in Pittsburgh yelling, "All Jews must die."

The assailant in that massacre, said to be the deadliest attack ever against Jews on U.S. soil, was also arrested.

San Diego County Sheriff's Department officials issued a statement saying the gunman in Saturday's attack was believed to have acted alone and that there "are no known threats to religious gatherings."

But the Passover violence came amid an upsurge in reports of anti-Semitism nationwide and abroad and followed a recent spate of deadly attacks on places of worship around the world.

Suicide bombings during Easter Sunday services at several churches in Sri Lanka killed more than 250 people. A terrorist who opened fire at two mosques in Christchurch, New Zealand, on March 15 left 49 people dead and more than 40 wounded, some as they knelt in prayer.

Poway Mayor Steve Vaus characterized Saturday's shooting as a "hate crime," saying his assessment was based on statements uttered by the gunman when he entered the synagogue.

At a news conference later, Gore told reporters: "Clearly it's being investigated as a homicide, but we're also looking at the hate crime possible violation as well as federal civil rights violations."

A rambling, violently anti-Semitic, anti-Muslim screed written by an individual calling himself John Earnest was found posted to the online text-storage site Pastebin.com and the file-storage site Mediafire.com. Links to the content on both sources were posted on the Internet message board 8chan.

In that letter, the author also claimed credit for the Escondido mosque arson, which was put out by congregants inside who were alerted by the smell of smoke. Local media at the time reported that a message scrawled on the driveway of the mosque mentioned the New Zealand massacre.

The synagogue on Saturday was hosting a holiday celebration due to culminate in a final Passover meal that evening. Authorities said about 100 people were inside the temple, where Saturday services marking the Jewish Sabbath would have been under way or have just concluded.

Eyewitnesses reported hearing about a dozen gunshots, punctuated by the sound of a man yelling inside the temple.

Gore told reporters that four people were struck by gunfire and taken to a nearby hospital, where one victim, an "older woman," died. Authorities said the rabbi underwent surgery for treatment of wounds to his hands. The sheriff's office said the two other victims, a 34-year-old man and a girl, were each struck by shrapnel but were "doing well."