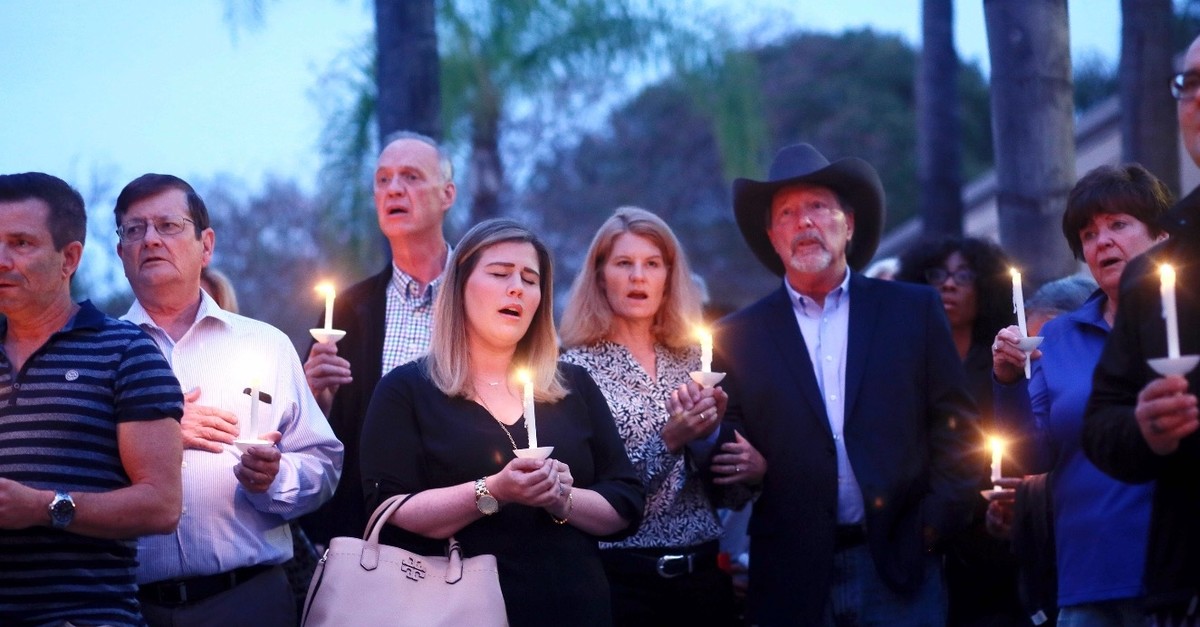 Mourners, including Poway Mayor Steve Vaus (1st right) participate in a candlelight vigil for the victims of the Chabad of Poway Synagogue, Poway, California, April 27, 2019.
by Daily Sabah with Agencies Apr 29, 2019 12:09 am

Following a recent spate of deadly attacks on places of worship around the world, hate-fueled violence against different religious groups is spreading across the U.S.

In a latest example of rising hate crimes in the country, a man in the U.S. state of California deliberately plowed his car into a group of eight pedestrians because he thought some of them were Muslim, local authorities have said. According to the Associated Press (AP) news agency, a teenage girl was the most seriously injured in the incident and is currently in a coma with severe brain trauma.

Jay Boyarsky, the chief assistant district attorney for Santa Clara, said the charges carry a sentence of life in prison and he will file hate crime allegations if warranted. "There is very appalling and disturbing evidence that at least one or two of these victims were targeted based on the defendant's view of what their race or religion may have been," he said.

According to the FBI, hate crimes surged by at least 17 percent in the U.S. in 2017, with 7,175 documented hate crimes, with at least 15 of those resulting in murders. The Southern Poverty Law Center (SPLC) has documented a sharp rise in hate incidents following President Donald Trump's election in November 2016, with the number of active hate groups peaking to an all-time high of 1,020 in 2018.

A 19-year-old man who authorities said gave himself up to police shortly after carrying out a deadly shooting in a Southern California synagogue is also under investigation in connection with an unsolved mosque arson.

The gunman walked into the suburban San Diego synagogue late Saturday morning, the last day of the weeklong Jewish holiday of Passover, and opened fire with an assault-style rifle, killing one woman inside and wounding three others, including the rabbi, authorities said.

He then sped away in a car, escaping an off-duty U.S. Border Patrol agent who shot at the getaway vehicle but missed the suspect. The suspect pulled over and surrendered to police officers a short time later.

The suspect was later identified as John Earnest, 19, of San Diego, the apparent author of a "manifesto," who claimed to have set a nearby mosque on fire last month and professed drawing inspiration from the gunman who killed nearly 50 people at two mosques in New Zealand.

Saturday's gun violence at the Congregation Chabad temple in the town of Poway, California, about 23 miles (37 km) north of downtown San Diego, unfolded six months to the day after 11 worshipers were killed and six others wounded by a gunman who stormed the Tree of Life synagogue in Pittsburgh shouting, "All Jews must die." The assailant in that massacre, said to be the deadliest attack ever against Jews on U.S. soil, was also arrested.

The Passover violence came amid an upsurge in reports of anti-Semitism nationwide and abroad. Suicide bombings during Easter Sunday services at several churches in Sri Lanka killed more than 250 people.

A terrorist who opened fire at two mosques in Christchurch, New Zealand, on March 15 left 50 people dead and more than 40 wounded, some as they knelt in prayer.

Amid President Trump's rhetoric against Muslims and immigrants, anti-Muslim sentiments are spreading among Americans – especially Republicans – who are more likely to hold negative perceptions of Muslims, based on a survey released last year.

According to research conducted by the New America Foundation and the American Muslim Institution, two in five Americans think that Islam is not compatible with the country's values. Among Republicans, the percentage is higher with 71 percent of them feeling uncomfortable with Islam. About 56 percent of Republicans also admitted they would be concerned if a mosque was built in their neighborhood, the study reveals.

Since the 2016 presidential election, President Trump's views expressed on the campaign trail and from the Oval Office have stoked the fires of Islamophobic rhetoric in the political mainstream, proliferating hate speech and anti-Muslim sentiment.