Suspect identified after over 1,000 guns found in Los Angeles mansion 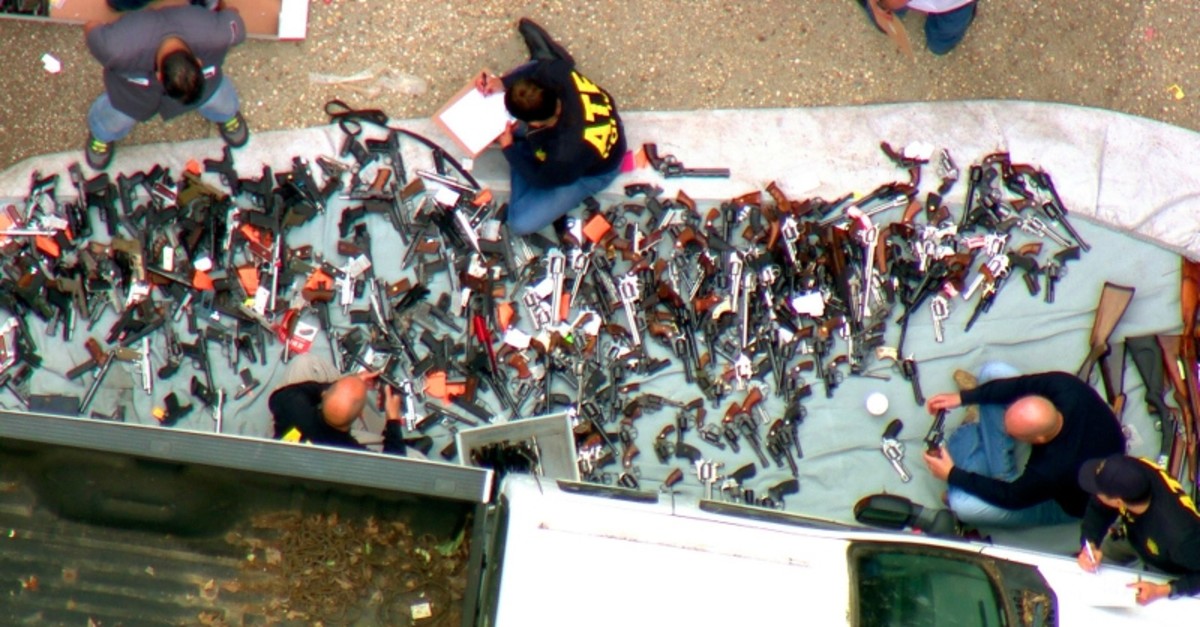 This photo from video provided by KCBS/KCAL-TV shows investigators from the U.S. Bureau of Alcohol, Tobacco, Firearms and Explosives and the police inspecting a large cache of weapons seized at a home in the affluent Holmby Hills area of Los Angeles
by May 09, 2019 10:05 pm

A 57-year-old man identified in court records as the longtime companion of Los Angeles real estate mogul Cynthia Beck was arrested Wednesday after authorities seized more than 1,000 guns from a home in Holmby Hills.

Girard Saenz was taken into custody on suspicion of unlawful transportation and of giving, lending or selling an assault weapon. He is being held in lieu of 50,000 dollars bail, according to the Los Angeles Police Department and court records.

57-year-old male suspect identified after over 1,000 guns found in Los Angeles mansion, being held in lieu of $50,000 bailhttps://t.co/aDndnA2occ pic.twitter.com/Q3NEOC1AQk

Authorities discovered the cache of weapons while serving a search warrant at the home in the 100 block of North Beverly Glen Boulevard at 4 a.m. Wednesday as part of a joint LAPD and Bureau of Alcohol, Tobacco, Firearms and Explosives investigation. Police launched the probe after they received an anonymous tip about a person manufacturing and selling guns at the home, said Officer Mike Lopez, an LAPD spokesman.

The Bel-Air mansion was described by authorities as a hoarder's paradise with guns strewn throughout the house. Court records show the property is owned by Cynthia Beck, who has three daughters with J. Paul Getty's son Gordon Getty. Beck bought the property in January 2001, but it remains unclear what, if any, connection she has to Wednesday's events. Beck could not be reached for comment.

Public records show Beck and Saenz together own several pieces of property in Los Angeles and an office building in San Francisco.

Saenz has been a licensed general building contractor since 1994 and operates a business called Gerry Saenz and Associates, according to public records. The business address is a home on North Bunker Hill Avenue in Los Angeles that he owns with Beck. That property was one of several locations that were searched by authorities Wednesday, law enforcement sources not authorized to speak publicly told The Times.

The ATF said in a statement that its agents searched the Holmby Hills home after discovering an individual was illegally selling firearms outside the scope of the federal license the person possesses.

Video of the raid shows what appear to be ATF officials reviewing the trove of guns stacked on the ground, examining boxes and taking photographs of evidence. Authorities said they also found a large amount of firearm-manufacturing equipment and tools.

As authorities investigated the scene Wednesday evening, tour vans full of customers passed by, taking tourists to see the nearby Playboy Mansion and other celebrity homes in the upscale area. Hip-hop power couple Jay-Z and Beyonce live in a mansion less than a mile from the site of Wednesday's raid.

Eventually, the stockpile of weapons - which included rifles, shotguns, assault weapons and pistols - was loaded into the back of a large box truck and driven off the property. The weapons will be itemized and booked into evidence, said Lt. Chris Ramirez, an LAPD spokesman.

"This is a big stash," Ramirez told reporters at the scene. "It's beyond comprehension that somebody can have so many weapons in a residence like this, in a neighborhood like this."