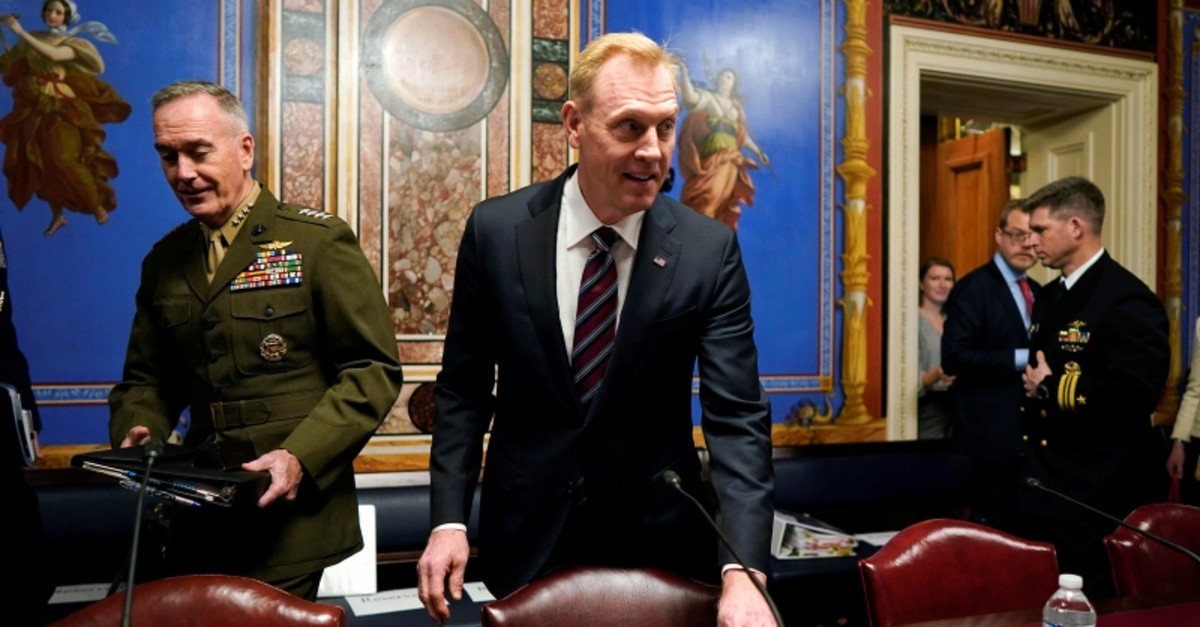 Acting Defense Secretary Patrick Shanahan arrives to testify before a Senate Appropriations Defense Subcommittee hearing on the proposed FY2020 budget for the Defense Department on Capitol Hill in Washington, U.S., May 8, 2019. (Reuters Photo)
by Associated Press May 09, 2019 11:31 pm

U.S. President Donald Trump will nominate Patrick Shanahan to be his second secretary of defense, the White House announced Thursday.

The former Boeing executive has been leading the Pentagon as acting secretary since Jan. 1, a highly unusual arrangement for arguably the most sensitive Cabinet position.

White House press secretary Sarah Sanders said "Shanahan has proven over the last several months that he is beyond qualified to lead the Department of Defense, and he will continue to do an excellent job."

Moments later, Shanahan spoke to reporters outside the Pentagon, saying he was very excited about the nomination and looking forward to a job he said requires him to "spin a lot of plates."

"The biggest challenge is balancing it all. For me it's about practicing selectful neglect, so that we can stay focused on the future," Shanahan said, adding with a grin, "I called my mom. She was super happy."

Indeed, in Shanahan's tenure at the department he's had to deal with a wide array of international hotspots, ranging from missile launches by North Korea to the sudden shift of military ships and aircraft to the Middle East to deal with potential threats from Iran.

The announcement comes close on the heels of an investigation by the Defense Department's inspector general over accusations that Shanahan had shown favoritism toward Boeing during his time as deputy defense secretary, while disparaging Boeing competitors. The probe appeared to stall his nomination, but the IG wrapped up the investigation rapidly and cleared Shanahan of any wrongdoing.

The IG interviewed Shanahan as well as 33 witnesses under oath, including Mattis and members of the Joint Chiefs of Staff.

"We did not substantiate any of the allegations. We determined that Mr. Shanahan fully complied with his ethics agreements and his ethical obligations regarding Boeing and its competitors," the report said.

Shanahan wields none of the star power of Trump's first defense secretary. And that may be just the thing for a commander in chief who seemed to resent Mattis for his reputation in Washington as a superior strategist and a moderating influence on an impulsive president.

Two months before Mattis resigned, citing policy differences, Trump publicly questioned whether he was "sort of a Democrat." After the former Marine general quit, Trump spoke more harshly, calling Mattis a failure, and insisted he had fired him, even though Mattis had resigned first.

Shanahan, 56, has a lifetime of experience in the defense industry but little in government. In more than four months as the acting secretary, he has focused on implementing the national defense strategy that was developed during Mattis' tenure and emphasizes a shift from the resources and tactics required to fight small wars against extremist groups to what Shanahan calls "great power" competition with China and Russia.

The Shanahan nomination is not known to face any organized opposition in Congress, although some members have been lukewarm on him. Sen. James Inhofe, the Oklahoma Republican who is chairman of the Senate Armed Services Committee, has questioned why Trump was taking so long to seek the Senate's consent but has indicated he would support Shanahan. Others have questioned whether Shanahan might be more willing to endorse plans or policies coming out of the White House.

This is only the third time in history that the Pentagon has been led by an acting chief. The last was William H. Taft, who served for two months in 1989 after President George H.W. Bush's first choice to be defense secretary, John Tower, became mired in controversy and ultimately failed to be confirmed by the Senate. Dick Cheney, the future vice president under President George W. Bush, then was nominated and confirmed.

Presidents typically take pains to ensure the Pentagon is being run by a Senate-confirmed official, given the grave responsibilities that include sending young Americans into battle, ensuring the military is ready for extreme emergencies like nuclear war and managing overseas alliances that are central to U.S. security.

Shanahan, who grew up in Seattle, earned a Bachelor of Science degree in mechanical engineering from the University of Washington and two advanced degrees from the Massachusetts Institute of Technology. He joined Boeing in 1986, rose through its ranks and is credited with rescuing a troubled Dreamliner 787 program. He also led the company's missile defense and military helicopter programs.

Trump has seemed attracted to Shanahan partially for his work on one of the president's pet projects — creating a Space Force. Trump also has publicly lauded Boeing, builder of many of the military's most prominent aircraft, including the Apache and Chinook helicopters, the C-17 cargo plane and the B-52 bomber, as well as the iconic presidential aircraft, Air Force One.

Although a few members of the Senate have rhetorically roughed up Shanahan, he has not generated broad opposition during his months of auditioning for the nomination. Sen. Lindsey Graham, a South Carolina Republican, butted heads with Shanahan over the administration's Syria policy, but that confrontation quickly faded after the White House partially reversed course by agreeing to keep a few hundred troops in Syria rather than withdrawing all 2,000.

Shanahan was the deputy secretary of defense during Mattis' two-year tenure. No one thought of him then as a potential No. 1 since he had never previously served in government and carried little political sway in Washington or in foreign capitals. Aides say that during his 17 months as deputy, Shanahan was deeply engaged in the full range of policy issues and briefed on military operations. He shares Mattis' conviction that the Pentagon needs to shift its focus from fighting insurgent wars to preparing for and deterring armed conflict with big powers like China.

"China, China, China," was his message to senior department officials the day he took over from Mattis, aides said.