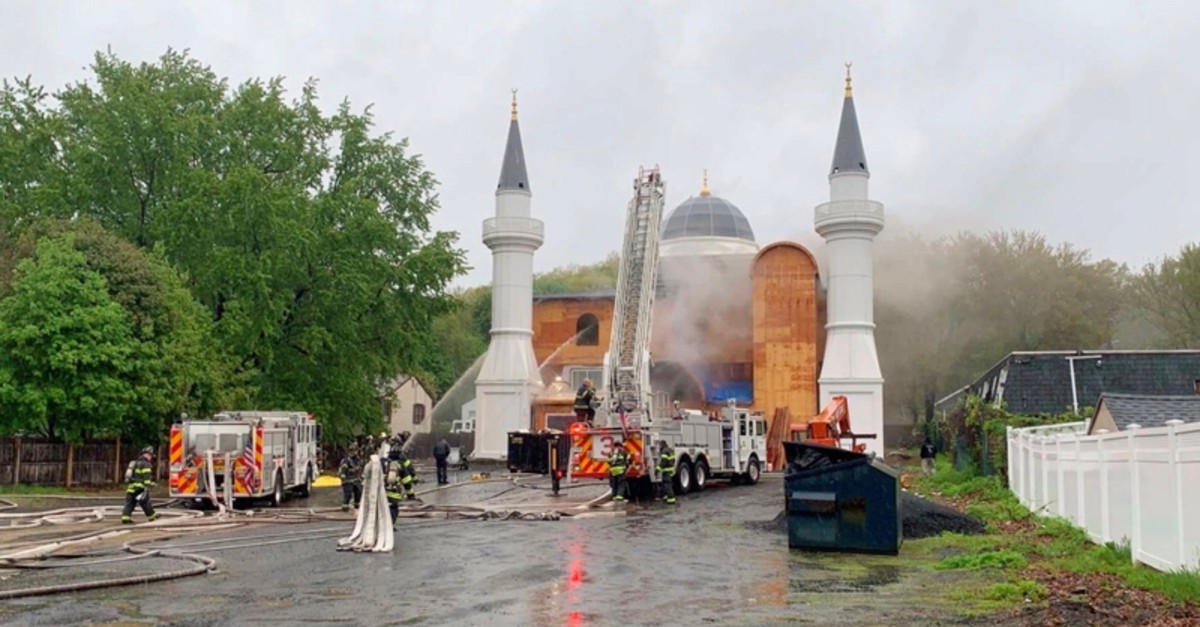 The Muslim world was shaken by yet another anti-Muslim attack that took place during the holy month of Ramadan and this time a Turkish mosque in the U.S. state of Connecticut was the target.

In a statement, the Religious Services Attache of the Turkish Consulate General in New York said an investigation is underway into the fire at Diyanet Mosque in the city of New Haven and efforts are continuing to catch the perpetrators.

The fire occurred around 4 p.m. Sunday, the seventh day of Ramadan, a holy month during which Muslims fast and pray. Fasting is one of the five pillars of the religion of Islam.

A reward of up to $2,500 has been offered for any information that leads to the arrest or conviction of the perpetrators, according to officials.

The statement said the fire started at the mosque's entrance and reached the third floor through the exterior side of the building.

"There was no loss of life or injury in the fire, but it is determined that the mosque has suffered large-scale damage. Tons of water used to put out the fire [also] caused damage to the building's unburnt part," it said.

The incident saddened the Turkish community in the United States, primarily in New Haven, the statement added.

Ankara: Perpetrators of attack should be sentenced swiftly

Turkish Foreign Minister Mevlüt Çavuşoğlu called the arson "heinous" and said the perpetrators should be identified and "sentenced swiftly."

"Arson in Diyanet Mosque in #NewHaven during Ramadan is another example of increasing #Islamophobia in the world. No loss of life is our only consolation," said Çavuşoğlu.

The minister also called for a united stance against Islamophobia and racism.

Presidential advisor Ibrahim Kalın also said Tuesday that the attack was the latest manifestation of "growing Islamophobia and anti-Muslim hatred."

"The discriminatory and racist climate that feeds it is a major threat to global peace and likely to lead to new attacks. Serious action is needed now," Kalın said on Twitter.

Turkey's ruling Justice and Development Party (AK Party) spokesman Ömer Çelik also reacted to the attack in a tweet Tuesday saying hate does not have borders.

Çelik said the ideology of hatred is currently targeting mosques but will gradually spread to all sanctuaries.

"Those who treat Islam as an enemy poison all values of humanity," he stressed.

This anti-Muslim act in the country is not the first one as Muslims in the U.S. were the target of nearly 19 percent of religiously motivated hate crimes, according to FBI data released in 2018.

A criminal investigation is underway, and officials believe the fire was intentionally set. Besides local police, the FBI and Bureau of Alcohol, Tobacco, Firearms and Explosives (ATF) are also involved.

The mosque attack in Connecticut has become the latest example of growing numbers of anti-Muslim attacks in the Western countries.

Anti-Muslim hatred has been on the rise for years. Far-right extremism and xenophobia have fueled anti-Muslim hatred in Western countries, where terror attacks by Daesh and al-Qaida are used as an excuse to legitimize those views.

Although, the enmity toward Muslims is not a new phenomenon, it became more intensified after 2001 when airplanes crashed into the twin towers in New York City. Since then, for almost two decades, Islam has been unjustly tarnished with labels that have negative connotations, and portrayed as a religion of hate, violence, anti-Western sentiment and women's oppression. This trend of intolerance has triggered deadly attacks against Muslims and immigrants since then.

On March 15, 50 people were killed and about as many wounded when a terrorist opened fire on worshipers during Friday prayers at the Al Noor and Linwood mosques in Christchurch, New Zealand's third-largest city.

The massacre was livestreamed on social media and was accompanied by the release of a racist, anti-Muslim manifesto that also attacked Turkey.

Anders Breivik, the Norwegian far-right political terrorist who killed eight people with a van bomb in Oslo before shooting dead 69 participants of a Labour Party Youth League summer camp on Utoya Island in 2011, became an inspiration for many future attacks including the New Zealand terrorist attacks since then. During the following terrorist attacks, hundreds of people lost their lives in Western countries.

In Sweden, a masked swordsman killed two and wounded another at the Kronan School in Trollhattan, on Oct. 22, 2015. The perpetrator chose the school as his target due to its high immigrant population. It was the deadliest attack on a school in Swedish history. A teacher who was stabbed during the incident succumbed to his wounds on Dec. 3, 2015, raising the death toll to three.

On July 22, 2016, 10 people, including the perpetrator, were killed and 36 others injured during a mass shooting in the vicinity of the Olympia shopping mall in the Moosach district of Munich, Germany. The perpetrator expressed his admiration for Germany's right-wing Alternative for Germany (AfD) party, and that he was "very nationalistic," repeatedly uttering anti-Turkish abuse.

In Switzerland, a man yelling "get out of our country," opened fire on people at an Islamic center in Central Zürich on Dec. 19, 2016. The Islamic Central Council of Switzerland issued a statement suggesting it should serve as an "alarm" regarding the threat posed by increasing Islamophobia in Swiss society.

On Jan. 29, 2017, a mass shooter killed six people and injured 19 at the Islamic Cultural Centre of Quebec City, Canada. Prime Minister Justin Trudeau and Premier Philippe Couillard called the shooting a terrorist attack, but the perpetrator was not charged with terrorism. The incident was classified as a hate crime and an anti-Muslim attack.

A man fatally stabbed two people and injured a third on a MAX Light Rail train in Portland in the United States on May 26, 2017. He was confronted for reportedly "yelling a gamut of anti-Muslim and anti-everything slurs." The Portland Police Bureau's report said the man was shouting "hate speech toward a variety of ethnicities and religions," and directed his inflammatory remarks at two young Muslim women, one of whom was wearing a hijab.

In the U.K., a man drove into a crowd of Muslim worshipers leaving a mosque in London after prayer on June 19, 2017. The incident, in which a person was killed and 11 others were injured, was deemed terrorism. Several civil rights groups and politicians claimed the perpetrator was motivated by anti-Muslim ideologies.

It was also reported that a donation campaign was launched for the Diyanet Mosque.

As the Diyanet Center of America (DCA) announced on its website, a charity campaign for the restoration of the attacked mosque has been launched under the name "Support the New Haven Mosque."

The DCA is the operating name of the Turkish American Community Center (TACC), a nonprofit organization located in Lanham, Maryland. The community center was established in 1993 by a group of Turkish-Americans to provide religious, social and educational services to Turkish immigrants and Muslims living in the United States. As an umbrella organization, the DCA has 22 local chapters with affiliations across the U.S. and works in full coordination with the Religious Affairs of the Republic of Turkey.

Fatih Kanca, chairman of the DCA, called on everyone who has a conscience to support the restoration of the Diyanet Mosque.

While the damage to the mosque totaled more than $500,000, the priority is to collect $100,000 during the first phase of the donation campaign until the official investigation is completed.

Commenting on the attack, Connecticut Gov. Ned Lamont described the attack on the religious institution as "disgusting" and "appalling."

"There is no place for it in our state or our nation. We will work w/ our local counterparts in #NewHaven to assist in the investigation and ensure those responsible are held accountable," he said on Twitter.