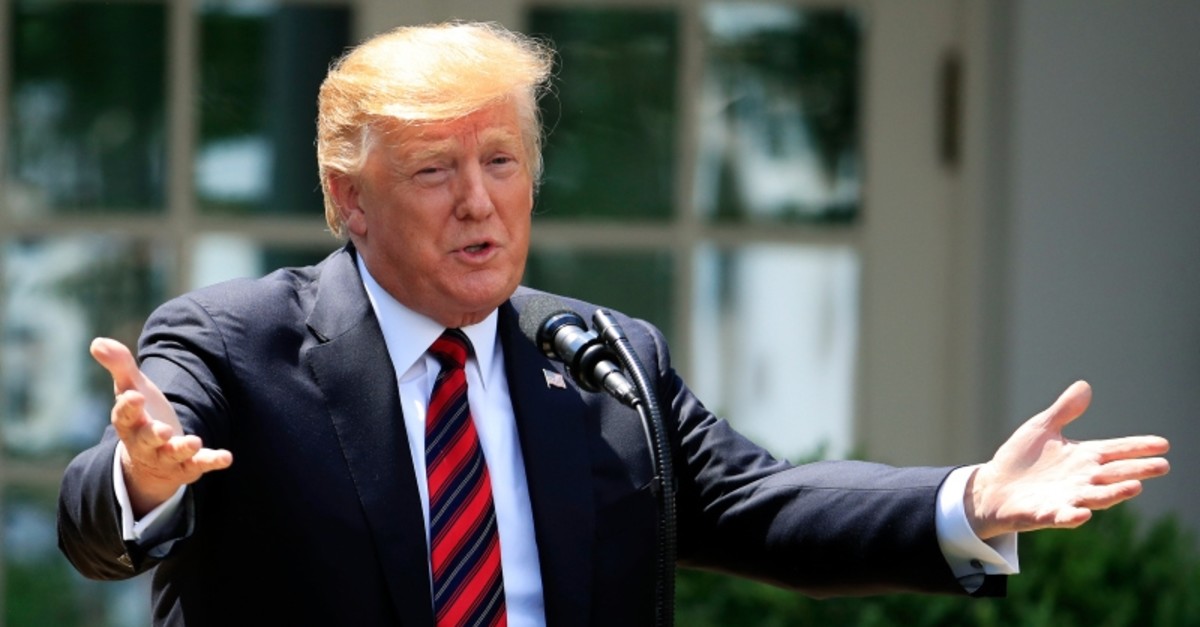 President Donald Trump speaks about modernizing the immigration system in the Rose Garden of the White House, Thursday, May 16, 2019, in Washington. (AP Photo)
by French Press Agency - AFP
May 17, 2019 12:06 am

The reforms, announced in a Rose Garden speech, would be the first major change to the system in decades and would fundamentally pivot away from the U.S. tradition of welcoming "your poor, your huddled masses," as the poem inscribed on the Statue of Liberty puts it.

However, there was little chance that the business-minded Republican president's ideas will get anywhere in Congress, where immigration is seen as a politically toxic subject, particularly ahead of 2020 legislative and presidential elections.

For Trump, who has made building security walls on the Mexican border a keystone of his first term, the proposals will feed straight into his re-election campaign.

He said the plan would make U.S. immigration "the envy of the modern world" by attracting the highly qualified, in line with what he said were the more competitive policies used by Australia and Canada.

"We cherish the open door that we want to create for our country. But a big proportion of those immigrants must come in through merit and skill," he said.

"The biggest change we make is to increase the proportion of highly skilled immigration from 12% to 57%, and we'd like to even see if we can go higher," Trump said.

Under the proposed reforms, immigrants will also be "required to learn English and to pass a civics exam prior to admission," Trump said.

The U.S. president also took aim at what he said were abuses of the country's asylum system, which is struggling to cope with large numbers of Central Americans who say they are fleeing gang violence in some of the world's most lethal countries.

"Our nation has a proud history of affording protection to those fleeing government persecutions," Trump said. "Unfortunately, legitimate asylum seekers are being displaced by those lodging frivolous claims."

Trump's ideas are so unlikely to get a vote in Congress that analysts see his policy splash as more of a campaign speech than a serious bid to get legislation enacted.

For politicians on the right, Trump's plan fails because it does not seek to diminish overall immigration numbers. On the left, it is dead on arrival because it ignores a drive to give legal status to people brought into the country illegally as young children, known as "Dreamers."

Cornell University Law School professor Stephen Yale-Loehr, an immigration expert, said Trump's proposal "has some ideas worth considering," but is so incomplete in addressing the broader complications in the system that Congress will not take it seriously.

As Yale-Loehr noted, immigration reform has bedeviled Washington for years and is even less likely to see progress in Congress ahead of elections.