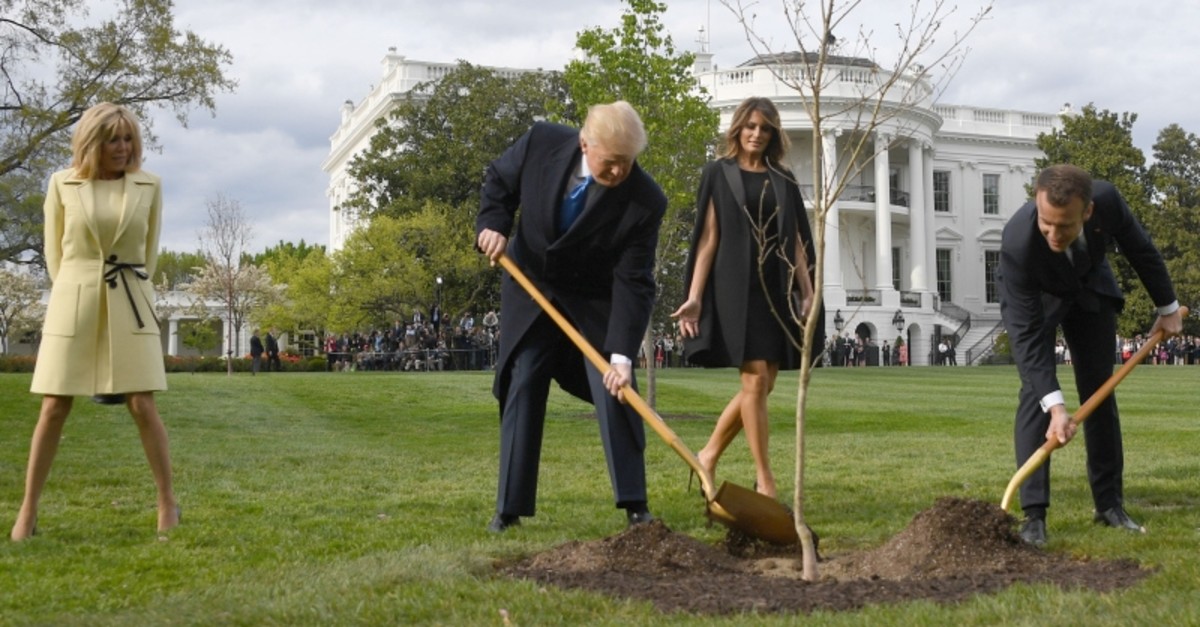 In this file photo taken on April 23, 2018 US President Donald Trump and French President Emmanuel Macron plant a tree watched by Trump's wife Melania and Macron's wife Brigitte on the grounds of the White House in Washington, D.C. (AFP Photo)
by Daily Sabah with Wires Jun 10, 2019 11:14 am

The oak tree given as a gift by French President Emmanuel Macron and planted at the White House as a symbol of their countries' ties has not survived, according to reports.

The photo of the U.S. President Donald Trump and his French counterpart Macron planting an oak tree in the garden of the White House symbolized the friendship shown by the two leaders. But relations between them have since frayed over issues ranging from Iran to trade, and the tree, a diplomatic source said this week, has died.

The French president offered the young oak to Trump on the occasion of a state visit to Washington in 2018, and the two shoveled dirt around it under the watchful eyes of their wives, and cameras from around the world. It was a symbolic gesture: the tree came from a northern French forest where 2,000 U.S. Marines died during World War I. But a few days later, the tree was nowhere to be seen, having disappeared into quarantine.

"It is a quarantine which is mandatory for any living organism imported into the U.S.," Gerard Araud, the French ambassador to America at the time, wrote on Twitter, adding that it would be replanted later. But it was never replanted: the tree died during its quarantine, the diplomatic source said.

Relations between the Western allies are under particular stress in the face of Trump's persistent attacks. Trump joined a host of other world leaders in northern France last, as well as thousands of well-wishers, to pay tribute to the ever-dwindling number of veterans of the 1944 D-Day landings that turned the course of World War II. Speaking to press during commemorations, Trump assured them that the U.S. relationship with France were "outstanding."

"It's been good and sometimes it hasn't been, but it's outstanding right now," Trump said, citing military cooperation such as the campaign against the Daesh terrorist group in Syria and Iraq.

The talks had been "extremely positive" and constructive and showed that there was "room for maneuver" even on topics where the two leaders had high-profile disagreements, a source in Macron's office said afterwards.