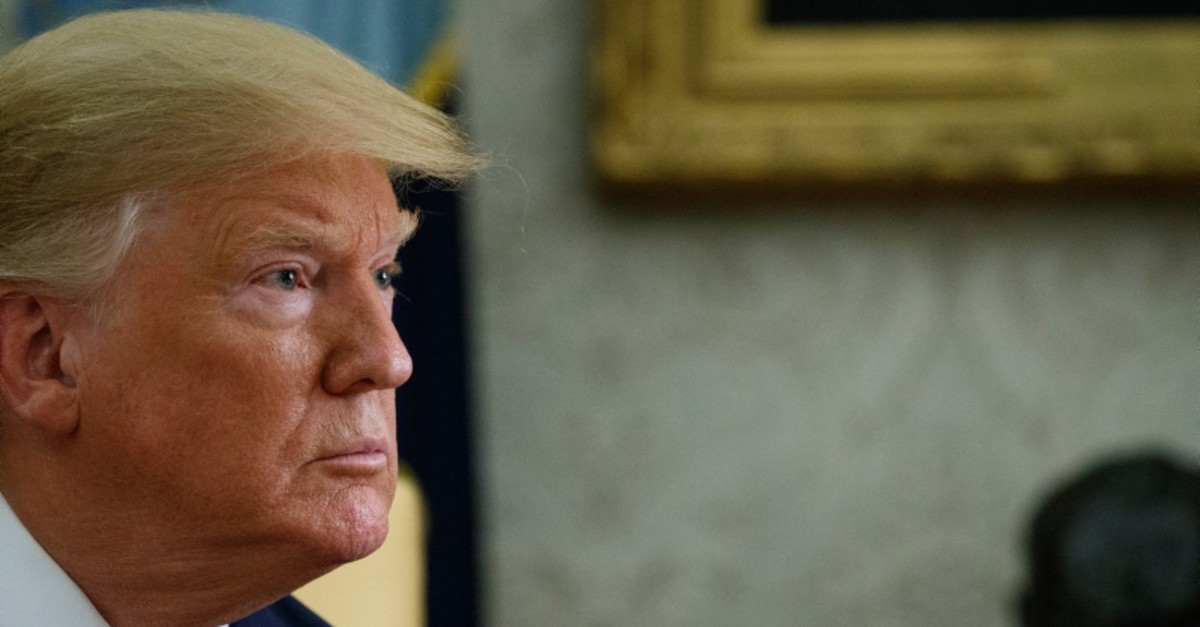 U.S. President Donald Trump listens to a question during a meeting with Polish President Andrzej Duda in the Oval Office of the White House, Wednesday, June 12, 2019, in Washington. (AP Photo)
by reuters Jun 13, 2019 7:12 pm

Democratic lawmakers and a senior Republican on Thursday condemned U.S. President Donald Trump for saying he would accept a foreign government's help in the 2020 presidential race as he dug in and said it would be "ridiculous" to report his foreign contacts to the FBI.

In a ABC television interview aired Wednesday, Trump said he would listen if a foreign government or person offered damaging information about political opponents as he seeks re-election.

Trump's remarks to ABC drew outrage from Democratic lawmakers and presidential candidates seeking to challenge Trump in 2020, as well as one of Trump's leading Republican allies.

"What the president said last night shows clearly, once again, over and over again, that he does not know the difference between right and wrong," said U.S. House Speaker Nancy Pelosi, the top Democrat in Congress. "There is no sense ... any ethical sense that informs his comments and his thinking."

The remarks prompted some Democratic presidential candidates to renew their call to impeach the president. However, Pelosi said Trump's comments did not change Democratic leaders' plan to move forward with investigating Trump and his administration before any formal impeachment proceedings.

"I think it's a mistake," said, Senator Lindsey Graham, chairman of the Senate Judiciary Committee.

He also accused Democrats of having accepted damaging information from foreign nationals on political opponents and said any public official contacted by a foreign government with an offer of help to their campaign should reject the offer and inform the FBI.

Any foreign contribution of "money or other thing of value" violates U.S. campaign finance law. Legal experts say knowingly soliciting information from a foreign entity would also be illegal.

Mueller, whose investigation examined a 2016 meeting at Trump Tower that Trump's campaign had with Russians promising dirt on Clinton, did not charge Trump's associates who attended the meeting.

Trump defended his remarks in a flurry of tweets on Thursday morning, saying he talks with foreign governments daily, not addressing the issue of accepting political dirt on his opponents. "Should I immediately call the FBI about these calls and meetings? How ridiculous!"

"The president has either learned nothing in the last two years or picked up exactly the wrong lesson — that he can accept gleefully foreign assistance again and escape the punishment of the law," U.S. Representative Adam Schiff said.

"The President has given Russia the green light to interfere in the 2020 election," Democratic Senator Mark Warner tweeted.

Former Vice President Joe Biden, who leads the Democratic 2020 race so far, said on Twitter: "This isn't about politics. It is a threat to our national security."

"A foreign government attacked our 2016 elections to support Trump, Trump welcomed that help, and Trump obstructed the investigation. Now, he said he'd do it all over again. It's time to impeach Donald Trump," Warren wrote in a Twitter post.