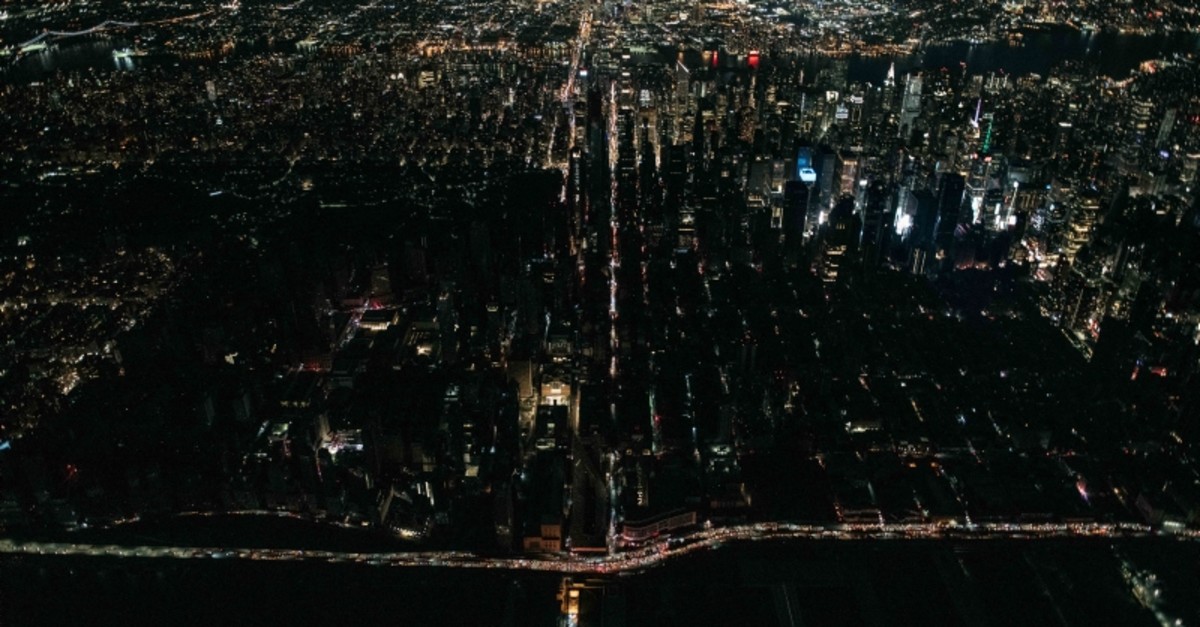 A large section of Manhattan's Upper West Side and Midtown neighborhoods are seen in darkness from above during a major power outage on July 13, 2019 in New York City. (Scott Heins/Getty Images/AFP)
by Associated Press Jul 14, 2019 11:55 am

A power outage crippled the tourist-filled heart of Manhattan just as Saturday night Broadway shows were set to go on, sending theater-goers spilling into siren-filled streets, knocking out Times Square's towering electronic screens and bringing subway lines to a near halt.

Electricity was restored to customers and businesses in midtown Manhattan and the Upper West Side by about midnight.

Con Edison CEO John McAvoy said a problem at a substation caused the power failure at 6:47 p.m., affecting 73,000 customers for more than three hours along a 30-block stretch from Times Square to 72nd Street and Broadway, and spreading to Rockefeller Center.

McAvoy said the exact cause of the blackout would not be known until an investigation is completed.

The temperature was in the low 80s as the sun set, but not as steaming as Manhattan can get in July, challenging the city's power grid.

Power went out early Saturday evening at much of Rockefeller Center, reaching the Upper West Side and knocking out traffic lights.

A big cheer went up among Upper West Side residents when power flickered back on at about 10:30 p.m. For hours before that, doormen stood with flashlights in the darkened entrances of upscale apartment buildings along Central Park West, directing residents to walk up flights of stairs to their apartments, with all elevators out.

Police directed traffic at intersections as pedestrians and bikes weaved through the dark.

The outage comes on the anniversary of the 1977 New York City outage that left most of the city without power.

Gov. Andrew Cuomo said in a statement that although no injuries were reported "the fact that it happened at all is unacceptable." He said the state Department of Public Service will investigate.

He said the outage poses a safety risk.

"You just can't have a power outage of this magnitude in this city" Cuomo said. "It is too dangerous, the potential for public safety risk and chaos is too high, we just can't have a system that does that, it's that simple at the end of the day."

Most Broadway musicals and plays canceled their Saturday evening shows, including "Hadestown," which last month won the Tony Award for best musical. Several cast members from the musical "Come From Away" held an impromptu performance in the street outside the theater for disappointed audience members.

Emily Totero, 30, planned to bring out-of-town guests to see "Moulin Rouge." But once they got to the theater district, they saw the power go out.

"You could see all the theater lights across the street, all the marquees went out. That's what we noticed first," she said.

The outage also hit Madison Square Garden, where Jennifer Lopez was performing Saturday night. Attendees said the concert went dark about 9:30 p.m. in the middle of Lopez's fourth song of the night. The arena was later evacuated. And at Penn Station, officials were using backup generators to keep the lights on.

Both Carnegie Hall and the Lincoln Center for the Performing Arts were evacuated.

When the lights went out early Saturday evening, thousands of people streamed out of darkened Manhattan buildings, crowding Broadway next to bumper-to-bumper traffic amid emergency vehicle sirens and honking car horns.

People in the neighborhood commonly known as Hell's Kitchen began directing traffic themselves as stoplights and walking signs went dark.

Ginger Tidwell, a dance teacher and Upper West Side resident, was about to order at a West Side diner on Broadway and West 69th Street just before 7 p.m.

"When the lights started flickering, and then were out, we got up and left, walking up Broadway with all the traffic lights out and businesses dark," she said.

But once they got to West 72nd Street, they found another diner that was open and had power.

"It was still sunny and everyone just came out to the street because they lost power and air conditioning; it was super-crowded," she said. "Everyone was hanging out on the street on a nice night. All you could hear was firetrucks up and down Broadway. All of Broadway was without traffic lights."

Underground, the entire subway system was affected. Maxwell Young, a spokesman for the Metropolitan Transportation Authority, said four Manhattan stations were closed to the public — at Columbus Circle, Rockefeller Center, Hudson Yards and Fifth Avenue at 53rd Street. But he said train operators were able to manually change the signals and bring at least one car into stations so passengers could get off.

Karen Janowsky, a vendor selling ponchos at a street fair on Sixth Avenue in Rockefeller Center, got caught in the blackout just as she was wrapping up for the day and taking some of the goods to her car parked in a garage two blocks away on West 49th Street. That kept her from driving her car to get the tables, chairs and racks — all gone before she could rush back to get them

"I was alone and I couldn't get to everything, so they stole my stuff," she said, adding that she had no idea who the people who took her things may have been. "It was chaos, with fire engines and people packing the streets. When the lights went out, I was one minute from getting my car in the garage."

She lost about $400 worth of setup equipment for her goods.

"I've been stranded for the last three hours," Janowsky. "I have another fair tomorrow, and I don't know what I'm going to do."