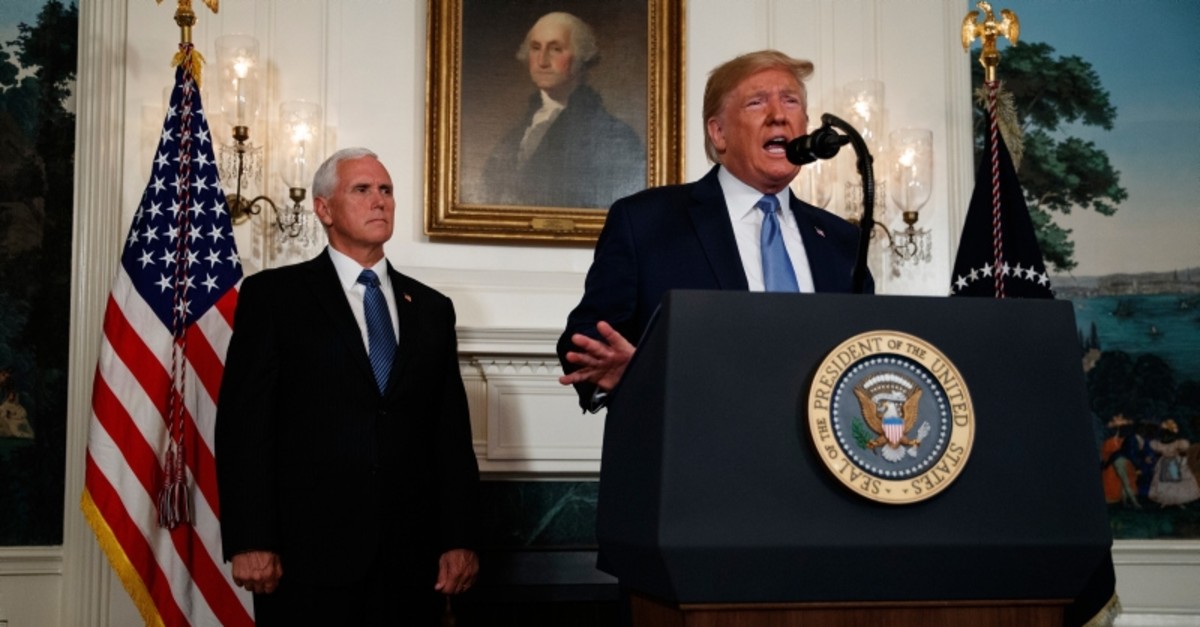 President Donald Trump on Monday condemned weekend shootings in Texas and Ohio as barbaric crimes "against all humanity" and called for bipartisan cooperation to respond to an epidemic of gun violence.

Trump said he wants legislation providing "strong background checks" for gun users, but he provided scant details and has reneged on previous promises after mass shootings.

"We vow to act with urgent resolve," Trump said Monday.

Trump spoke Monday from the White House about shootings that left 29 dead and dozens wounded. He suggested early on Twitter that a background check bill could be paired with his long-sought effort to toughen the nation's immigration system. But he didn't say how or why he was connecting the issues. Both shooting suspects were U.S. citizens, and federal officials are investigating anti-immigrant bias as a potential motive for the El Paso, Texas, massacre.

On Saturday in El Paso, Texas, a gunman opened fire in a Walmart retail store in what authorities are treating as a case of domestic terrorism. The suspect, 21-year-old Patrick Crusius, was taken into custody after 20 people were killed and 26 others were injured. Just minutes before the tragedy a racist essay was posted to the online 8chan website titled, "The Inconvenient Truth," tht railed against an alleged "Hispanic invasion of Texas," and assails "race-mixing" while pledging an imminent attack. He made references to the Christchurch shootings in New Zealand, where a white gunman killed 51 mosque worshippers in March.

"I am simply defending my country from cultural and ethnic replacement brought on by an invasion," it said. "This is just the beginning of the fight for America and Europe. I am honored to head the fight to reclaim my country from destruction."

The Walmart shopping complex is located just minutes from the U.S.-Mexico border, and many of the victims were Latinos, including seven Mexican nationals. El Paso Police Chief Greg Allen said investigators are attributing the writing to Crusius.

"In one voice, our nation must condemn racism, bigotry and white supremacy," Trump said, adding that he had directed the FBI to examine steps to identify and address domestic terrorism. "These sinister ideologies must be defeated. Hate has no place in America. Hatred warps the mind, ravages the heart, and devours the soul," he said.

Trump has frequently sought to tie his immigration priorities — a border wall and transforming the legal immigration system to one that prioritizes merit over familial ties — to legislation around which he perceives momentum to be building.

Trump has repeatedly come under criticism for the anti-immigrant rhetoric he regularly employs. He started his 2016 White House bid by referring to Mexican migrants as rapists and murderers, and after assuming office has referred to immigrants as "invaders" and stoked alarm over a "flood" crossing the U.S.'s southern border illegally.

"The Mayor of Tijuana, Mexico, just stated that 'the City is ill-prepared to handle this many migrants, the backlog could last 6 months.' Likewise, the U.S. is ill-prepared for this invasion, and will not stand for it. They are causing crime and big problems in Mexico. Go home!" Trump wrote on Twitter last Novemner as a largely central American group of migrants fleeing poverty and rampant crime headed to the U.S.

"More troops being sent to the Southern Border to stop the attempted Invasion of Illegals, through large Caravans, into our Country. We have stopped the previous Caravans, and we will stop these also. With a Wall it would be soooo much easier and less expensive. Being Built!" he tweeted in January.

As recently as June he wrote: "People have been saying for years that we should talk to Mexico. The problem is that Mexico is an 'abuser' of the United States, taking but never giving. It has been this way for decades. Either they stop the invasion of our Country by Drug Dealers, Cartels, Human Traffickers Coyotes and Illegal Immigrants, which they can do very easily, or our many companies and jobs that have been foolishly allowed to move South of the Border, will be brought back into the United States through taxation (Tariffs). America has had enough!"

Trump halted the tariff threat after Mexico agreed to take several measures to tighten its northern border and curb migrant flows through the country.

Following the El Paso attack, Trump came under renewed criticism for his rhetoric.

Asked what Trump could do to make things better, congressman Beto O'Rourke, who is running for the Democratic presidential nomination alongside Castro, slammed the question.

"What do you think? You know the sh** he's been saying. He's been calling Mexican immigrants rapists and criminals. I don't know, like, members of the press, what the f**k?" O'Rourke, whose hometown is El Paso, said. "Connect the dots about what he's been doing in this country. He's not tolerating racism. He's promoting racism and violence in this country."

Trump called for law enforcement and social media companies to do more to combat extremism and spot warning signs of violence online. He also called for a reduction in the "glorification" of violence in American culture, laws to make it easier to commit those with mental illness and "red flag laws" to separate such individuals from firearms.

On the other side of the border, Mexican President Andres Manuel Lopez Obrador on Monday called on the U.S. to adopt stricter arms control.

"We very much respect what other governments decide, but we think the unfortunate events that occurred in the United States should lead to reflection, analysis and the decision to control the indiscriminate sale of weapons," Lopez Obrador said at his daily press conference.

"In the two main parties of the United States, there has been little attention to gun control," he added, in a reference to the Republicans and Democrats.

"These are new times, it is necessary to always be adjusting the legal framework to the new reality," he said. "I hope this happens."

The problem affects Mexico as well as the U.S., the president said. About 70 percent of the weapons used in criminal acts in Mexico are brought in across the northern border, according to government data. Mexico registered a record 35,000 killings last year. Trump, in his address, sent condolences to the Mexican president and the Mexican people after the shooting.

Foreign Minister Marcelo Ebrard is due to travel to El Paso on Monday to lend support to the injured victims, seven of whom were Mexicans, and to the victims' family members.

Trump also directed the Department of Justice to seek and prioritize the enforcement of the death penalty in cases of hate crimes and mass shootings.

Over the weekend, Trump tried to assure Americans he was dealing with the problem and defended his administration in light of criticism following the latest in a string of mass shootings.

"We have done much more than most administrations," he said, without elaboration. "We have done actually a lot. But perhaps more has to be done."

Congress has proven unable to pass substantial gun violence legislation this session, despite the frequency of mass shootings, in large part because of resistance from Republicans, particularly in the GOP-controlled Senate. That political dynamic seems difficult to change.

And Trump himself has reneged on previous pledges to strengthen gun laws.

After other mass shootings he called for strengthening the federal background check system, and in 2018 he signed legislation to increase federal agency data sharing into the system. But he has resisted Democratic calls to toughen other gun control laws.

At a February meeting with survivors and family members of the 2018 Parkland, Florida, school shooting in which 17 people died, Trump promised to be "very strong on background checks."

Trump claimed he would stand up to the gun lobby and finally get results in quelling gun violence. But he later retreated, expressing support for modest changes to the federal background check system and for arming teachers.

In the El Paso attack, investigators are focusing on whether it was a hate crime after the emergence of a racist, anti-immigrant screed that was posted online shortly beforehand. Detectives sought to determine if it was written by the man who was arrested. The border city has figured prominently in the immigration debate and is home to 680,000 people, most of them Latino.

On Twitter Monday, Trump seemed to deflect from scrutiny over the manifesto, which had language mirroring some of his own. As Democrats have called on Trump to tone down his rhetoric, Trump blamed the news media for the nation's woes.

"Fake News has contributed greatly to the anger and rage that has built up over many years," he claimed.

As Trump weighs trips to the affected communities — the Federal Aviation Administration advised pilots of a presidential visit Wednesday to El Paso and Dayton, Ohio — local lawmakers signaled opposition to his presence.

Rep. Veronica Escobar, a Democrat who represents El Paso, said Trump is "not welcome" to visit the city.

In recent weeks, the president has issued racist tweets about four women of color who serve in Congress, and in rallies has spoken of an "invasion" at the southern border. His reelection strategy has placed racial animus at the forefront in an effort that his aides say is designed to activate his base of conservative voters, an approach not seen by an American president in the modern era.

Trump also has been widely criticized for offering a false equivalency when discussing racial violence, notably when he said there were "very fine people, on both sides," after a white supremacist rally in Charlottesville, Virginia, that resulted in the death of an anti-racism demonstrator.

On gun control, a majority of Americans have consistently said they support stronger laws, but proposals have stalled repeatedly in Congress, a marked contrast to some countries that have acted swiftly after a mass shooting.

In March, a poll conducted by The Associated Press-NORC Center for Public Affairs Research found a majority of Americans favor stricter gun laws. The survey was conducted both before and after a mass shooting at two mosques in New Zealand. It found that 67 percent of Americans support making US gun laws stricter, while 22 percent say they should be left as they are and 10 percent think they should be made less strict.

Less than a week after the mosque shootings, New Zealand moved to ban "military-style" semi-automatic weapons and high-capacity magazines; similarly, after a mass shooting in 1996, Australia enacted sweeping gun bans within two weeks.

The poll suggested many Americans would support similar measures, but there's a wide gulf between Democrats and Republicans on banning specific types of guns. Overall, 6 in 10 Americans support a ban on AR-15 rifles and similar semi-automatic weapons. Roughly 8 in 10 Democrats, but just about 4 in 10 Republicans, support that policy.