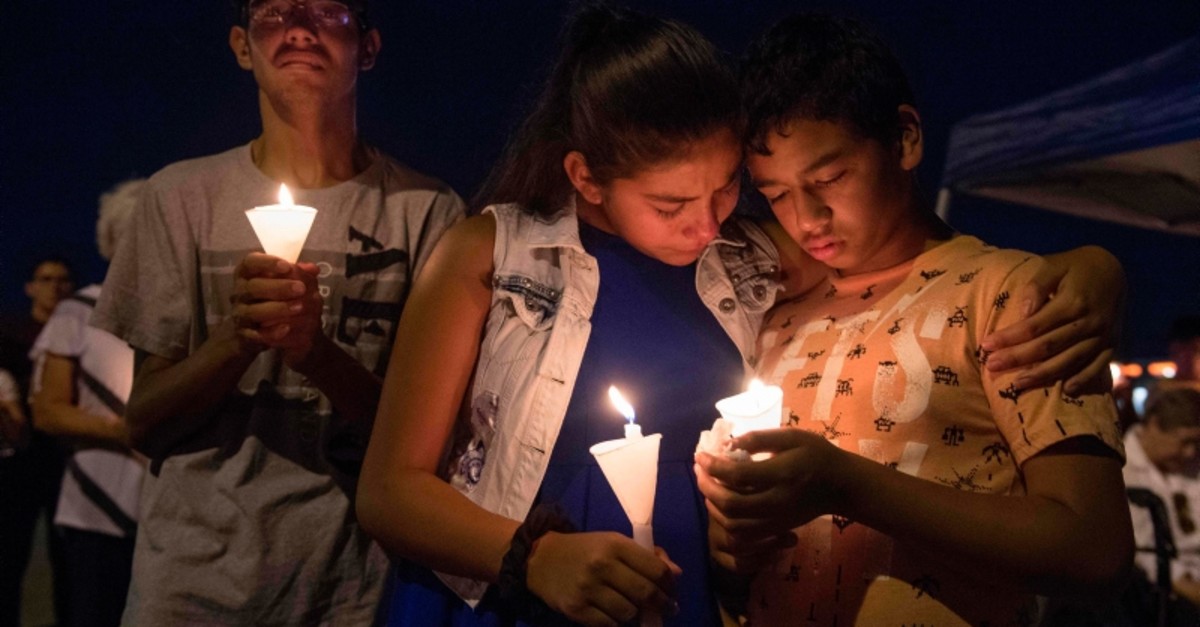 People hold candles as they pray during a candlelight vigil at the Immanuel Church for victims of a shooting that left a total of 22 people dead at the Cielo Vista Mall WalMart in El Paso, Texas, on Aug. 5, 2019. (AFP Photo)
by Daily Sabah Aug 06, 2019 11:52 am

Governments are issuing travel warnings for their citizens planning trips to the United States, cautioning them to avoid areas at risk of mass shootings.

In the hours following two mass shootings that left 31 dead in Texas and Ohio, Uruguay and Venezuela issued statements alerting travelers to the U.S. of potentially dangerous public areas, including shopping malls, fairs and events. Japan extended that warning to "everywhere in the United States."

The Japanese Consul in Detroit issued an alert on Sunday that warned Japanese citizens to "be aware of the potential for gunfire incidents everywhere in the United States," describing the U.S. as a "gun society," according to the Los Angeles Times.

Uruguay's Foreign Ministry on Monday warned "compatriots traveling to the United States to take precautions against growing indiscriminate violence, most of which are hate crimes, including racism and discrimination."

The statement said prevention of these attacks is an "impossibility" due in part to "indiscriminate possession of firearms by the population."

"It is especially advisable to avoid places where large concentrations of people occur, such as theme parks, shopping centers, art festivals, religious activities, gastronomic fairs and any kind of cultural or sporting events. In particular, it is recommended not to go with minors to these places," the statement said.

The Foreign Ministry also recommended Uruguayan nationals certain avoid high-risk cities, which it listed as among the most dangerous in the world, including Detroit, Michigan and Baltimore, Maryland.

The government of Venezuela issued a statement Monday suggesting its citizens "postpone travel" or at least take precautions "given the proliferation of acts of violence and crimes of indiscriminate hatred."

"These growing acts of violence have found echo and sustenance in the speeches and actions impregnated with racial discrimination and hatred against migrant populations, pronounced and executed from the supremacist elite who hold political power in Washington," the statement said.

Mexico's government has sprung into action after seven Mexican citizens were among 22 killed at a Walmart store in El Paso, Texas. The 21-year-old white male suspect reportedly drove from Dallas to the border city to target Latinos.

"We consider this an act of terrorism against the Mexican-American community and Mexican nationals in the United States," Foreign Minister Marcelo Ebrard said Sunday, noting that Mexico City will seek the extradition of the terrorist and take legal action against the firm or individual who sold him the assault weapon.

Police said Monday that one of the victims in the El Paso shooting was a German national.

Within 24 hours of the Walmart terror attack, nine people were shot dead by a 24-year-old white male on a busy street in Dayton, Ohio.

The advisories issued Sunday and Monday are not the first to address the gun-related safety risks travelers to the U.S. face. Turkey, France, New Zealand and Germany have previously issued alerts about mass shootings.