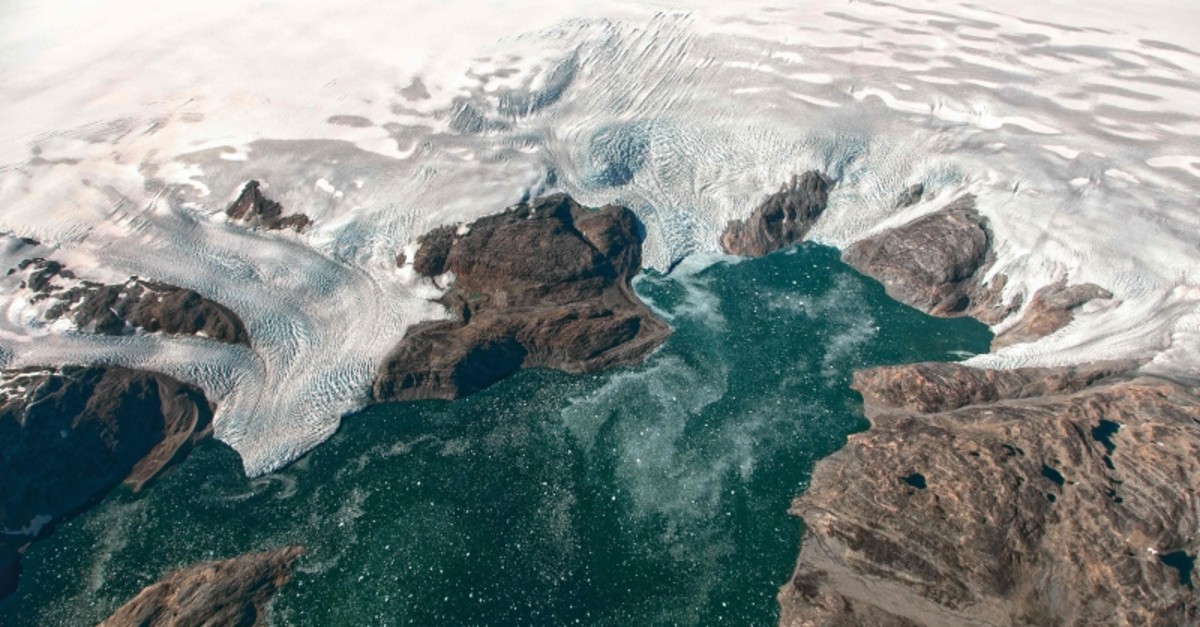 This NASA Earth Observatory file photo taken on September 22, 2016 and observed from the HU-25A Guardian aircraft shows the Bruckner and Heim glaciers where they flow into Johan Petersen Fjord in southeastern Greenland. (AFP Photo)
by Compiled from Wire Services Aug 16, 2019 10:40 am

President Donald Trump is asking advisers if it is possible for the U.S. to buy Greenland, according to a report.

Trump has expressed interest in the self-governing part of Denmark — which is mostly covered in ice — asking advisors if it is possible for the U.S. to acquire the territory, The Wall Street Journal said Thursday, citing people familiar with the discussions.

The president has been curious about the area's natural resources and geopolitical relevance, the paper reported.

Greenland is a self-governing region of Denmark, which colonized the 772,000 square-mile (two-million square kilometer) island in the 18th century, and is home to nearly 57,000 people, most of whom belong to the indigenous Inuit community.

There was no official comment from the White House, however reactions from Danish politicians soon poured in.

Greenland's foreign minister asserted that the island was not for sale.

"We are open for business, but we're NOT for sale," said Ane Lone Bagger in a comment to Reuters.

"It must be an April Fool's Day joke," Rasmussen wrote on Twitter.

Aaja Chemnitz Larsen, one of two lawmakers in the Danish parliament elected from Greenland, also rejected the idea.

"No thanks to Trump buying Greenland! On the contrary, a better and more equal partnership with Denmark should be the way forward for a stronger and in the long-term more independent Greenland," Larsen wrote on Twitter.

Martin Lidegaard, the foreign affairs spokesman for the Social Liberals that back the minority Danish government, referred to Trump's interest as a joke but recognized the fears of using it for military purposes.

"Trump to buy Greenland?! Hopefully a joke, but otherwise terrible idea with the risk of militarization of Greenland and less independence for the Greenlandic people - in addition great loss for Denmark," Lidegaard wrote on Twitter.

Some Trump advisers say acquiring Greenland, which is northeast of Canada, could be good for the U.S., while others called it only a "fleeting fascination" from the president, The Wall Street Journal said.

Others outside the White House say Trump's interest could be a desire to secure a legacy achievement, the paper reported, and advisors wondered about the potential for research or greater military clout for the US.

The U.S.' northern-most military base, Thule Air Base, has been located on Greenland for decades.

But Greenland doesn't quite live up to its lush name — 85 percent of the island is covered by a 1.9-mile-thick (three-kilometer) ice sheet that contains 10 percent of the world's fresh water.

The world's largest island has suffered from climate change, scientists say, becoming a giant melting icicle that threatens to submerge the world's coastal areas one day.

July saw unprecedented melting of the Greenland ice sheet, with 12 billion tonnes of ice flowing into the sea.

Trump, who in 2017 withdrew the U.S. from the Paris Climate Agreement to cap global warming levels, is reportedly set to visit Copenhagen in September.

This isn't the first time the president has expressed interest in foreign properties — he has said North Korea's "great beaches" would make ideal locations for condos.