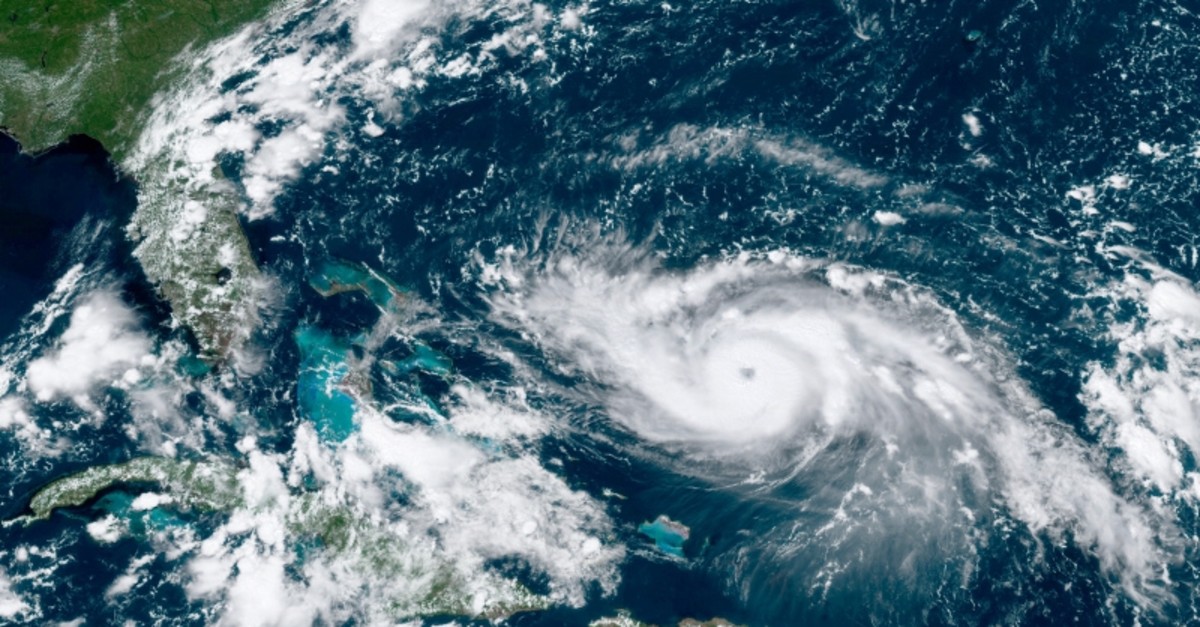 Hurricane Dorian's winds increased on Saturday to about 240 kilometres per hour, making it a strong category 4 storm that is expected to remain powerful as it churns in the Atlantic Ocean, threatening the Bahamas and south-eastern United States.

The National Hurricane Center (NHC) said Dorian's 240 km/h wind speeds were maximum sustained gusts measured near the centre of the storm, which was about 670 kilometres east of Florida on Saturday morning.

The wind-speed data was collected by planes flown by the US Air Force and the National Oceanic and Atmospheric Administration (NOAA), the hurricane centre said in its 11 am (1500 GMT) summary.

The storm is projected to intensify even more before it makes landfall in the southern Florida on Monday or Tuesday, the NHC said.

Dorian menaced a corridor of some 10 million people — and put Walt Disney World and President Donald Trump's Mar-a-Lago resort in the crosshairs — as it steamed toward Florida with the potential to become the most powerful storm to hit the state's east coast in nearly 30 years.

Becoming more alarming with every update from forecasters, the storm strengthened into an extremely perilous Category 3 in the afternoon and was expected to become a potentially catastrophic Category 4 with winds of almost 140 mph (225 kph) before blowing ashore late Monday or early Tuesday.

The NHCs projected track showed Dorian hitting around Palm Beach County, where Mar-a-Lago is situated, then moving inland over the Orlando area. But because of the difficulty of predicting a storm's course this far out, forecasters cautioned that practically all of Florida, including Miami and Fort Lauderdale, could be in harm's way.

They warned, too, that Dorian was moving more slowly, which could subject the state to a drawn-out and more destructive pummeling from wind, storm surge and heavy rain.

Trump declared a state of emergency in Florida and authorized the Federal Emergency Management Agency to coordinate disaster-relief efforts.

As Dorian closed in, it played havoc with people's Labor Day weekend plans. Major airlines began allowing travelers to change their reservations without a fee. The major cruise lines began rerouting their ships. Disney World and the other big resorts in Orlando found themselves in the storm's projected path.

Jessica Armesto and her 1-year-old daughter, Mila, had planned to have breakfast with Minnie Mouse, Donald Duck and Goofy at Disney World. Instead, Armesto decided to take shelter at her mother's hurricane-resistant house in Miami with a kitchen full of nonperishable foods.

"It felt like it was better to be safe than sorry, so we canceled our plans," she said.

Still, with Dorian still days away and its track uncertain, Disney and other major resorts held off announcing any closings, and Florida authorities ordered no immediate mass evacuations.

"Sometimes if you evacuate too soon, you may evacuate into the path of the storm if it changes," Gov. Ron DeSantis said.

Homeowners and businesses rushed to cover their windows with plywood. Supermarkets ran out of bottled water, and long lines formed at gas stations, with fuel shortages reported in some places. But the governor said the Florida Highway Patrol would begin escorting fuel trucks to help them get past the lines of waiting motorists and replenish gas stations.

At a Publix supermarket in Cocoa Beach, Ed Ciecirski in the customer service department said the pharmacy was extra busy with people rushing to fill prescriptions. The grocery was rationing bottled water and had run out of dry ice.

"It's hairy," the 69-year-old Ciecirski said. But he said he was used to commotion after working for years as a supervisor for the post office.

Dorian could prove to be the strongest hurricane to hit Florida's east coast since Andrew, a Category 5 that obliterated thousands of homes south of Miami with winds topping 165 mph (266 kph) in 1992.

An estimated 10 million people live in the 13 Florida counties with the highest likelihood of seeing hurricane-force winds from Dorian by Wednesday morning. After passing through Florida, it is expected to rake the Southeast coast through the Carolinas.

Coastal areas in the Southeast could get 6 to 12 inches (15 to 30 centimeters) of rain, with 18 inches (46 centimeters) in some places, triggering life-threatening flash floods, the hurricane center said.

Also imperiled were the Bahamas, where the sound of hammering echoed across the islands as people boarded up their homes. Canned food and bottled water were disappearing quickly. The storm was expected to hit by Sunday.

Florida's governor urged nursing homes to take precautions to prevent tragedies like the one during Hurricane Irma two years ago, when the storm knocked out the air conditioning at a facility in Hollywood and 12 patients died in the sweltering heat. Four employees of the home were charged with manslaughter earlier this week.

"I'm glad these people are being held accountable," DeSantis said, "because that sends the message going into this storm that if you have vulnerable people in your care, it's your responsibility to make sure you have a plan in place to protect those folks."

At NASA's Kennedy Space Center in Cape Canaveral, NASA began slowly moving a 380-foot-high mobile launch platform to the safety of the colossal Vehicle Assembly Building, built to withstand 125 mph wind. The launcher is for the mega rocket that NASA is developing to take astronauts to the moon.

The hurricane season typically peaks between mid-August and late October. One of the most powerful storms ever to hit the U.S. was on Labor Day 1935. The unnamed Category 5 hurricane crashed ashore along Florida's Gulf Coast on Sept. 2. It was blamed for over 400 deaths.