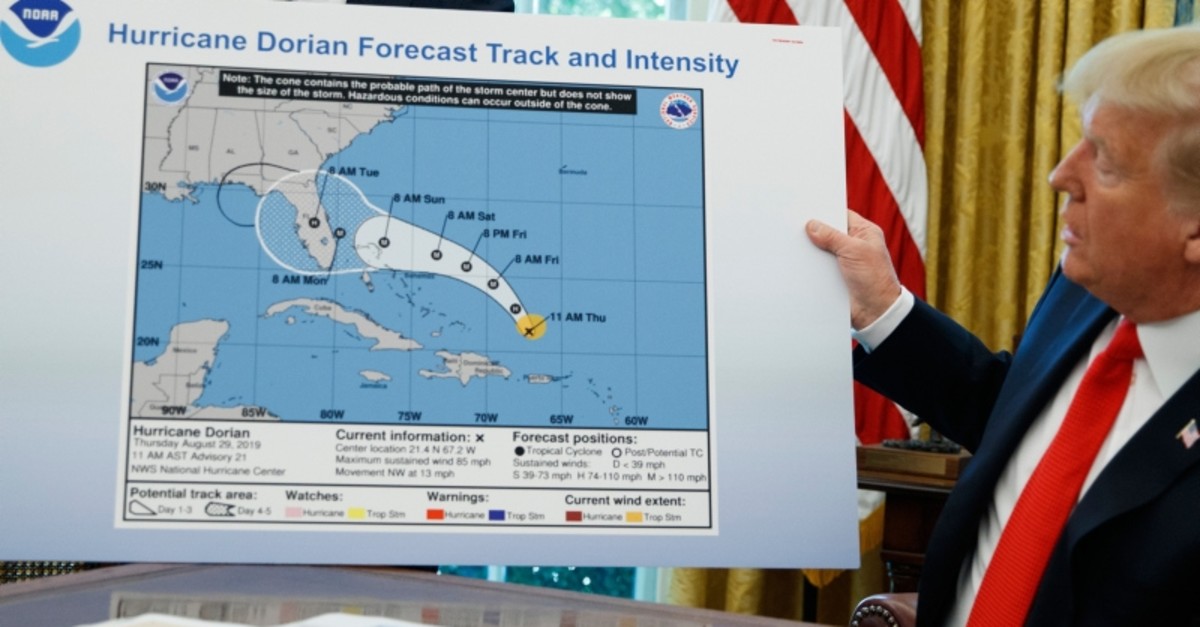 U.S. President Donald Trump holds a chart as he talks with reporters after receiving a briefing on Hurricane Dorian in the Oval Office of the White House, Wednesday, Sept. 4, 2019, in Washington. (AP Photo)
by Associated Press Sep 05, 2019 9:45 am

U.S. President Donald Trump isn't giving up on the dubious idea that Alabama faced a serious threat from Hurricane Dorian.

During an Oval Office briefing Wednesday, Trump displayed a map of the National Hurricane Center forecast for last Thursday that showed Dorian could track over Florida. The map he displayed included what appeared to be a hand-drawn half-circle that extended the cone of uncertainty over a swath of Alabama.

Trump had raised eyebrows and drawn an emphatic fact check from the National Weather Service on Sunday when he tweeted that Alabama, along with the Carolinas and Georgia, "will most likely be hit (much) harder than anticipated."

The National Weather Service in Birmingham, Alabama, tweeted in response: "Alabama will NOT see any impacts from #Dorian. We repeat, no impacts from Hurricane #Dorian will be felt across Alabama. The system will remain too far east."

Few, if any, meteorologists put Alabama in the hurricane's path. Asked Sunday if Trump had been briefed about potential impact to Alabama, Christopher Vaccaro, a spokesman for the National Oceanic and Atmospheric Administration, wrote in an email, "The current forecast path of Dorian does not include Alabama."

On Monday, Trump pushed back on skeptics by insisting that "under certain original scenarios, it was in fact correct that Alabama could have received some 'hurt.'"

And then, on Wednesday, Trump displayed the graphic with the alteration that suggested the storm could have tracked over Alabama.

Trump had no explanation for who had altered the map he displayed in the White House.

But he told reporters, "I know that Alabama was in the original forecast."

He added: "Actually, we have a better map than that which is going to be presented, where we had many lines going directly — many models, each line being a model — and they were going directly through. And in all cases Alabama was hit if not lightly, in some cases pretty hard. ... They actually gave that a 95% chance probability."

The highest probability issued for a U.S. locale for Dorian has been in the 60% range, not 95%.

Trump later tweeted a map dated Aug. 28, claiming: "As you can see, almost all models predicted it to go through Florida also hitting Georgia and Alabama. I accept the Fake News apologies!"

Brian McNoldy, a hurricane researcher at the University of Miami, responded: "He has no clue what he's talking about, or what is plotted on that map. At the time of that cycle, Alabama was at even lower risk than before, and it was barely anything to start with."

The National Hurricane Center has issued 45 advisories giving probabilities for tropical storm and hurricane force winds for dozens of cities. Alabama locations have not been in any of those wind probability advisories, although Massachusetts and Canadian locales have been listed.

"Trump should have just admitted he made a mistake and moved on!" emailed Phil Klotzbach, a research scientist in the Department of Atmospheric Science at Colorado State University.

Meteorologist Bob Henson of weather.com emailed that "Alabama was never in the five-day cone except for a tiny sliver of the southeast corner of the state at one point." But by Saturday night and Sunday, he added, that scenario had become much more unlikely.

While forecasts from overnight Friday showed a tiny bit of Alabama at the edge of the cone of uncertainty, by Saturday morning — more than 24 hours before Trump's warning about Alabama — the storm was predicted to pose no threat to the state. Trump was getting regular updates about the storm.

"If he's going to be a provider of up-to-date information, he needs to be up to date," Maue said.