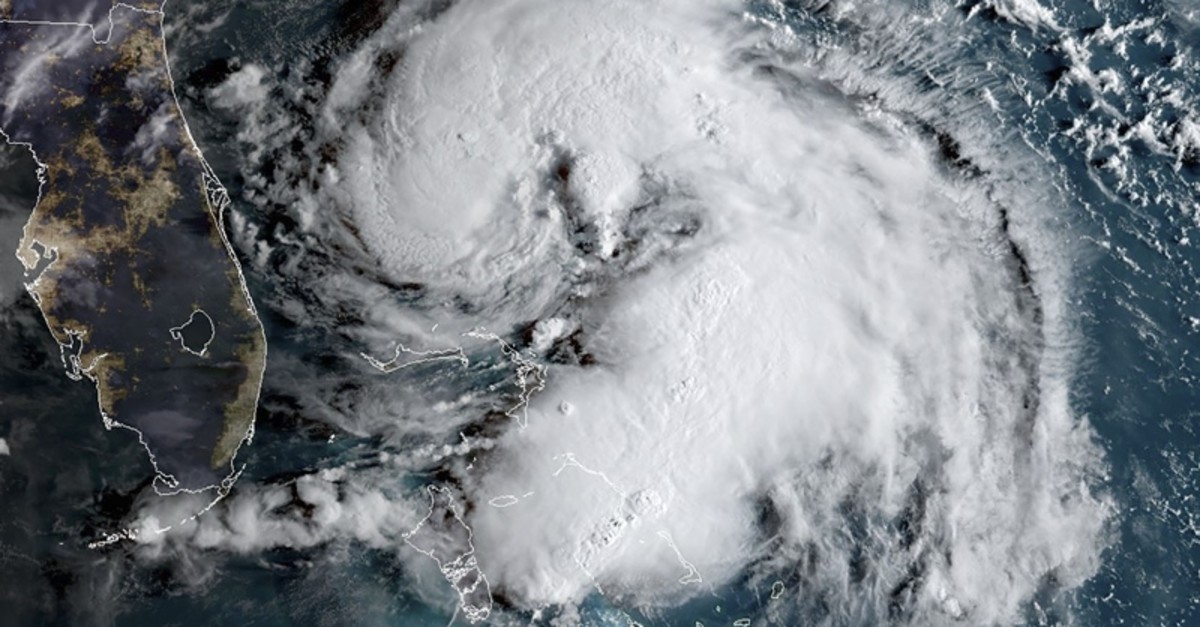 This satellite image obtained from NOAA/RAMMB, shows Tropical Storm Humberto as it moves near the Bahamas at 12:00UTC on Sept. 15, 2019. (AFP Photo)
by Compiled from Wire Services Sep 16, 2019 12:33 pm
Humberto, which gained hurricane strength late Sunday, is expected to drop another 2 inches of rain on the storm-ravaged northwestern Bahamas as it crawls away from the U.S. coast, the Miami-based National Hurricane Center said early Monday.

It will bring life-threatening waves and rip currents to parts of Central Florida and North Carolina coasts for the next few days as it packs sustained winds of 85 mph (140 kph) and heads east-northeast toward Bermuda, the NHC said. Rip currents are narrow channels of water that move away from shore at high speed, posing a drowning threat to swimmers.

It was 760 miles (1,225 km) west of Bermuda early Monday, moving at 5 mph (7 kph), and may bring heavy rains there by late Wednesday, the NHC said in its 5 a.m. advisory. It is unclear what impact the hurricane could have on the British territory in the north Atlantic.

Humberto is expected to remain well offshore as it moves to the north-east on Tuesday and Wednesday, sparing people in the Bahamas — parts of which were already devastated by the recent Hurricane Dorian — as it turns away from the island chain.

Humberto is forecasted to strengthen through Wednesday, when the eye of the storm is expected to be out in the open Atlantic.

Earlier this month, Hurricane Dorian leveled entire neighborhoods in the Bahamas, with Grand Bahama and Abaco Islands worst hit. About 1,300 people remain missing, and the official death toll of 50 is still expected to significantly rise.