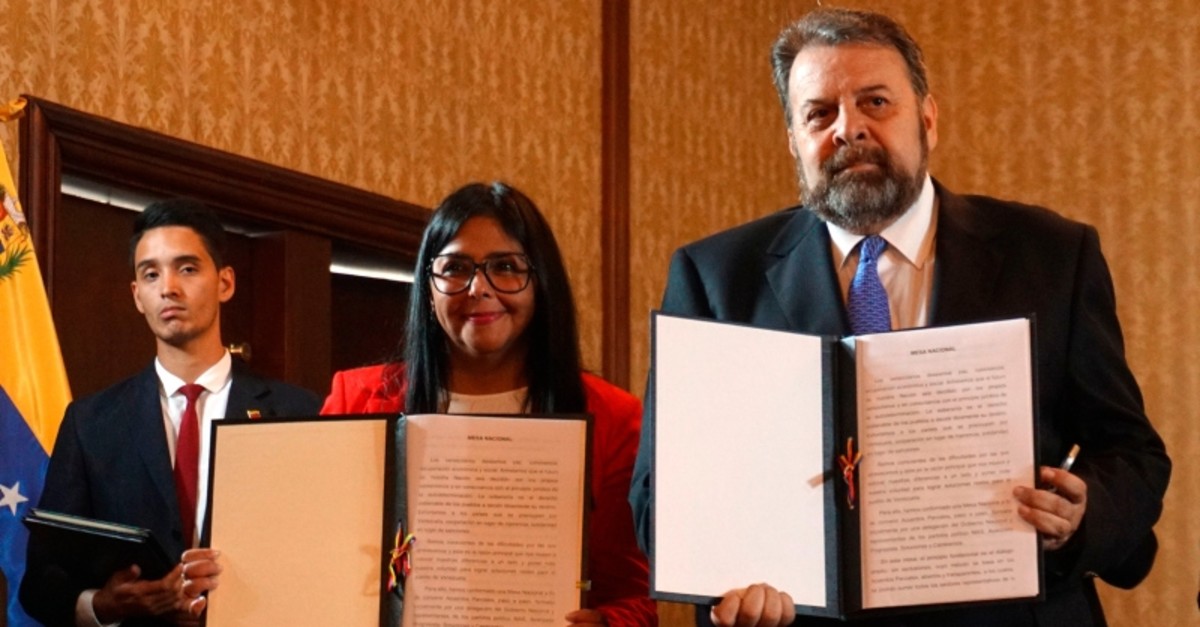 Turkey on Tuesday voiced support for a series of agreements Venezuelan President Nicolas Maduro signed with some opposition factions on Monday.

The agreements included the return of the government's deputies to the opposition-controlled legislature and the establishment of a national dialogue platform for ongoing negotiations.

"I welcome the signing of the agreements reached at the dialogue table with the opposition," Maduro said in a Facebook post in which he shared a five-page document signed by Venezuelan officials and representatives of minor opposition parties.

The signatories did not include Juan Guaido, the U.S.-backed opposition leader who announced Sunday that negotiations with the Maduro administration were dead. The agreement marks the first significant split in the Venezuelan opposition.

Turkey's Foreign Ministry reiterated in a statement Tuesday Ankara's support for a principled approach seeking a sustainable solution to the crisis through political dialogue in line with the will of the Venezuelan people.

"With this understanding, we welcome the agreement reached between the Venezuelan Government and some opposition parties in Caracas yesterday (16 September)," the Foreign Ministry said.

"We think this is an important and encouraging step toward a solution. In terms of maintaining social, political and economic stability in Venezuela, it is of great importance that all parties support this promising initiative," the statement added.

The talks agreed to on Monday will focus on reforming Venezuela's electoral board as well as finding a solution to the impasse caused by the creation of a pro-government constitutional assembly to rival the opposition-controlled congress.

Venezuela's government said Monday its deputies will return to the opposition-controlled legislature, which they walked out of three years ago.

"In the interests of deepening and extending the dialogue... the United Socialist Party of Venezuela (PSUV) and its allied factions will return to the National Assembly," said communications minister Jorge Rodriguez.

Deputies from the ruling Socialist Party walked out of the National Assembly in 2016 after losing control in elections, and the government set up its own body, the Constituent Assembly.

Guaido, the speaker of the National Assembly, earlier this year declared himself interim president with the backing of the United States and other western powers, saying elections that returned Maduro to power had been undermined by fraud.

The National Assembly has maintained its composition of 112 opposition lawmakers and 55 government loyalists.

On Sunday, more than five weeks after Maduro's government pulled out of Norwegian-mediated negotiations to seek a way out of Venezuela's crisis, Guaido said that talks had collapsed.

The government and the opposition, which is seeking Maduro's resignation, launched the talks in July. The negotiations followed a previous round of talks in Oslo in May.

Maduro called off the talks, which were initially held in Oslo and then moved to Barbados, on Aug. 7 in response to U.S. sanctions against his government.

Despite facing political and economic opposition from 50 countries including the United States, Maduro has so far weathered a failed military rebellion, street protests and a severe economic recession that has driven millions of Venezuelans to leave the country. Maduro maintains the backing of Turkey, Russia, China, Iran, Bolivia and Mexico.