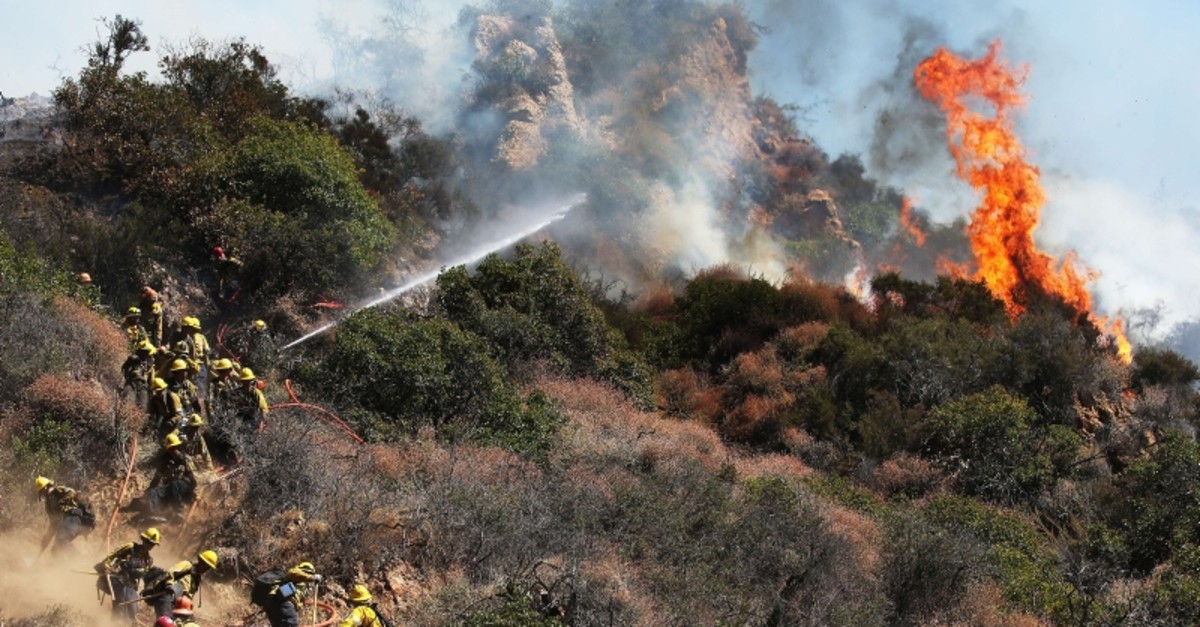 Firefighters work during a wildfire threatening nearby hillside homes in the Pacific Palisades neighborhood on October 21, 2019 in Los Angeles, California. (AFP Photo)
by Oct 22, 2019 2:34 pm

California firefighters worked through the night into early Tuesday to tackle wildfires threatening people's homes, prompting the evacuation of hundreds of residents in the area.

Live aerial video footage broadcast by KABC-TV showed flames raging along a ridge-line at the edge of an affluent beach-front neighborhood located between Santa Monica and Malibu about 18 miles (30 km) west of downtown Los Angeles.

Initially, a mandatory evacuation was ordered for about 200 homes in the Pacific Palisades community, as ground teams and helicopters worked on putting out hot spots and carving a containment line around the fire zone's perimeter.

However, at around 8 p.m., the Los Angeles Fire Department said all evacuation orders had been lifted from the Palisades fire, and residents could return home.

Los Angeles Fire Department spokesman Brian Humphrey said winds were relatively light, helping to keep the blaze in check by reducing the amount of burning embers blown into the air.

Meanwhile, east of Los Angeles in San Bernardino County's Little Mountain area, a 20-acre brush fire that broke out on Monday evening and destroyed three homes, damaged six more and threatened others, fire officials said. The cause of the fire is not known.

Four residents were hospitalized for smoke inhalation or minor burns, the San Bernardino Sun newspaper said. Some residents in both communities tried to protect their property with garden hoses, spraying water on roofs.

San Bernardino County Fire Battalion Chief Mike McClintock warned residents against trying to fight the fire themselves, media reported. "The biggest thing for us is if we ask people to evacuate, we want them to evacuate,” he said. "A garden hose isn’t going to stop a rapidly spreading fire.”

The blazes came about two weeks after a major wind-driven wildfire scorched nearly 8,000 acres (3,200 hectares) along the northern edge of Los Angeles, damaging or destroying dozens of structures and prompting evacuations of some 23,000 homes. Assistant Fire Chief Patrick Butler said forecasts were for strong, dry winds to return Southern California on Thursday.